The End of UK Dolphinariums - Sometimes History Should Repeat Itself 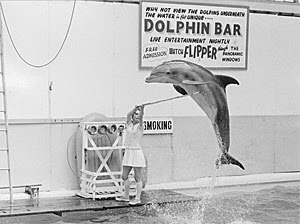 In the 1970's there were at least 36 dolphinariums and traveling dolphin shows in the UK.

The first two purpose built aquaria for cetaceans where built in 1963 at Flamingo Park Zoo in Yorkshire and at Marineland built in the northern sea-side resort of Morecambe.


During the 1960’s and 1970’s dolphin shows became one of the most popular forms of entertainment in Britain with over 30 shows running with 300 dolphins in captivity. It was during this time that concern and awareness grew over the negative aspects of captivity, creating a large amount of media interest and public support toward ending the practice. In 1972 the United States also created the Marine Mammal Protection Act which made sourcing of wild dolphins for dolphinaria extremely difficult and expensive. Without a law to protect dolphins, the US had been a prime supplier for the captivity ' industry'. With tighter regulations it became more costly to obtain an animal from the wild, a factor for an operator when considering if a show could continue to replace a regular dying star attraction and remain profitable. This factor probably closed a lot of the smaller, less profitable facilities.

The people of the UK also became aware that something was wrong in those tanks and picketed and demonstrated at marine parks across the country. During this time there was the famous Penn Cove captures in 1970, and a strong anti whaling movement and people were becoming aware and were not afraid of saying so.

By the mid 1980s, only six dolphinaria remained, Knowsley, Whipsnade, Morecambe, Brighton, Windsor and Flamingo Land and the early 1980's Greenpeace itself usually more preoccupied with anti-whaling, did  launch a private prosecution against Flamingo Land for breach of an import license. Doug Cartlidge an ex -trainer was at this time a rather lone battler against UK dolphinaria, challenging the Department of the Environment and local councils responsible for issuing operating licenses under the Zoo Licensing Act.

A significant factor in the closure of the remaining dolphinaria came in 1985.

After concerns raised about the care of cetaceans in the UK by various animal and environmental groups the then Department of the Environment, now part of DEFRA, commissioned biologists Dr Margaret Klinowska and Dr Susan Brown to research and review the keeping of these animals in UK zoos and aquaria.


Klinowska and Brown's report 'A Review Of Dolphinaria' was published in 1986 with various recommendations to be implemented by those holding captive cetaceans by no later than 1993.

By this time there were only 4 dolphinariums left Morecombe, Brighton, Windsor and Flamingo land.

Orca Winnie's move to Windsor was actually a form of "payment", as Sea World had promised a small Orca to Windsor in exchange for their large male Winston, whom they had taken when looking for a breeding bull for their collection.

Winnie remained alone at Windsor for several years following Hoi Wai (the remaining whale from her pod) was sold in 1979. During that time, a few Dolphins, kept in an adjacent pool, were her only social contact. A few years later, a teenage male named Nemo moved in. unfortunately, instead of providing companionship for Winnie, Nemo terrorized her. Already a shy, ready-to-please whale, Winnie's soft temperament made her an easy target for Nemo's rage. This lasted over a year, until Nemo died of blood cancer.

During Winnie's 13 years at Windsor, she was routinely kept half-starved in order to insure her cooperation in performances. She was also usually in a state of depression, resting listlessly at the bottom of her shallow pool. These things, combined with the loss of her pool and pod mates, caused Winnie to end up a very confused and depressed whale.

Then, in 1991, Sea World, who had captured her and given her to Windsor, got her back. With the passing of new laws in Britain, keeping Marine Mammals captive became almost impossible. Windsor, with no way to expand her pool, choose to give her back to Sea World. Sea World of Florida thus imported her on a breeding loan.

In 1992 Windsor went into receivership and
The dolphins were relocated to Dolfinarium Harderwijk in the Netherlands.

Missy and Silver at the Brighton Dolphinarium


and Rocky at the Morecombe dolphinarium.

The ethical arguments against keeping dolphins in human care persuaded most tourists not to patronize Marineland, and the city council to withdrew the dolphinarium’s operating license. The business had no choice — its dolphin display was no longer viable. Losing ticket sales, the management of Marineland eventually agreed to sell the dolphin for £120,000, money that was raised with the help of a number of animal charities, including the Born Free Foundation, and supported by the Mail on Sunday, which launched the "Into the Blue" campaign to free Britain's captive dolphins.

In 1989, a huge 4000 signature petition calling for “Rocky” the bottlenose dolphin’s release from captivity at Morecambe’s Marine Land was handed to the UK government. By 1991, "Rocky’s" case became one of the most publicised calls for release into the wild with huge amounts of media coverage, public protest and celebrity support. This lead to the eventual closure of Marine Land and the creation of the "Into the Blue" project which saw "Rocky" and two female captive bottlenose dolphins, "Missie" and "Silver" relocated to a rehabilitation sea pen and then released in the Turks and Caicos Islands in September 1991. Within days Rocky was seen swimming with a pod of wild dolphins.


Flamingo land at the time was quite a big concern in the UK dolphin industry.
In 1965 Hick decided to float the zoo on the UK Stock Exchange and became Associated Pleasure Parks.

In 1967 a larger facility was constructed that over a number of years then housed bottlenose dolphins and the male killer whale 'Cuddles' who arrived in November 1968. The park also now owned and operated a zoo and marineland at Cleethorpes which opened in 1966 and for a period of time owned Dudley Zoo which displayed dolphins and also housed 'Cuddles' who was moved there from Flamingo Park in May 1971. The park was now owned by Scotia Pleasure Parks a diversion of Scotia Leisure whose board of directors included Don Robinson who was the also the owner of the Scarborough Marineland and Zoo.

From 1975 until early 1977 the dolphinarium, which had been rebranded Ocean World, was operated and the dolphins supplied by Jervale Ltd a company owned by filtration engineer John Nolan and his wife. Jervale also operated a dolphin holding facilities in South Emsall for a short period of time in 1974 and supplied animals for Ocean Park in Seaburn, Sunderland. In 1975 two of their dolphins were involved in dolphin show in Taiwan for three months returning to the Flamingo Park in July that year and three week Christmas show in Sheffield Road Baths in Rotherham. They also supplied a sea lion show in the summer of 1975 at the now disused dolphinarium at Porthcawl. In May 1976 the Nolan's transported a dolphin to Yorkshire Television Studios in Leeds which was displayed a portable tank for the popular science programme "Don't Ask Me". The animal safely returned to Flamingo Park the next day.
The last three dolphins arrived in 1984 - at the now renamed Flamingoland - and were owned and cared for by Dolphin Services UK. The animals remained on site until the 1993 when the dolphinarium finally closed due to new husbandry legislation for UK cetaceans; the pool failed to remain legal due to it not being deep enough.
Their slave-trade owner would never allow them to be free as Rocky was,  instead the dolphins were moved to Kolmarden in Sweden on a breeding loan. Some years later they were still there, two had produced captive calves and one was barren. That dolphin was simply moved, a seeming mere utility, to a dolphinarium in Italy. No thought of the trauma caused to three dolphins together most of their lives.
Despite this the last captive dolphin had now left the UK.
The overwhelming public response to the “Into the Blue” campaign, together with the findings and recommendations of the UK Department of Environment’s report, led the Government to develop strict minimum standards for UK dolphinaria, covering factors such as pool size, feeding, water quality and handling, which were added as supplementary standards accompanying the Zoo Licensing Act (1981) in 1990. Existing UK dolphinaria were incapable or unwilling to meet the new standards laid out in the legislation, and therefore closed. In principle, it was not illegal to keep cetaceans in this country, but the standards of care outlined were so strict that no establishment in the UK was able to meet them. Since that date, no dolphinaria have been constructed in the UK.
The combination of protests and lobbying of government and regulation changing officials brought about the demise and closure of the UK dolphinariums. People decided that it wasn't right to buy tickets to such places and closed the majority down that way, whilst others needed protests and petitions.
Once regulations have been changed the dolphinariums have no option but to comply or close, something other countries should take into account.

Today in the UK our theme parks are still making money, people go for the rollercoasters and rides. Ironically Blackstone the group who was the major shareholder in Seaworld, has switched allegiance to Merlin Entertainments who are the owners of the majority of UK themeparks, proving that captive orcas and dolphins are not the way forward after all.

If the UK can stand together and close down these horrible places then so can other countries.
The parks aren't the killers of dolphins and whales alone, its the ticket buyers and those who are completely apathetic to the plight of those creatures who are the biggest killers of those dolphins and whales.
Without the visitors money there would be no tanks and with peoples added voices and signatures to government agencies,  there would also be no tanks. No tanks no hunting and killing of dolphins, you are all park of a chain that needs to be broken. That break starts with YOU. 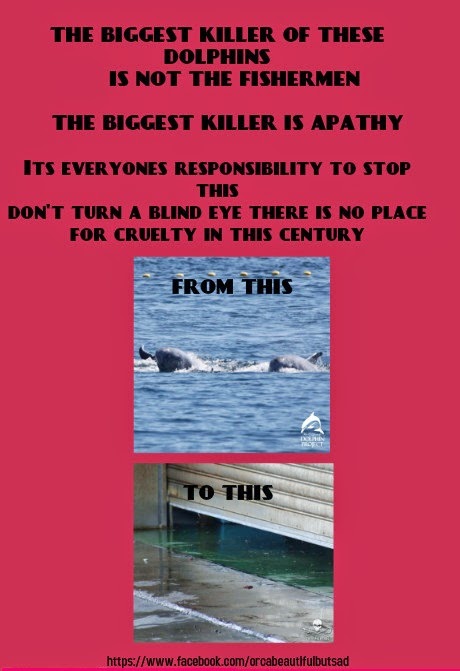