Seaworld Helping to Train Narnia and Nord the Russian Orcas

After initially denying the 2 orcas were at the facility, it was revealed here that they were and the conditions they were being kept in was revealed.


Now things are finally starting to come into the open izvestia.ru/news has recently reported on the Russian orcas being held in Moscow.

Within six months before to orcas at ENEA will let visitors behind them will be to monitor the Internet. As told "Izvestia" deputy general director of LLC "Sochi dolphinarium" Yulia Frolova, the company plans to install cameras in the aquarium which will be broadcast around the clock in the video network.

Now orcas Nord and Narnia are in established on the territory of ENEA hangar in two temporary pools interconnected. The animals will be transferred to the under construction now oceanarium in December 2014. But visitors to them will start in the summer of 2015, when the Oceanarium is finally ready. Once the animals will move indoors cameras will be installed, and the video from them is supposed to be supplied to the site of "Sochi dolphinarium."

- I think that will be broadcast around the clock, if the problems with the Internet would not - said Yulia Frolova.

At the same time on the tour until the summer of 2015 to let the visitors, according to her, it is impossible.

- Killer whales have become accustomed to people who work with them - she said. - But if you go down a stranger, he may, for example, to make a gesture that the animals do not like and which they perceive as a threat. They are predators, and they will defend themselves - can bite, scare, kick tail on the water.

It is planned that during the performances visitors will not be located in close proximity to animals.

According to Yulia Frolova, orcas have already started learning the tricks of eight under the guidance of coaches.

- The program is currently being developed, - she said. - Will jumping, cascades, perhaps using some props. With animals have Russian coaches, and they are consulted in the American company SeaWorld, which has in this matter considerable experience.

Orcas were brought from the Far East in December of 2013. But the fact that they are in Moscow, the media learned only recently from zoozaschitnikov who complained to the police about poor maintenance of the animals. ENEA Administration denied the charges, saying that the orcas are in perfect conditions under the supervision of veterinarians. It was reported that it was impossible to bring orcas later to the discovery of the oceanarium, as further transport orcas possible only while they are young. Now their sizes - 4.5 and 5.5 m.

Once again Seaworld the fabulous conservationists have not advised these people that it is wrong to capture whales from the wild, especially since they so often say they haven't captured one themselves for a long time. Seaworld haven't advised them that science has moved on and they are under considerable pressure themselves as people are now aware of their family structures and their need to be with their mothers especially as their pod would be easy to locate as their capture point is known and the Russian wild orca specialist are aware of all the advancements.

Seaworld instead have chosen to offer their advice into how to make these captives perform tricks for an audience, the very thing that is damaging their own business.

Seaworld have the perfect opportunity to stop the captures as they know full well that once one dolphinarium opens with captive orcas, they will spread across the country as they did in their own part of the world when they first opened. But once again Seaworld has chosen to not be on the right side of history and is helping this Russian company instead.

Maybe this is why -

SeaWorld’s plans to expand internationally, with new parks in India, Russia, and the Middle East. The company has signed a letter of agreement with Village Roadshow (VRL:AU), an Australian film studio and theme park operator, to expand its brand outside the U.S.

India has banned the keeping of captive cetaceans, the Middle East have always been Taiji buyers so there would be no problem there and now they are helping wild caught Russian orcas to learn tricks for an audience and spend the rest of their lives in a pool.

The presentation by Village Roadshow has a number of flaws however, the first being this -

The second being this, India has stopped cetacean shows. 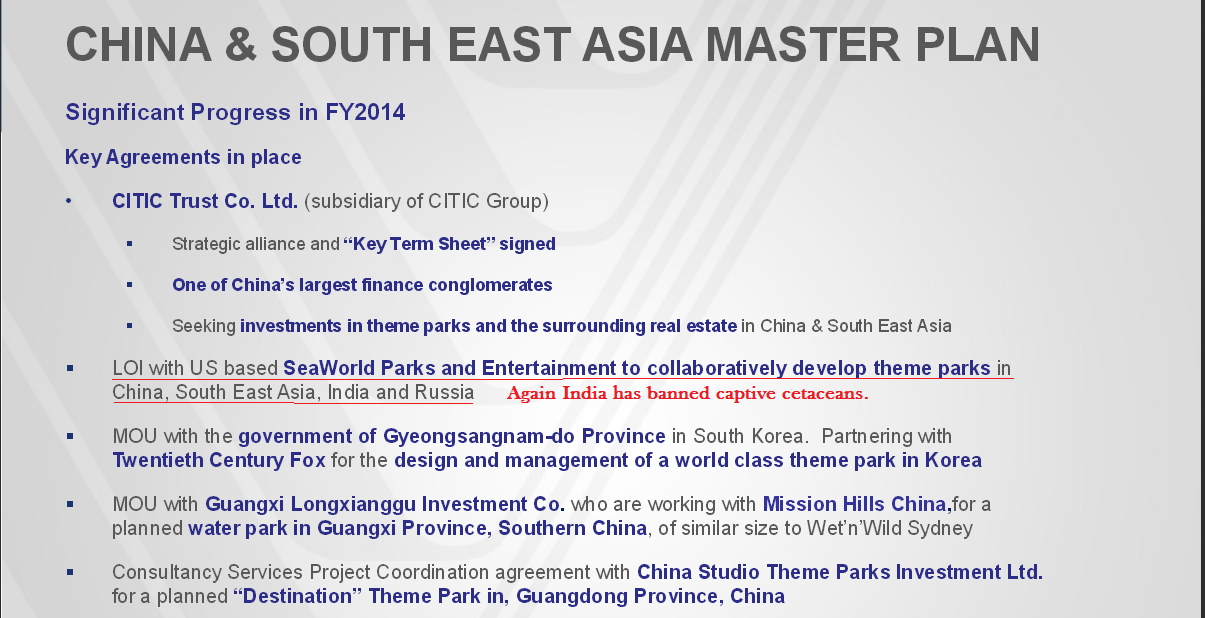 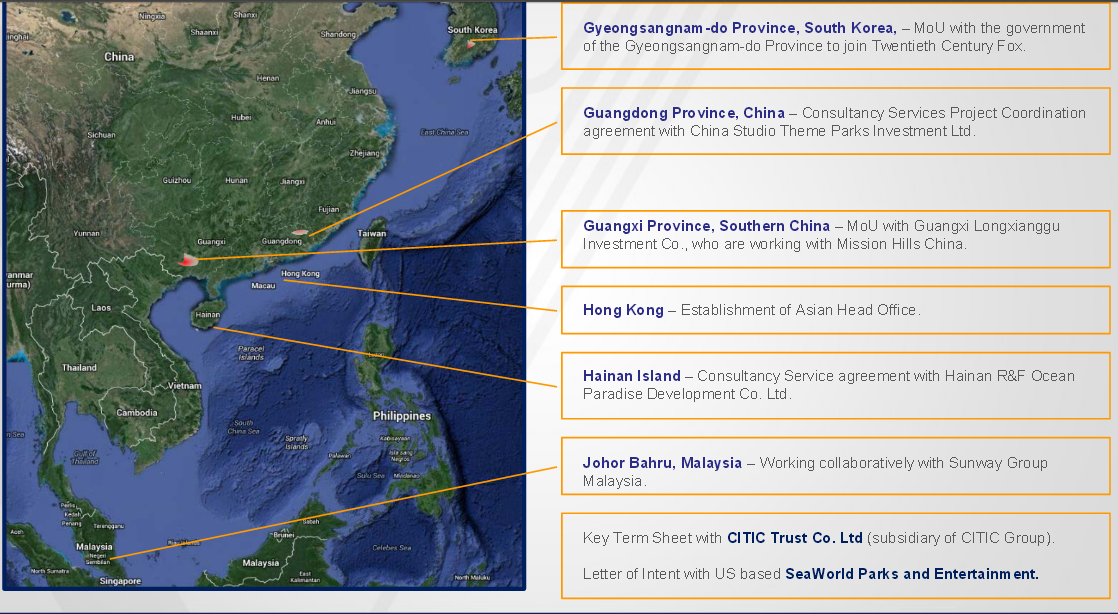 and lastly they have only issues a letter of intent to Seaworld US.
A letter of intent (LOI or LoI, and sometimes capitalized as Letter of Intent in legal writing, but only when referring to a specific document under discussion) is a document outlining an agreement between two or more parties before the agreement is finalized. So nothing is finalized as yet.
Seaworld's performance is not as stated in the presentation and their persistence to not acknowledge the advancement in science and stick to their old business model could well be their downfall here too. Especially now they have said nothing about the capture of wild Russian orcas, knowing full well what damage they did in taking the young of this highly family orientated beings when they first started out.