Proof from Taiji - Its not Tradition, its not Culture, its about Captives 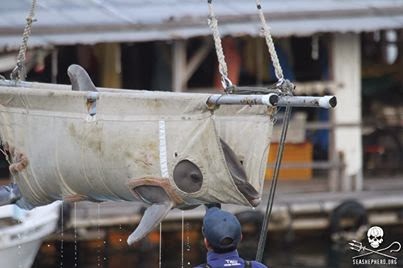 PROOF FROM TAIJI ITSELF - ITS ALL ABOUT THE AQUARIUM BUSINESS!!

The Japan Fisheries Agency included the Pacific White-sided dolphins in the catch-quota of the drive hunt in 2007 and this still stands today.
As a reason for adding this species, the notification cites “a strong request from fishers in recent years to allow their capture.” With the generalization ‘fishers,’ they are referring to the small group of dolphin killers of the Isana Union in Taiji.

On September 29, 2005, a 13-person delegation from Taiji Town, including its mayor Kazutaka Sangen, Mr Mihara, Chairman of the Council of Taiji Town and Mr Lin Keji curator of the Taiji Whale Museum visited the Beijing Aquarium.

In an October press release, the Beijing Aquarium proudly announced their friendship with Taiji and ‘the two sides plan to build a platform to archive the imported marine mammals in the aquariums all over China’ and to ‘have negotiations on the import of killer whales’.

Almost all Cetaceans in Beijing come from the wild and the Beijing Aquarium also serves as a holding facility for dolphins entering China on their way to other parks.
China is the biggest importer of dolphins from Taiji with a staggering 117 dolphins purchased in just the 3 years of 2009, 2010 and 2011.

Mr Mihara also cast his opinion on the Cove   despite the Taiji town liking the film.

Mr Mihara is an avid whaling fan, which is probably one of the reason the hunt continues in defiance. His IWC statement can be seen here

One of the other collaborators in the mix in Mayor  Kazutaka Sangen
.
Mayor Kazutaka Sangen of Taiji, Japan could care less about the effects of mercury and methyl-mercury on the brain. Sangen-sama is building a specially designed slaughterhouse just for dolphins. He wants to kill more of them, he needs a market for the flesh, and the government seems to be quite willing to buy his dolphin meat for the school lunch programs as a very cheap source of protein for growing children. Yes, protein for strong muscles, with mercury thrown in for a weakened brain. Maybe that is what the government wants-weak brained labourers and future dolphin killers. Who knows? What we do know for certain is that deliberately feeding poisoned meat to children in Japan is seemingly okay with the government. They are doing nothing and do not wish to know anything about it.
Mayor Sangen is stifling dissent with threats of violence. When two courageous Japanese Councilmen, Junichiro Yamashita and Hisato Ryono, spoke out publicly against the feeding of mercury-contaminated dolphin meat to children. Read about what the said HERE
Sangen-sama's threats quickly shut up Ryono-sama, who now refuses to mention the issue. Only Yamashita-sama remains with the courage to continue to condemn the dark schemes of Mayor Sangen, the dolphin butcher of Taiji. The dolphin meat WAS taken off the school lunch menu.

In response to Caroline Kennedy's condemnation of the hunt he said '"There always are the people who say it's wrong and it's right, but what we have to see is if fishermen are hunting endangered species or not. They don't. We are fishing under the permission just like the US does." The rest of the report is here

Lastly there is Miyato Sugimori, administrative chief of the Taiji Town Fisheries Association who said ''We have no intention to stop hunting dolphins,”  “Westerners eat cows, Australians eat kangaroos,” Sugimori said. “Japan, including Taiji, is surrounded by ocean, so we eat things from the sea which include fish, whales and dolphins. There’s nothing wrong with that.”  Report here

The statement that stood out to me though was this one -  Sugimori said if dolphin hunting was banned, young people may choose office jobs that pay more rather than join his association, which has an average age of 68. The association filed for bankruptcy and was restructured in February 2007.

Nothing like lining your own pocket, keep them fishing so they stay in your union.

In my opinion these parks and men collaborate purely for money, with no regard for the lives they destroy, the families they rip apart and the dolphins they sentence to a life of slavery.

Selfish marine park visitors provide the want for these dolphin and whale captives, by waving their ticket monies at the parks.

Marine Parks across the globe, see the likes of Seaworld making money and they want some of the same, its nothing to do with the animals.  Underhanded dealing are the norm, Morgan, Kirara as examples.

The Associations supposedly governing the parks and trainers make money from members, what is in it for them to ban people who pay into the Association?

As for the officials of Taiji, Mayor Sangen wanted to build a new meat factory, Mihara is building a dolphin broker platform with China, and Sogimori doesn't want anyone to not be fishing as then they won't be paying into his bankrupt union.

It has nothing to do with Tradition, Culture, or even the Japanese people, it is a few bullies who try to keep people quiet to line their own pockets, from the top to the bottom.

In the meantime, the dolphins can't speak out but we can and do, and will continue until the injustice stops once and for all.
Posted by Unknown at 05:22