Important Information About Working with, Swimming with and Touching Marine Mammals.

An interesting report has been drafted for the United States Marine Mammal Commission, showing the risks to humans from working with and swimming with marine mammals.

During certain recreational activities the public may also be at risk of acquiring diseases from marine mammals.Thousands of tourists participate in “swim-with-the-dolphin” programs each year.
In 1989, over 8,000 people participated in these programs in the United States alone (National Marine Fisheries Service 1990). While information on the injurious attacks made by dolphins on humans is available, little attention has been paid to the potential for transmission of infectious diseases.

The purpose of this study was to evaluate the risk of human injury and illness associated with marine mammal captive management and research activities by surveying a sample of people involved in these activities. Questions regarding respondents’ association with marine mammals revealed the nature of occupational contact (research, rehabilitation, zoo and aquaria employment,and “swim-with-the-dolphin”
programs.
If those who work with them on a daily basis show signs of trauma, injury and disease.

Why have they not passed that knowledge on and STOPPED the general public from having contact with these animals?? It's their business! 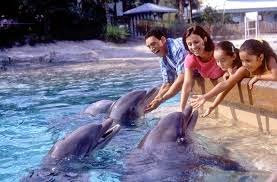 IMPORTANT INFORMATION ABOUT MARINE MAMMALS AND YOU

Like most animals, marine mammals can carry microbes (bacteria, viruses, fungi) that can cause illness in humans. Many marine mammals that appear healthy and normal can carry organisms that are dangerous to humans. Marine mammals have been shown to carry many of the pathogens we associate with food poisoning, such as E. coli, Salmonella, and Listeria. Like other wildlife, seals and sea lions can shed the protozoan, Giardia in their feces. Giardia can cause diarrhea and other symptoms in humans. In rare cases, marine mammals may be infected with very dangerous pathogens, like the rabies virus and the organism that causes tuberculosis.

Pathogens known to be transmitted from marine mammals to people

Mycoplasma found in seals can cause “seal finger” in humans. This painful and potentially serious disease can result from a seal bite or the infection of a pre- existing wound. Diligent hand washing is the best defense with infections often responding to tetracycline treatment.

Seal pox is a disease of stranded seals and can be encountered in rehabilitation centers. It can cause pox sores in humans that may persist for up to a year. There is no known effective treatment.
Leptospirosis contracted from seals and sea lions can cause serious disease in humans.

Reported injuries and illnesses in people who work with marine mammals

A total of 483 marine mammal workers responded to a recent survey about their health. The majority of respondents identified research as their primary type of marine mammal contact.

The prevalence of four major health outcomes (trauma, skin rash or reaction, respiratory illness, and prolonged malaise) was calculated from the total number of respondents. The major outcomes were further examined for severity and occurrence subsequent to or as a result of marine mammal contact.

Trauma
''cartilages broken for 8 weeks and holidays ruined as it was only
my 3rd day. I almost died as couldnt breathe...and all my body
was in stroke.''

52% respondents suffered a traumatic injury as a result of working with marine mammals. Injuries were located on
the extremities 218/251 (89%),
on the torso or abdomen 20/251 (8%),
and on the face 11/251 (4%).
Ninety people, 36% of those reporting trauma, suffered one or more severe injuries including: a deep wound (77), a deep wound requiring stitches (26), or a fractured bone (10). Other severe injuries described included a dislocated shoulder and an amputation. Thirty-eight people, 15% of those reporting a traumatic injury, reported having been bitten. Of the reported injuries only 5 were self-inflicted traumas, such as needle sticks and necropsy knife cuts. 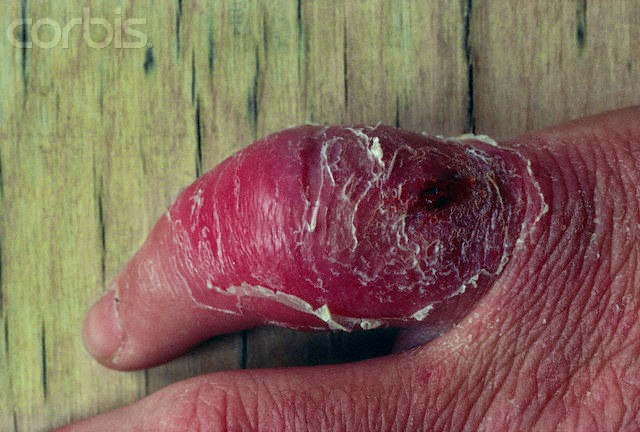 This severity was illustrated by one of the surveys participants who reported suffering a prolonged malaise of more than six months with “life threatening toxemia/encephalopathy” as a sequelae to a “minor skin cut” acquired while working with a harbor porpoise carcass. Erysipelothrix rhusiopathiae was cultured from the infection, and despite treatment with 3 different antibiotics, amputation of the affecteddigit “proved life-saving.”

18% of the total respondents, reported experiencing respiratory illness during the time they worked with marine mammals. Of those, only 20% (18/89) believed their ailment to be the result of marine mammal contact.  Increased frequency of contact was associated with a higher risk of respiratory illness with workers exposed more than 50 days per year being 3 times more likely to have a respiratory illness than workers with less annual exposure.
One survey participant suffered for more than 6 months from a tuberculous pneumonia that her physician attributed to her work with dolphins. Unfortunately, the documentation provided in the survey response did not allow for other possible routes of transmission to be examined. Nonetheless, this rehabilitation volunteer experienced night sweats, weight loss, chronic fatigue and anemia; she was treated for 9 months with isoniazid for the tuberculosis, and “dozens of antibiotics” for secondary bacterial infections. She expressed that she “had always been an extremely healthy person” but now is in search of continued medical assistance from “a doctor who can completely help.”

Thirty people, 6% of all respondents,reported having suffered prolonged malaise during the time in which they worked with marine mammals. Of those, 30% (9/30) believed their illness was due to marine mammal contact. Many of these cases were never definitively diagnosed despite the workers seeking medical treatment. There were no statistically significant risk factors associated with prolonged malaise.

The most common health problems reported by marine mammal workers responding to the survey were traumatic injuries. Over half of survey participants reported having been injured by a marine mammal. The analysis of risk factors suggests that individuals who worked more than 5 years and those exposed to marine mammals more than 50 days per year were at highest risk for injury. It is logical that prolonged and frequent exposure to marine mammals increased risk for injury proportionately with frequency of contact. Most injuries described were cuts and scrapes, followed in frequency by bites.


What you can do:

Care must be taken to avoid all possible routes of exposure to marine mammal infections . Although bites and contact with existing wounds are the most common routes, infections can occur through your mouth, eyes, respiratory system and skin.
Report any animal bite, scratch, or other significant exposure to marine animal blood, saliva, or other excretions to the appropriate supervisor.
If you develop an illness or other condition that could be caused by exposure, be sure to tell your physician that you work with marine mammals

Regardless of experience and training, marine mammal workers are at risk of injury and infection. Exposure to marine mammals can mean exposure to the infections they carry.

Don't put yourself or your family at risk in the first place. Working with and rescuing the animals and using them for entertainment and pleasure are two different things, the latter is not a necessary risk.


Now you are aware that these sorts of injuries and infections can happen to professional people working with the marine mammals do you really want to put your self or your families at risk doing any of these?

Girl bitten by dolphin at Seaworld


The case against Dolphin Therapy by WDC can be seen here

Now do you want to put your children at risk of the above?


This is Taiji, Wakayama Prefecture, Japan, where the majority of the worlds dolphins now come from. If you didn't buy tickets to do the things above, putting yourself and the dolphins at risk, this wouldn't have a market and wouldn't happen. Straight from their ocean home, to a tiny tank to a buyer.