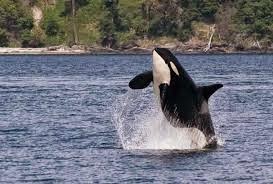 This has to be one of the most sickening things I have seen. The death of a beautiful Southern Resident used to twist the truth to promote Seaworld.

Once again it has to be put right as Eric Davis seems obsessed with his PETA distracting agenda.

While the world celebrates the Killer Whale just born at SeaWorld San Diego, a sad reminder of the harsh realities for wild whales has washed ashore.
The world did not celebrate at all. Posts, news articles, science


Off the coast of Vancouver Island in British Columbia, the body of J32, also known as Rhapsody, an 18-year-old member of the J Pod from the Southern Resident Killer Whale population has washed ashore.
J32 was believed to be pregnant, and while no known cause of death is known right now, it is an immediate reminder of the immense pressure that wild whales experience everyday.

Incorrect information yet again!
The Southern Residents are the ONLY orcas listed as endangered, mainly because their range is so close to human population and the dams have blocked up the salmon runs which they rely on.

''Southern Resident killer whales are the only known resident population to occur in the U.S. Southern residents are comprised of three pods: J, K, and L pods. The Southern Residents are considered one "stock" under the Marine Mammal Protection Act (MMPA) and one "distinct population segment" (therefore, "species") under the Endangered Species Act (ESA).
The Southern Resident Killer Whale population is currently estimated at about 80 whales, a decline from its estimated historical level of about 200 during the late 1800s.
Beginning in the late 1960s, the live-capture fishery for oceanarium display removed an estimated 47 whales and caused an immediate decline in Southern Resident numbers.
The population fell an estimated 30% to about 67 whales by 1971. By 2003, the population increased to 83 whales.
Due to its small population size, NMFS listed this segment of the population as endangered under the Endangered Species Act (ESA) in 2005 and designated critical habitat in 2006.
Their range during the spring, summer, and fall includes the inland waterways of Washington state and the trans boundary waters between the United States and Canada. Relatively little is known about the winter movements and range of the Southern Resident stock. However, in recent years, they have been regularly spotted as far south as central California during the winter months.

The effects of the Salmon Run on the Southern Residents can be seen here.  FINAL REPORT OF THE INDEPENDENT SCIENCE PANEL.

Please make sure you have signed the petition to take down the deadbeat dams and let the salmon run properly again, it is important to the Southern Residents. HERE

This is the point where the article starts to turn sick and twisted to promote the Seaworld agenda. Before moving onto that I feel the need to make Eric Davis aware that PETA are not the only people standing against Seaworld.
The way to make that perfectly clear is to ask one simple question.

WHAT DOES PETA HAVE TO DO WITH THINGS THAT HAVE HAPPENED IN SEAWORLD'S ORCA TANKS?

People protest Seaworld because of Seaworld, because of their dead orcas, injured and dead trainers, offspring being taken from mothers, orcas as young as 6 becoming pregnant. Lies being uncovered by court transcripts, necropsy reports, NOAA, citations. Those things have been done by Seaworld not by PETA.

What makes you think Ellen Ericksen is a radical activist because she protests outside Seaworld San Diego?
Has she ever said she is a PETA member?

This isn't the first time Awesome Ocean has targeted Ellen Ericksen  I debunked a pervious article where
bullied her for her strong beliefs that captivity is wrong. See here

After speaking to Ellen  Ericksen regarding the bullying from Eric Davis and Awesome Ocean she
gave the following statement...

''Yes PLEASE use my name since he has been targeting me also. My last name is also spelled
wrong in his article.  I have been organizing protests there every holiday for years, I don't work
for PETA although at times  we do use there materials.
I was on the news this week about the birth of the baby it aired twice, which has probably
prompted Awesome Ocean to include me in the article.
I have a great respect from the media outlets here and the public. 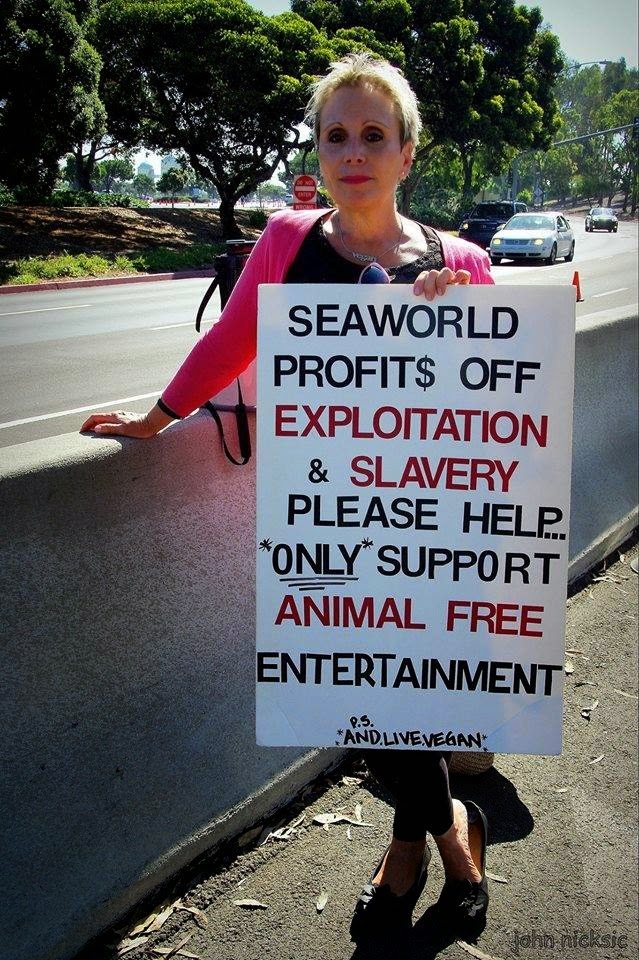 Earlier this week when SeaWorld announced the birth, radical activists "mourned" the birth at SeaWorld, painting a fantasy fairytale-like picture of wild orcas.

However, the harsh reality is wild Orcas are in serious trouble.
Wild orcas are not in serious trouble, this is misleading people. A trip to wikipedia can tell you that.
''Worldwide population estimates are uncertain, but recent consensus suggests an absolute minimum of 50,000.[2][32] Local estimates include roughly 25,000 in the Antarctic, 8,500 in the tropical Pacific, 2,250–2,700 off the cooler northeast Pacific and 500–1,500 off Norway.[90] Japan's Fisheries Agency estimated 2,321 killer whales were in the seas around Japan''

The Southern Resident Killer Whale populations which include J, K and L pods is now down to 77 members from a peak population of 98 members in 1995; all the while radical activists keep trying to defame SeaWorld. It is time for that to end.
You would use the decline of the Southern Residents to stop people 'defaming' Seaworld. How sick is that, as said earlier in the article people protest Seaworld because of thing's Seaworld have done including raping the Southern Residents for their entertainment business.

Here at Awesome Ocean, have been reporting about premature orca deaths here since we launched this past summer. We have tried to showcase the immediate need and plight of wild whales.
Where have you written about the plight of wild whales as if you had done that you would have already identified that the only ones classed as endangered are the Southern Residents and you would hav reported why people say they are endangered too?

The very whales that truly need our help. The 77 remaining orcas of the Southern Resident whales need our money, research, tweets, Facebook posts, and blog rants. They need our full attention.
What have you done about that? Your facebook, your blog rants, your tweets ALL focus on PETA, show me anywhere on your Stand with Seaworld page, your Awesome Ocean page, your Unofficial Seaworld Podcast page where YOU have asked people to take down the dams, improve the salmon runs, or encouraged Seaworld to breed orcas who are not hybrid and could be released back into the population, as happens with other reputable breeding programmes for endangered species.

Focusing on SeaWorld's 27 loved and cared for killer whales does nothing to help the plight of the Southern Resident Killer Whales.
There are 30 orcas in Seaworlds inventory, so who are you missing out?

What does and will help is visiting SeaWorld.  How does that help?

SeaWorld announced as part of it's Blue World project that they would be donating $10,000,000 to help the Southern Resident Killer Whales, an unprecedented investment in this population of animals. So while activists defame SeaWorld, they are hurting the very organization that is doing and investing the most to save the animals they claim to love.
This is yet again misleading. Do you think NO ONE is helping the Southern Residents other than Seaworld?? Saying they are donating $10,000,000 and having done it are 2 different things, they have given NOTHING yet.

In the meantime
The Centre for Whale Research is out with them AND don't hide the fact that the federal government funds the research into the Southern Residents. Remember Ken Balcomb  the man who has been studying and working with the Southern Residents for 37 years. The man YOU called a radical activist as he was interviewed for Blackfish as his knowledge is well valued by everyone apart from you?

Ken Balcomb who since 2007, the Center for Whale Research has been under contract with the National Marine Fisheries Service (NMFS) to conduct the Orca Survey project, as well as monitor the Southern Resident Killer Whales. NMFS uses this information to make informed management decisions, as well as to support other research. As government funding continues to shrink, we depend more and more on the public for support.

Or maybe WDC who offered a reward for the dolphin shooting on Seaworld's doorstep whilst they did what - OH YES NOTHING!

Have you added your voice to this as I sent it to you.  http://uk.whales.org/dams

There are many people out there campaigning and doing positive things for the Southern Residents already, but you no doubt won't have bothered with them as you see them as the enemy, or are to busy calling them names or focusing on PETA hoping that will take peoples attention off what Seaworld have done to orcas over the years in those tanks, as that is the REAL reason people protest.

As for this last statement my personal comment to that would be GET STUFFED. Had you not been so focused on your own agenda, making stupid little meme's to attack PETA hoping people wouldn't see what was going on  and spent less time slating people for doing fantastic jobs out there with the wild orcas, you would have known already that people CAN and DO fight for the Southern Residents whilst STILL protesting Seaworld.