My take on the recent Seaworld videos.


Bit of double standards here, JJ was a week old stayed captive for 18 months yet was released, nothing to worry about in the ocean there! Those prize orca are a different story though if it was safe for JJ its safe for them!
WDC explain a lot better than me, read here


Where are they going to get a video of Sam Berg doing what Holly Byrd did in this clip. This wasn't to take anything away from Holly it was showing the procedure that all the orca trainers had to do. Anyone with half a brain would realise that. When you watch an action movie on say Vietnam the people in the film aren't really getting shot, but to find original footage of them being shot would be very difficult indeed, most people know it is only giving you an example, unless of course you are working your backside off to try to discredit it.


This is not the best choice of orca to try to discredit a film either. As you say, Takara was grown when she was moved, on the Blackfish movie it shows a grown orca in the sling. What you fail to say is at the time of the move in 2009 Takara had 2 calves, Kohana and her younger brother Trua. Trua was left behind, he would have stayed with Takara for life and Kohana went with her as you say. You didn't finish off the story though, Kohana was one of the orca sent to Loro Parque, so she was separated from Takara, meaning she had had both calves taken from her. This is the statement from John Hargrove regarding his injured face Wendy was supposed to be his friend but lied for Seaworld here.  So the statement you made saying I want to be a good role model why would I work for a company that does that is very relevant. Why would you work for a company that does that???


If you check through Hubbs/ Seaworld documents you have only ever released 2 studies. Growth in captive orca in 2000. I dare say people would be able to see how they grow in the wild and one about killer whale reproduction in 1995. That is hardly valuable research to help the wild orca, that is research to help captive breeding.


This statement is also made to be misleading. On an article attacking a Jeff Ventre statement you wrote
THE WHALES ALWAYS RECEIVE THEIR FULL DIETS, THEY ARE NEVER

CUT AS HE SUGGESTS. THE FOOD IS MOVED SO THAT BEHAVIOR PRINCIPLES RELATED
TO MAGNITUDE OF REINFORCEMENT ARE UTILIZED TO HELP CONDITION TOP
BEHAVIOR CRITERIA. THESE PRACTICES ARE NORMAL PARTS OF BEHAVIOR
MODIFICATION TECHNIQUES USED WITH OPERANT CONDITIONING, THE SCIENTIFIC
APPROACH TO UNDERSTANDING AND MODIFYING BEHAVIOR TO ENHANCE RESULTS.
EVERY EXPERIENCED TRAINER WITH DEVELOPED BEHAVIORAL KNOWLEDGE
USES THESE PRACTICES TO ENHANCE THE INTERACTIONS WITH THE ANIMALS
SO THAT FOOD IS ALWAYS PRESENT BUT THE AMOUNTS CAN VARY TO MAXIMIZE.
IF IT’S ALWAYS FED THE SAME WAY AND AMOUNT IT COULD BECOME BORING
TO THE ANIMALS AND THUS LOSE THE VALUE OF ITS REINFORCING QUALITIES.
DURING THESE VIP SHOWS THE WHALES ARE HELD AT HALF BASE LEADING UP TO
THE SHOW AND THEN MAGNITUDED THE REST OF THEIR FULL DIETS FOR THE SHOW.

How is keeping them on half base leading up to a show, and stating food is always present but the amount can vary to maximise performance, be interpretted as anything else that food is with held?????

Interesting choice of trainer too seeing as you said that Keto killed Alix Martinez because the trainer
supervising Brian Rokeach didn't give him his 'reward' and gave neutral responses which then frustrated
Keto resulting in the attack and death of Alix. Why would they get frustrated if food wasn't part of the
reinforcement techniques???


After discovering that Mark Simmons company Ocean Embassy are actually dolphin brokers working with the Solomon Islands, all credibility of anything he has to say anymore goes right out of the window. He would have to support captivity otherwise he would be damaging his own company.


This video goes right back to the dinosaur issues. Did people need to see them to appreciate them? No they didn't. Everything they learnt about them was from books, TV, archeology, yet people love them. In relation to the orca, WDC is English, and is a great campaigner for orca freedom. People across the globe other than in the USA, France and Japan which are the only countries holding captive orca, fight for their freedom. Why would they do that, they can't see them in a tank yet they know about them, take boat trips to see them, read, watch TV and research them. So that in itself blows this clip right out of the water, people do not need to see them in a tank.

Again not the best of examples, Katina and 2 of her babies, one who cannot go anywhere are she is a full inbred, mother and son.

Katina, who is a wild caught orca, had Kalina first, Kalina was taken to do a tour of the Seaworld parks and not returned until she was 9 years old. Whilst away she had a calf of her own at the extremely young age of 7, 18 months gestation so she was 5 and a half years old and Seaworld allowed her to become pregnant. When Keet was 18 months old his mum was moved again as she was pregnant again. SEAWORLD SAID KEET BECAME DEPRESSED after her move but he was cared for by Haida 2 and made friends with Kuyquot and Katerina, despite that at aged 5 he was moved to away from them too.

She then had Keto - SEAWORLD SAID HE WAS MOVED OUT OF ORLANDO TO CORRECT HIS BAD HABITS he was 3. He stayed at San Diego for 9 months, then was moved to Ohio and then to San Antonio. He finally formed a bond with Kayla even fighting with Ky over her and was then reunited with his brother and they too became really close. Despite the bonds he made as he would have naturally been at his mothers side all his life, he was then sent to Loro Parque never seeing any of them again. People wonder then why he killed poor Alix Martinez, Seaworld knew he was messed up as they tried to correct his bad habits, who gave him those bad habits? Even though they knew about Keto they still let the trainers in Loro Parque swim with them, being supervised by Brian Rokeach didn't stop the death.

As you know the orca so well what possible reason was there to take Tuar from Kalina? He too would still be at his mothers side?

Then there is Skyla how old was she when Seaworld took her from her mother? 2, what was the reason for that??

When Kalina died from septicemia, she had none of her calves with her, why was that as Seaworld state they don't separate them??? Those 4 orca would have stayed in Katina's matriline after Kalinas death, so thats one calf.
Katerina - Katina's second calf was taken aged 2, and sent to San Antonio, she died there aged 10. Why did they take her from Katina as Seaworld's lovely videos say they respect the mother and calf bond, and the simpering mother of 4 says 'we wouldn't do that' but they would and have.
Taku was so messed up he mated with his own mother, producing Nalani a full inbred who can go nowhere as she will never be part of the breeding programme, if she ever is there certainly would be uproar as no respectable institution would breed an animal knowing they were full inbred. As you know them so well, how was that allowed to happen?? He died at San Antonio of pneumonia aged 14.
Unna - where is Unna and how old was she when she was moved?? She has been on birth control since miscarrying her first calf. Why isn't she still with Katina??
Ikaika was only 4 when he was traded for 4 Belugas and sent to Marineland. After winning the court battle he was brought back to Seaworld, so why wasn't he brought back to the same tank as his mother as he would have been with her for life in the wild??
Nalani - beautiful Nalani can't go anywhere as she can never be used for the breeding programme due to being the result of mother and son mating.
7 calves later she had Makaio, who is still with her. She should have all her calves with her and as 3 of them have died from septicemia, pneumonia and infection which then raises the question of how have these orca got those infections as Seaworld says their tanks are free from bacteria, infection and pathogens. Look through the causes of death for the other orca too, this is obviously NOT the case.

To produce a video saying Seaworld are aware of the mother and calf bonds makes the situation so much worse, as ignorance could have been an excuse, now there is no excuse for separating these orca.


Same response as above, firstly Mark Simmons input since being revealed as a dolphin broker is of no importance. But just to cure the twist of words they use to try to deny they take calves from their mothers. My daughter is 17, when she was a baby she was obviously my baby, even though she is now 17 she is still my baby. When she gets married and lives elsewhere, she will still be my baby. Seaworld stop using the word calf to twist up your argument. It makes no difference how old the offspring was when you separated them,  they would still be with their mothers if they were wild. You know it and so do we!


The list of Seaworld drivel just gets longer and longer, it is almost like they deliberately insult peoples intelligence with them, using orcas and people who are so easily researched.  Sometimes it is almost embarrassing to see Seaworld supporters taking in every bit of it, without questioning one thing.

What the supporters seem to miss is if Blackfish hadn't been made people would still be protesting Seaworld because of the horrible things these orca have gone through, and they seem to miss the fact that every video released lately by Seaworld is to challenge Blackfish, making them believe that people are only having something to say because of the movie.  Take note Seaworld supporters they have NEVER released a video stating why Taima was pregnant at 5, why Kalina was pregnant at 7, why Kalina was taken from her mum and taken on a tour around Seaworld parks. Why have 44 orcas died in their tanks? Why have there been over 100 incidents of orca, trainer aggression?  Why are there incidents of orca on orca agression? Why wasn't Kandu V separated from Corky as they had a history of incidents before the one when Kandu died?

There are lots of incidents to answer too but hey lets keep the focus on Blackfish and people won't ask about them. Wake up supporters and look past the movie you like to quote so much. 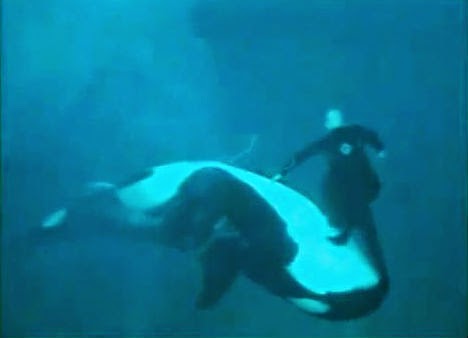