Research at SeaWorld Benefits Killer Whales in the Wild - which bit?? 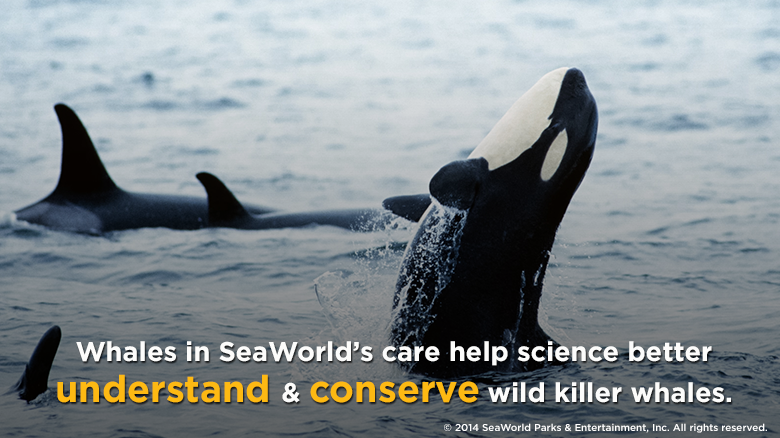 Research at SeaWorld Benefits Killer Whales in the Wild  - which bit??
The killer whale research we conduct has direct benefit for science. The animals in our care allow researchers, biologists and conservationists to better understand and conserve these remarkable animals in the wild. SeaWorld conducts and publishes the results of research on and about killer whales, provides access to our parks and animals in controlled environments, and supports field research projects around the world.
As the orca are not behaving naturally, the research allows scientists to research captive orca only.

This research contributes to conservation of wild whales.

As you can see from the list below, when you put the research into date order it forms a pattern where research hasn't been done for any other reason than for Seaworld itself. i.e. Studies for American captures, studies for Icelandic captures, research into illness's after their orca have died, eg, west nile virus, bacterial infection, reproduction research, leading to AI, sperm freezing and lastly, Sumars death. Apart from the Chinook Salmon research for the Southern residents all the other papers explain what has happened in your own tanks or have been needed for another phase in Seaworld history.

While all killer whales around the world are not classified as endangered, the distinct population segment of Southern Resident killer whales off the U.S. and Canadian Pacific Coast are listed as endangered by the National Marine Fisheries Service and also protected by Environment Canada under the Canadian Species at Risk Act. The research we conduct and support at SeaWorld is made available to the scientific community and may someday help researchers understand why this population of whales is in decline and perhaps help to reverse the trend.
Scientists and wild whale biologists have already established why the Southern Resident killer whales had declined. As you wanted to capture fish eating orca for your tanks you targeted the Southern Residents. During 15 years of capturing in Washington and British Columbia. Many of those were caught by YOUR whale catchers, you took out a whole breeding generation for your tanks and many many died.

55 were transferred to aquariums

12 or 13 died during capture operations

Our parks = unique environments for researchers to understand killer whales.
We manage the largest collection of killer whales in a zoological setting; house them in state-of-the-art habitats; and provide researchers the unique advantage of animals that are trained and able to cooperate. Researchers can monitor these individuals daily over long periods of time. In short, we create a controlled setting for science that is impossible to replicate in the wild.
For those trying to research whales in the wild, how does Seaworld think that trained killer whales benefit the wild community. The researchers could watch them for days as you say, but will never see them hunt, use echo location properly, see the matraline bonds, see the relationships between males and their mothers as no adult male is with his mother at Seaworld. All they could research is conditions of a captive whale.
The Research
Scientific research performed at SeaWorld is carried out by our own research staff, and by scientists from national and internationally renowned universities and research organizations such as UCLA, the San Diego Zoo and the Hubbs-SeaWorld Research Institute.
We publish the results of our research in peer-reviewed journals, making it available to scientists, those who manage animal populations, and other interested people around the world.  SeaWorld scientists have authored or co-authored hundreds of published papers.  Of these, more than 30 contain information specific to killer whales.
We also provide resources and financial support to field researchers.  This support is offered directly by SeaWorld, through grants from the SeaWorld & Busch Gardens® Conservation Fund, and by research foundations associated with and supported by SeaWorld, including the Hubbs-SeaWorld Research Institute.

The publications below are from Seaworld pages where they state their research benefits those orca in the wild.  As you work through the publications it looks more like a history of Seaworld with the research being done purely to benefit themselves at the stage they are in the acquisition of orcas. Take note of the dates of publication.


Below are some of the research studies authored by SeaWorld. These published studies on killer whales showcase SeaWorld's larger commitment to animal welfare and conservation. Our parks provide a unique opportunity for SeaWorld and affiliated scientists and researchers to examine killer whales up close to better understand these animals. These studies complement and strengthen research efforts in the field.


Goldsberry, D. G., E. D. Asper, and L. H. Cornell:  Live capture technique for the killer whale (Orcinus orca).   Aquatic Mammals. 1978;6(3):91-95.
Of 24 animals studied, 9 died before the age of 5 and the 15 remaining lived between 1.25 and 13 years giving a mean of 5.37 years. Causes of death from 41 records show the majority died from infection. 25% from pneumonia, systemic mycosis 22%, other bacterial infections 15.6%, mediastinal absess 9.4%, other conditions and one undiagnosed make up the other 28%. Mycotic infections are uncommon in OPEN AIR NATURAL SEA WATER SYSTEMS and killer whales kept in these conditions are considered LESS AT RISK.


Jehl J.R., Evans, W.E., Awbrey, F.T., and W.S. Drieschman:  Distribution and geographic Variation in the Killer Whale (Orcinus orca) populations of the Antarctic and adjacent waters.    Antarctic Journal. U.S.  1980; 15: 161-163.
Population studies which had to be done prior to capture


Cornell, L. H:  Hematology and clinical chemistry values in the killer whale, Orcinus orca.   L. Journal of Wildlife Diseases. 1983;19(3):259-264.
You knew these orca were different before you started breeding the hybrid mixes.  Lactic dehydrogenase activity was lower in all animals of Pacific origin, as compared to animals from the Atlantic, regardless of age or sex. These "normal" differences emphasize the importance of establishing an animal's individual hematologic and blood chemistry profile by routine sampling.


Lyrholm T., Leatherwood S., and J. Sigurjónsson:   Photoidentification of Killer Whales (Orcinus orca) off Iceland, October 1985.  Cetology.  1987;52:1-14.
Identification of Icelandic Orca
Duffield, D. A:   Orcinus orca:  taxonomy, evolution, cytogenetics and population structure.  Behavioral Biology of  Killer Whales. 1986;19-33.
You were made aware of the structure of killer whale populations and had all the information you needed yet chose to ignore as your shows were more important than the whales themselves which were replaceable


Benirschke, K., and L. H. Cornell:  The placenta of the killer whale, Orcinus orca.  Marine Mammal Science. 1987; 3(1):82-86.
I would think although my own view researching a wild whale placenta would be very difficult and this article is by Larry Cornell who you sacked in 1987


Griner, L. A:   Cardiac candidiasis in a captive killer whale.  Verh. ber. Erkrg. Zootiere. 1992;34:159-161.
Hall, et. al.:  Increasing Flexibility in Photographic Techniques for Identifying Killer Whales.  1987.  Cetology 53. This report shows that this is so common in captive killers whales it has to be aggressively treated

According to your website this isn't actually finished
Kastelein, R.A., S. Walton, D. Odell, S.H. Hieuwstraten, and P.R. Wiepkema:   Food consumption of a captive female killer whale (Orcinus orca).  Aquatic Mammals. 2000; 26(2):127-131
''Follow-up research with SeaWorld’s killer whales will look at metabolism in two ways. First, we will repeat this study with additional whales to add data on resting metabolism.  Next, we will look at how changes in activity patterns change food demands.   This will allow scientists to understand how foraging for food might increase the caloric needs of wild whales.''

Robeck T. R., and H. Nollens:  Hematological and Serum Biochemical Analytes Reflect Physiological Challenges during Gestation and Lactation in Killer Whales (Orcinus orca)   Zoo Biology. 2013;in press.
The last 12 months of gestation had greater physiological impact than lactation, but changes associated with and immediately following parturition were the most dramatic. During this period, killer whales may experience increased susceptibility to illness, and anthropogenic and environmental disturbances.  Even though the report states the above, females are not taken out during their pregnancies to avoid disturbances and even participate in shows.

Begeman, St. Leger, Blyde, et.al:  Intestinal Volvulus in Cetaceans.   Veterinary Pathology.   2013;50:590.
9 captive and 9 wild orca have died from this. Sumar being one of them, hence the investigtion


Upon reading all these publications, the things I find most disturbing are - back in 1995, your OWN research stated that the bacterial infections killing your animals were less at risk in open air Sea Water facilities, yet despite your parks being near or on the ocean, you chose to ignore it.

In 1983 you researched DNA and realised the different groups had different DNA sequences, which proved that the individual groups did not cross breed in the wild, yet you did it anyway. Why would you ignore something like that and create hybrid orca, who now have no group in the wild, so would always have to be captive??

Your gestation and lactation research shows that pregnant and nursing mothers need rest, quiet, yet you had them performing in shows whilst pregnant and whilst nursing. When you have research showing you the effect why would you carry on doing that??

There isn't much point in having research which you pick and choose at, research is research and yet you have ignored the parts that don't suit you, same as you ignore the parts from other researchers who don't suit your wish to keep these orca's in a tank performing tricks until they die.

No one wants to see Seaworld close, what the 'radical activists' want to see is you giving the lives you stole back to those orca. You know you would be perfectly capable of teaching them to catch their own food, and you know a sea pen facility could still be managed by the trainers they orca know and people will learn so much more from seeing wild behaviours than made up ones. If you go on a whale watching trip you can never guarantee seeing any orca, but in a sea pen setting you would be guaranteed seeing the orca, and seeing the orca you know too, how could people not want to see that?