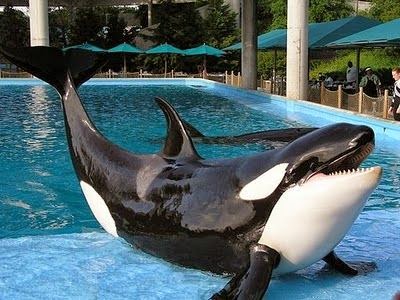 Whilst looking for a Bridgette Pirtle interview for another article,  I came across this one, which paints a horrible picture of the way Unna was treated at Seaworld. Even though she had miscarried on the slide out, the trainers had seen it, yet the show continued, with the trainers having to dive in after the show to pick up the pieces of calf fetus!! There is no excuse for treating an orca like that.

Unna was one of the orcas who was taken from her mother Katina.  Although Seaworld deny separating any of them, the evidence is there as both are still alive in different tanks.

Unna was born on December 27, 1996 at SeaWorld Orlando. Her parents are Katina (mother) and Tilikum. She is Katina's fourth calf and also Tilikum's, and was the second calf to be born to the pair. Unna lived with her mother, father, siblings, and other whales at her birthplace in Orlando for the first six years of her life.
In August 2002, Katina gave birth to her fifth calf, a male named Ikaika. Unna was there to assist her mother during the labor.

In December 2002, Unna was transferred to SeaWorld San Antonio because the park only had three whales at the time: two males who were fighting over one female. Kayla, Keto and Kyuquot. She was half sister to Kyuquot and Aunt to Keto.

In late April 2006, Unna gave birth to a stillborn calf, unless she was Ai'd that would have been another inbred calf.  Her animal profile states  Her health was compromised after this event and she has been on medication since.

Were there 2 other pregnancies as Pirtle says or was the one that came out during the show the pregnancy referred to?

She is only allowed to work with the most experienced trainers after showing discrimination between trainers and aggression towards other whales especially to the older males in the group. Separation can be a challenge for Unna, especially after the med pool for injections, endoscope etc. She needs to be reinforced effectively to gain her trust.

John Hargrove also witnessed some frightful behaviour with Unna. Unna used to destroy her face picking at the paint in the show pool. The trainers lobbied Seaworld for years to have the floor repainted but it never was. It made the shows difficult for them and it obviously wasn't good for Unna, but again Seaworld did nothing!! 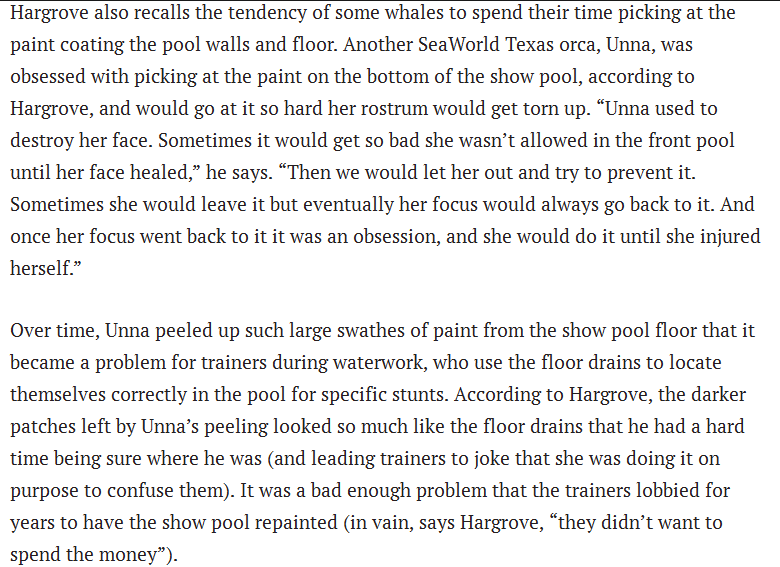 The stereotypical behaviour was not just limited to Unna.  Hargrove in particular remembers Sakari, a young calf at SeaWorld Texas. “She would go down and hit her head on the bottom of the pool, over and over to the point where her jaw would be bloody and bruised,” Hargrove says. Once, according to Hargrove, the damage was so bad that Sakari stopped eating for a few days because it was painful for her to open her jaw. “Once they got to the point where the jaw was bloody and badly bruised you would think they would stop,” Hargrove notes. “But they wouldn’t stop.”

We all know the outcome of Keto's behaviour when he was moved on to Loro Parque.

As for Kyuquot he expressed his frustration in the only way he could.

Will Seaworld answer to this? - Probably not

Should Seaworld answer to this? - they definately should as these were Seaworld staff describing incidents whilst they worked at Seaworld.

Claims like these cannot go without some explaination as to why the trainers were ignored when reporting the pool bottom.  Why the other 2 pregnancies are not recorded anywhere at all yet Bridgette Pirtle said they did happen? Lastly why would a show continue when an orca has just miscarried a calf??

Shame on you Seaworld.