Awesome Ocean - lies about captures and the death of J32 again

Starving and Pregnant: A Look Into J32’s Tragic Death Photo Credit: Gord Kurbis/CTV News
Earlier this month we shared the tragic news about a young killer whale found stranded and dead in the Pacific Northwest.
That article was debunked here as being disgraceful as it used this poor whales death to try to increase Seaworld's gates
We've been waiting for test results to determine exactly why this killer whale died, and now that the necropsy is complete, we can assure you the results are heartbreaking.

The necropsy report can be seen here on the Fisheries and Oceans Canada website, it doesn't say anything about starving at all. She died of infection

Here's what we know:
J32, aka Rhapsody, Was Starving To Death
When biologists and scientists performed the necropsy, they discovered that the female orca had a thin layer of blubber that was also oil free. This means that she was experiencing a prolonged period of malnutrition. She and her unborn calf were starving.
The necropsy results say nothing about starving, the preliminary necropsy report also stated

'' With reference to the necropsy, the gross observation that J32’s blubber layer was relatively thin and dry of oil is consistent with inadequate diet for an extended period, and there was very little fecal material in the intestines. Dr. Stephen Raverty said that there was blockage of the colon, but I did not observe that evidence because the colon was taken along with the uterus, vagina, ovaries, and anus in a complete “package” for analysis in Vancouver.''

Yet again you selected the bit of the report that suited your explaination, completely missing of the part that she also had a blocked colon which would have contributed to her lack of blubber

Killer Whale Calfs Are Dying In The Wild
Adding to the tragedy of this whales untimely death is the fact that she was pregnant. As you can see in the necropsy report the calf caused her death
''the cause of death was a result of in utero fetal loss with secondary bacterial involvement (endometritis), and eventually maternal septicemia; meaning the fetus caused an infection that became systemic, and ultimately fatal to J32''
.In the past three years, the Southern Resident Killer Whale population has not seen a killer whale calf survive. Right now, there is a 100% mortality rate for killer whale calfs in the Pacific Northwest.
100% mortality sounds huge but there have only been 2 births since 2005, the calf who died L120,and Sooke L120 was the third calf for Surprise! (L86), but was not seen with Mom in recent sightings by the Center for Whale Research, the organization that maintains the annual census of the Southern Residents.  Surprise’s second calf, Sooke (L112), died in February 2012 at 3 years old, and a necropsy revealed signs of severe acoustic trauma and now J32's unborn calf.


Killer Whale Prey Is Toxic And Disappearing
The main source of food for the Southern Resident Killer Whales is salmon. Over the past few decades, numerous environmental issues have depleted salmon stocks past the point of sustainability.
Read the scientific paper about killer whale food stock here.
This is true hence you being sent the petitions to remove the dams blocking the salmon runs, which you failed to do anything with, despite it being sent to you personally over and over again to post onto your various websites and facebook pages. Yet you chose to do nothing.

Researchers have found that the salmon that killer whales are feeding on is toxic and contain dangerous chemicals that have turned this entire pod of orcas into what scientists are considering the world's "most toxic animals."
Read the NOAA report here
The report doesn't say salmon is toxic at all. The report in 2008 which you list states 4 main concerns
1. Reduced quantity and quality of prey (Chinook/King/Spring salmon) (dams etc)

2. High environmental levels of persistent biochemicals, such as PCB’s and flame retardants, that have known harmful effects on marine mammals (eg. immune system repression and reproductive system dysfunction)( they live in the highest populated area of all killer whales.)

3. Sound and disturbance from vessel traffic and shipping.NOAA has observed the whale watching boats and it isn't those where the disturbance comes from it is things like this, the Southern residents territory is in a high shipping area. 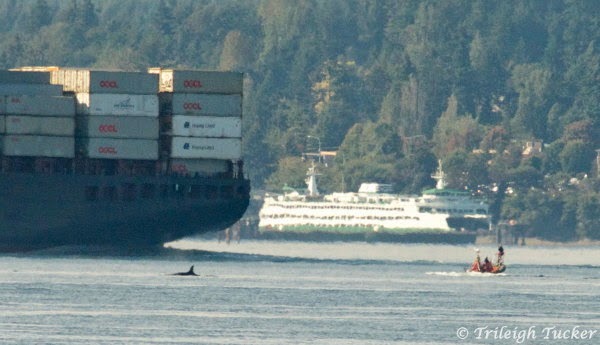 
If this issue isn't resolved, these whales will disappear. The only place people will be able to see killer whales on the West Coast will be at SeaWorld San Diego.

That again isn't true, the Northern residents are not endangered nor are the transients or other whales swimming in overlapping territory

SeaWorld Is Not The Problem With The Southern Resident Killer Whales The graph above paints a picture of the population for the Southern Resident Killer Whales. Please click Awesone Ocean's link to read what it says about the graph

SeaWorld stopped collecting killer whales from the Southern Resident pods in 1966; other marine parks continued to collect killer whales in the Pacific Northwest until 1973 when the population bottomed out at 66 members.
This is the biggest lie on the pageSeaworld DID NOT stop capturing the Southern Residents in 1966 at all.
In 1976, Washington State sued SeaWorld for violating its permits during the violent captures, and the court ruled in favor of outraged citizens and Dr. Newby, who testified against the capturing of orcas in Puget Sound. SeaWorld was included by name in the court’s decision prohibiting orcas from being forcibly removed from their rightful ocean home.

As you can see from the video evidence, from the former Secretary of State Seaworld were still capturing in 1976. After being banned from US waters, they tried to move onto Alaskan waters and when that was stopped without taking a breath they moved on to Iceland.

Using the graph posted by Awesome Ocean, you can see the dip around the time they were capturing, and the population never recovered as they took calves who would have reached breeding age in their late teens, taking out a whole breeding population.

Over time, the Southern Residents bounced back to a peak population of 98 members in 1995. Since the peak in 1995, the population has been in decline ... and it has NOTHING to do with SeaWorld.

It has everything to do with Seaworld as you can see above. When you lie about the dates you can make it look like it has nothing to do with them, but when Courts are involved the timeline is plain to see and be researched.

After examining this tragic death, the persecution of SeaWorld and other zoological organizations by animal activists is reckless and irresponsible.
Not when the people who support you can see that this is a downright lie you are trying to tell them, to further Seaworld's agenda. It is a plain insult to those people who can see for themselves what happened at what time.

SeaWorld is the only zoological organization in the world that has the expertise, resources and facilities to address the complex issues facing the declining population of Southern Resident Killer Whales.
Fact: There are only around 12 female Southern Resident Killer Whales left that are capable of having calves. When the Southern Residents were surveyed in 2004  Not a single animal was encountered that was estimated to be born between the years 1967 and 1970.
43% of reproductive females were taken from the population during those captures, which does not include the possible calves from those females too.

Fact: No killer whale at SeaWorld has ever died of starvation. No killer whale at Seaworld has ever died of old age either
Fact: In the past 3 years, there have been no successful killer whale births among Southern Resident Killer Whales. In the past 4 years, SeaWorld has seen the successful births of 5 killer whales. But none of those have any relevance as Seaworld breed hybrid orcas in their tanks with no conservation value what so ever.
Fact: In 2014, SeaWorld funded a project to study and assess the Southern Resident Killer Whale population's food sources and identify potential long term solutions.
It says this project is $24,964. Seaworld said they were giving $10 million to the Southern residents. What are the results of this study, is it done yet, has it started yet and where is the rest of the money Seaworld promised?

If you are an animal activist, and you truly care about the welfare and wellbeing of animals, put down your signs, stop the angry tweets, and join SeaWorld and other great nonprofits as they work to save this endangered population of orcas in the Pacific Northwest.

Make a list with evidence of what exactly Seaworld has done for the Southern Residents!!

The same response applies to the last time you used a Southern Resident's death to try to manipulate people to support Seaworld.
As for this last statement my personal comment to that would be GET STUFFED. Had you not been so focused on your own agenda, making stupid little meme's to attack PETA hoping people wouldn't see what was going on  and spent less time slating people for doing fantastic jobs out there with the wild orcas, you would have known already that people CAN and DO fight for the Southern Residents whilst STILL protesting Seaworld.