Whilst looking through Seaworld's listed research publications I came across some more unrevealed information, in the very first one listed
Asper, E. D. and Cornell, L.H.: Live capture statistics for the killer whale (Orcinus orca) 1961-1976 in California, Washington and British Columbia. Aquatic Mammals. 1977;5(1):21-26.

As you see from the document, this isn't actually research, this is people including Don Goldsberry and Jon Holer trying to contradict research by Bigg and Wolman, curiously they increased the figures in their documents from 263 captured to 303. What was the point of that??

A total of 303 whales were actually captured from November 1961 to March 1976.
A total of 237 were released
56 were kept for research and/or public display
and 10 killer whales died during the capture operations.

Individual members or entire pods of killer whales have been encircled by certain collectors more than once. The first collection from one pod yielded 2 individual animals in 1968, 2 additional animals in 1971 and the pod was spotted again in 1976 with 4 additional young. The pods total number had increased from 15 in 1968 to 19 in 1976.
I find this a strange observation, if there were 15 animals in 1968 and 4 were taken, surely that leaves 11, if they then had 4 more calves that would put the total back to 15 not 19 as stated. This is hardly fantastic research. 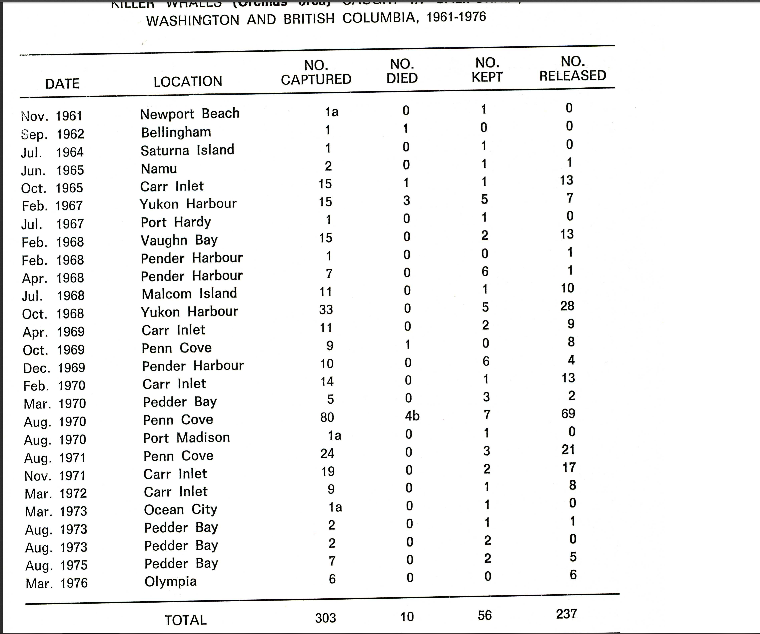 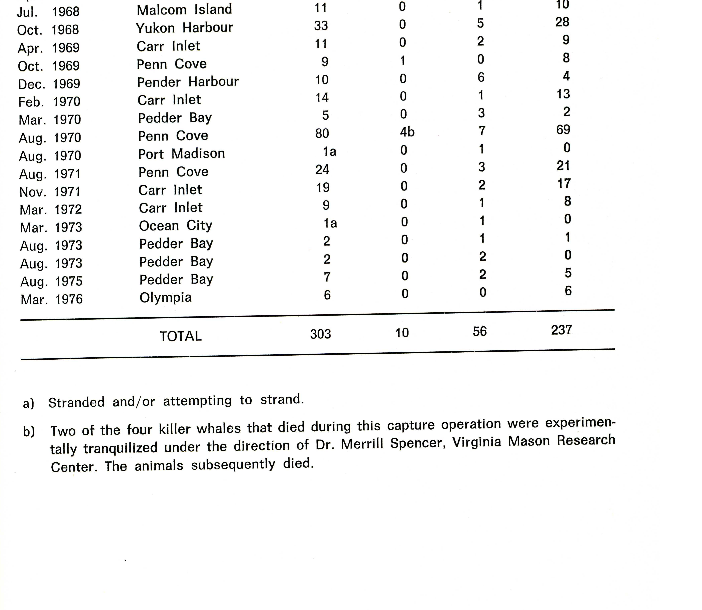 We are all aware of the horror of the captures but many are unaware that 5 of those killer whales were forced to strand and then taken captive. see point a

This document that Seaworld have put in there research documents tells a completely different story of those 4 dead whales.

point b on the above table states
Two of the 4 killer whales that died during this capture operation were experimentally tranquilized under the direction of Dr Merrill Spencer, Virginia Mason Research Center. The animals subsequently died!

Were the animals sunk to hide the dead bodies, or were they sunk as they had been experimentally drugged causing their death?
This seems to have been well hidden and not mentioned in any of the Penn Cove capture information, I have never seen it in any other document other than this one done by Seaworld.

Seaworld also strangely question Mitchells research on the size and sex of the captures, detailing table 2.  The Southern Resident community of the Northeast Pacific lost 48 of its members to captivity. By 1976, only 80 killer whales were left in the community, which remains endangered.
With subsequent captures, the theme parks learned more about avoiding injury during capture and subsequent care of killer whales, and discovered that they could be trained to perform tricks, a great attraction to visitors. As commercial demand increased, growing numbers of Pacific orcas were captured, peaking in 1970

As we all know too only 2 orcas survive today from these captures, Lolita from the 1970 Penn Cove captures and Corky 2.

As Edward Asper was Curator of Mammals and Birds at Seaworld  and
Lanny Cornell was Vice President, Research, Veterinary Husbandry at Seaworld and they wrote the contradicting report, it also shows that Seaworld were indeed the main capturers, as lately they seem to dispute that fact saying orcas went to various marine parks. Indeed they did BUT only Seaworld were named in the court case banning them from captures in the area.

This is yet another thing Seaworld need to own.