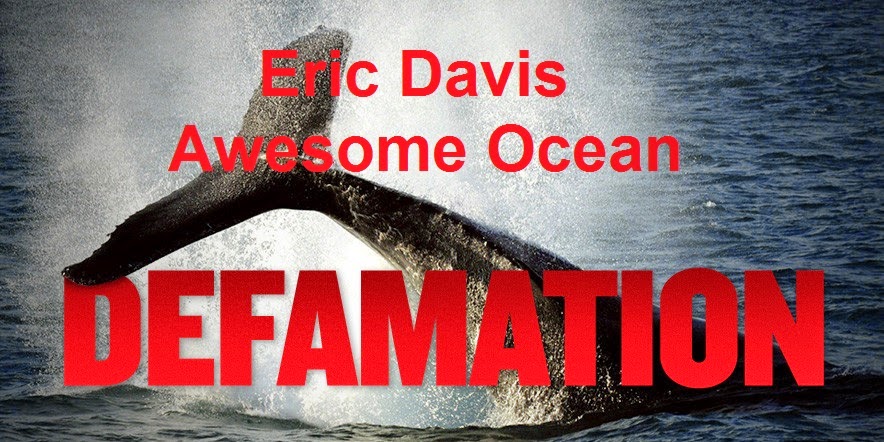 As many know Awesome Ocean have a well known reputation for twisting facts, calling people names and have a ridiculous obsession with PETA which they use to try to distract from actual events that have happened in Seaworld tanks.

As many know from my blog, I have added in official links into their articles and debunked their ranting over and over again. (see below and check the links to documents yourself)

There are many more articles calling people names, Ellen Ericksen, Ric O'Barry, Ken Balcomb, Naomi Rose etc, but they are so easily debunked and so full of lies and twists they didn't even deserve debunking.

The most recent victim of his twists being that of Elizabeth Batt, who has nothing to hide, provided documents which Eric said would be amended but obviously weren't, and yet he has the cheek to call her over her reporting. Anyone reading Elizabeth Batt's blog on the Marineland issue and Digital Journals backdown who incidently were the only company out of eight companies/individuals who have a SLAPP suit pending to back down to Holer, can see for themselves that once again Awesome Ocean has it wrong.
In the words of Awesome Ocean when describing their article


Eric Davis 'can kiss his dreams of being a respected journalist goodbye!
Because when activism mistakenly wears the robes of journalism, you can bet the truth will win in the end.'

It most certainly will and in my own words Liars Never Prosper, Eric is himself an activist in the true sense of the word for Seaworld and LIARS ALWAYS get caught as Eric Davis has below.

Yesterday 20th Jan 2015 a very truthful post was posted on Awesome Ocean's facebook page, which showed how their 'fans' are starting to feel about Eric's obsession with Peta. Luckily I took a screen shot of it. 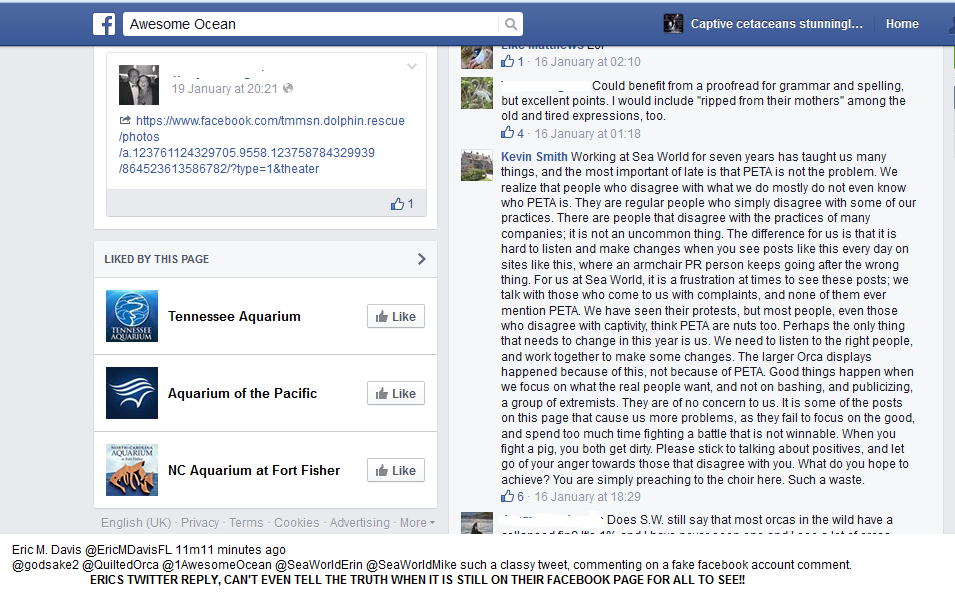 As you can see from the screen shot, it shows exactly what everyone has been trying to tell Eric Davis, none of the people complaining at Seaworld parks mention PETA, none of them, nor the activists associate what happens at PETA with what happens and has happened in Seaworld tanks. Many activists are not PETA supporters either but I guess it is easier for Eric to use them and their polices as a distraction rather than focus on and answer to the actual matters at hand - 45 orca deaths, 3 human deaths, why despite the rising floor Tilikum still would not let Dawn go, why Seaworld blamed Dawn in court yet say they didn't,  mother and offspring separation which is blatantly obvious as 4 of them live in Spain, if he addressed and answered those things and admitted the problems Seaworld created all by themselves, then he might be taken seriously, but that would mean having to do some proper research on official documents other than lying or distraction with PETA. Even his own fans are now speaking out.

During a twitter conversation yesterday between Eric and myself he proved just how easily those lies fall out of his mouth. Luckily I took screen shots of those too to provide as evidence. 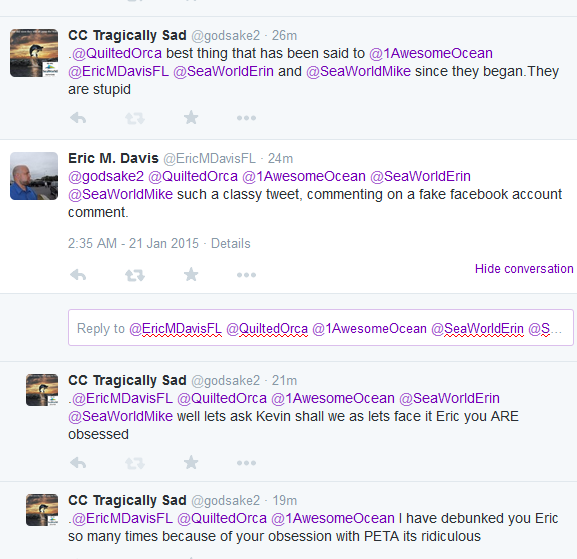 This thread of tweets shows how when Eric is confronted with facts he tries to twist away from them, moving from the FACT that the post was made onto the person who made it. Typical Awesome Ocean behaviour which is why their posts are so easily debunked.

Shocking that his first defence is to lie, doesn't leave much credibility does it? 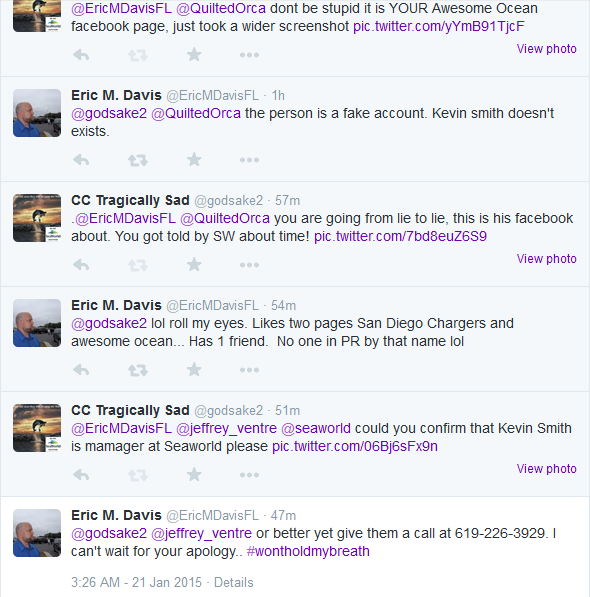 He chose to ignore the reply to his last comment but again, here was my reply. 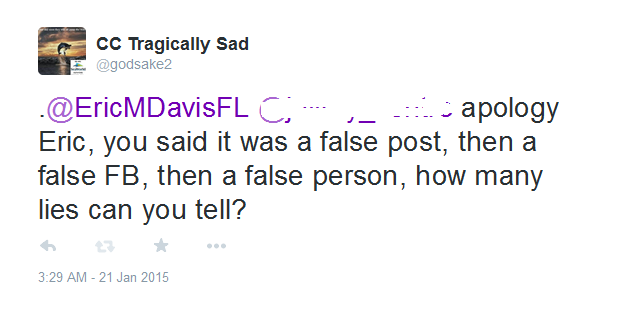 The about page on the Kevin Smith facebook profile states -

Whether this is an actual Seaworld manager really is irrelevant ,you can test the link above, it is an actual facebook profile and THAT person wrote the original comment on Awesome Oceans facebook page.

I then proceeded to message the owner of that account, emailed Seaworld, wrote on Seaworld San Diego and Seaworld Orlando's facebook pages and as yet have had no response from any. I am not however holding my breath as Seaworld religiously ignore posts and questions that do not earn them money. 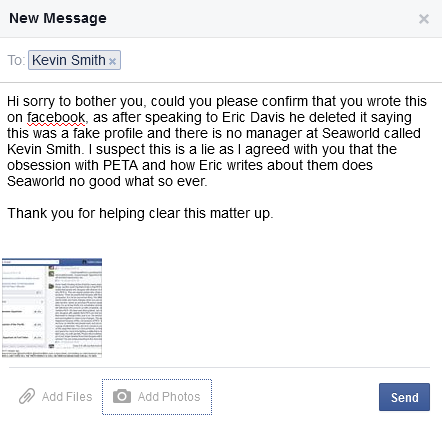 After posting this to Eric as I have nothing what so ever to hide, he then moved on to
LIE 3 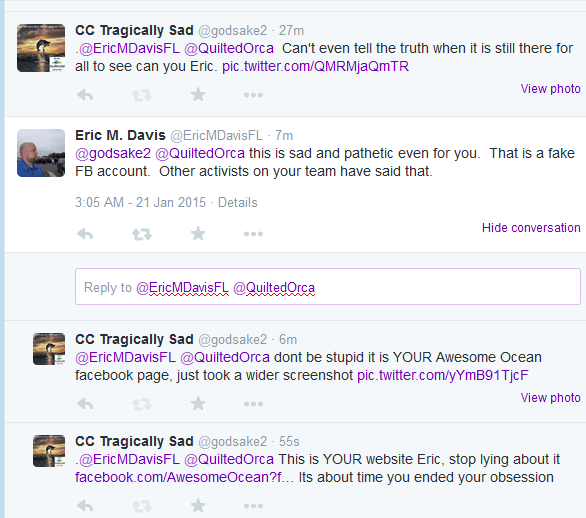 Other activists on my team??? Once again Eric misses the point that whoever Kevin Smith is, he wrote on Awesome Ocean's page telling them exactly what everyone thinks, note on the original it had also been liked by 6 other people.  The same has also been said on the Stand with Seaworld facebook page.  (see below) Yet Eric, Erin and Mike think they know best which leaves them wide open to be debunked and called out for lying over and over again.

Lie 3 how can it be a fake account when that person wrote the comment on THEIR facebook page. Doesn't matter what the person is called the FACT is they wrote it.

Finally even though Eric thinks he has nothing to hide he deletes the comment. The comments above and below can still be seen there now.

Why would it be deleted?  His explanation leads to 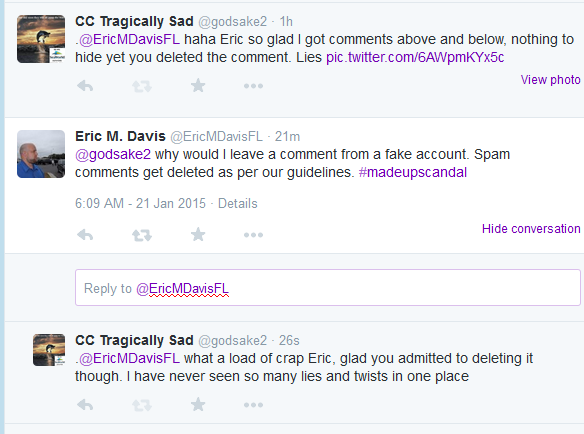 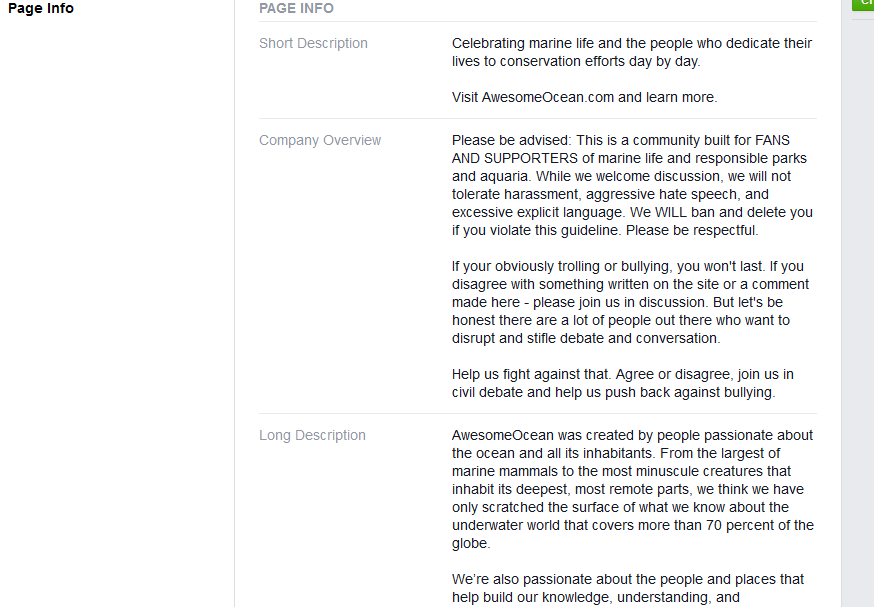 The guidelines say nothing about spam and as yet Eric doesn't know for sure that the account is fake as once again the FACTS elude him. Whoever wrote that post, wrote it from that account, the account is still there, the post was there so how is that spam?

The about page on Awesome Oceans facebook page also leads to

Finally whilst waiting for confirmation responses from Seaworld and the Kevin Smith account holder, a lovely Seaworld fan who just wants to find the truth from both sides, adds her input to the tweets 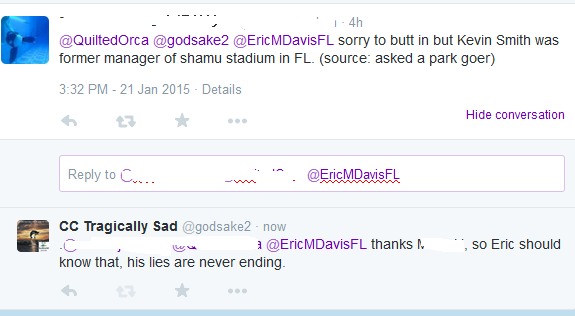 She then also provides a link to where she found that park going friend.
After asking the question the reply came straight back as you can see below. 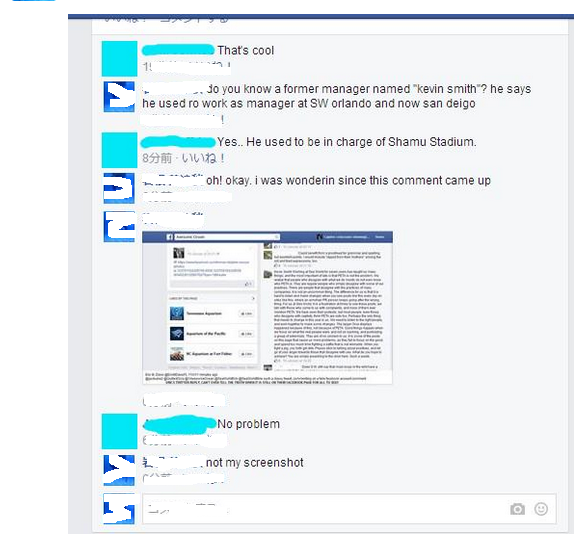 This Seaworld fan echo's what most of them are about she 'calls them as she sees them.' 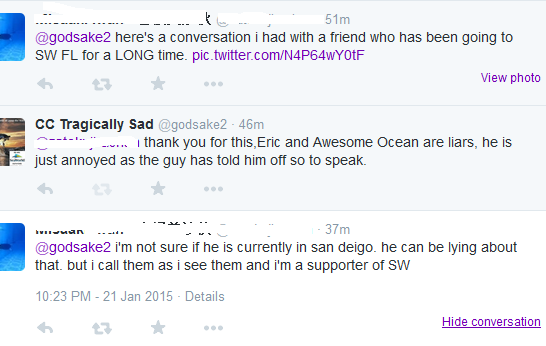 As you can see from the Stand with Seaworld comments below,  Eric knows his, Erin McKinney's and Mike Madsen's obsession with PETA is too much, and the new writer Danielle Cookish seems pretty much the same, you can see her drivel here 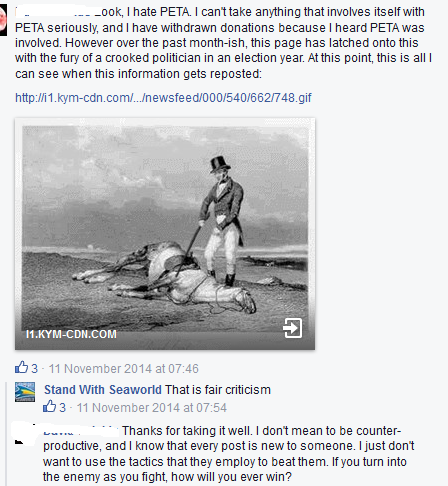 Eric Davis and Awesome Ocean can not be taken seriously in any shape or form, even their own fans are starting to see them for exactly what they are and to lie and try to twist out of a situation over such a length of time, when the bottom line is, the post WAS written on the Awesome Ocean page, no matter who wrote it, just shows where their mind set actually is, response needed  --  lie.

As you can see from the about section of Awesome Ocean all the sites we know of that spout the same rubbish about PETA, Blackfish and spread rubbish waiting to be debunked with facts, all come from the same source Eric Davis, the very person who just had lie after lie fall out of his mouth, trying to avoid the FACTs yet again. 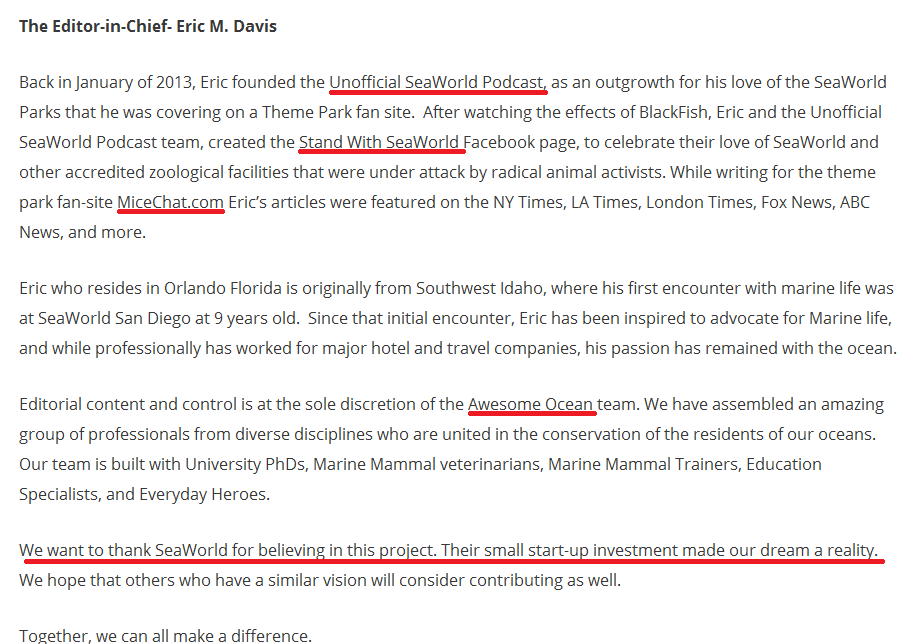 All the articles I have already debunked from Awesome Ocean just by adding the facts.

Decide for yourself Awesome Ocean or Factual Evidence

Awesome Ocean lies about the death of J32 and orca captures

Awesome Ocean Sick response to the death of J32 Rhapsody

Awesome Ocean 3 things you're not supposed to know

Awesome Ocean - yet another twisted tale about Philippines dolphins

Awesome Ocean misleads again - these are NOT facts...