Awesome Ocean Attempts to stop their fans finding the truth! Ever try having a conversation with the bathroom wall? In a truckstop bathroom with foul graffiti written on it?
Of course, but then you resort to blocking don't you?
We didn't think so.

Yet, PETA super-fans over at The Dodo are demanding SeaWorld do just that. Essentially demanding that SeaWorld respond to what consists of The Dodo's thoughts about the marine park.

Firstly, your research shows you up once again lol. Take a look here
Anyone and everyone who loves animals can make a post on the Dodo, even you Eric, so its not just the thought of one thing - the Dodo, it is the thoughts of many individuals, even Seaworld fans write on there too. Fancy that!!

You see, leading up to the Super Bowl, GoDaddy released an ad online. The ad, which is an obvious spoof of the hugely popular puppy ads from Budweiser, features a puppy named Buddy who is lost and returns home only to realize he’s been sold via a website set up using GoDaddy.
Twitter and Facebook erupted with negative reactions to the ad citing the promotion of puppy mills and improper breeding.
GoDaddy began engaging those who tweeted at them about the ad. They explained their longtime work with animal shelters, volunteer efforts by GoDaddy employees and even noted that a loving family had adopted Buddy. It was by-and-large a rational conversation.
Well isn't that how it should be?
If you have nothing to hide you defend yourself, well normal people do anyway, those who are honest enough to back up what they say. People like yourself, Stand with Seaworld, Podcast all run by ermmm you, Erin and Mike, block those who are armed with the facts, take a look down your own wall, there are many times people say they love learning facts, not just things you choose to tell them. Then there is Seaworld themselves who do exactly the same thing.
Got something to hide?

In steps PETA's official mouthpiece, a web publication called The Dodo.
Seeing controversy, they took a shot at SeaWorld.
Rightly so as Seaworld even when addressing things lie upon lie. What company would use an orca who had 7 calves and only has 2 of them with her as an example of NOT separating mothers from their offspring?


Katina -
First born Kalina was taken to do a tour of the Seaworld parks and not returned until she was 9 years old. Whilst away she had a calf of her own at the extremely young age of 7, 18 months gestation so she was 5 and a half years old and Seaworld allowed her to become pregnant. When Keet was 18 months old his mum was moved again as she was pregnant again. SEAWORLD SAID KEET BECAME DEPRESSED after her move but he was cared for by Haida 2 and made friends with Kuyquot and Katerina, despite that at aged 5 he was moved to away from them too.

She then had Keto - SEAWORLD SAID HE WAS MOVED OUT OF ORLANDO TO CORRECT HIS BAD HABITS he was 3.
He stayed at San Diego for 9 months, then was moved to Ohio and then to San Antonio. He finally formed a bond with Kayla even fighting with Ky over her and was then reunited with his brother and they too became really close. Despite the bonds he made as he would have naturally been at his mothers side all his life, he was then sent to Loro Parque never seeing any of them again. People wonder then why he killed poor Alix Martinez, Seaworld knew he was messed up as they tried to correct his bad habits, who gave him those bad habits? Even though they knew about Keto they still let the trainers in Loro Parque swim with them, being supervised by Brian Rokeach didn't stop the death.

As you know the orca so well what possible reason was there to take Tuar from Kalina? He too would still be at his mothers side?

Then there is Skyla how old was she when Seaworld took her from her mother? 2, what was the reason for that??

When Kalina died from septicemia, she had none of her calves with her, why was that as Seaworld state they don't separate them??? Those 4 orca would have stayed in Katina's matriline after Kalinas death.

Katerina - Katina's second calf was taken aged 2, and sent to San Antonio, she died there aged 10. Why did they take her from Katina as Seaworld's lovely videos say they respect the mother and calf bond, and the simpering mother of 4 says 'we wouldn't do that' but they would and have.

Taku was so messed up he mated with his own mother, producing Nalani a full inbred who can go nowhere as she will never be part of the breeding programme, if she ever is there certainly would be uproar as no respectable institution would breed an animal knowing they were full inbred. As you know them so well, how was that allowed to happen?? He died at San Antonio of pneumonia aged 14.

Unna - where is Unna and how old was she when she was moved?? She has been on birth control since miscarrying her first calf. Why isn't she still with Katina??

Ikaika was only 4 when he was traded for 4 Belugas and sent to Marineland. After winning the court battle he was brought back to Seaworld, so why wasn't he brought back to the same tank as his mother as he would have been with her for life in the wild??

Nalani - beautiful Nalani can't go anywhere as she can never be used for the breeding programme due to being the result of mother and son mating.

7 calves later she had Makaio, who is still with her. She should have all her calves with her and as 3 of them have died from septicemia, pneumonia and infection which then raises the question of how have these orca got those infections as Seaworld says their tanks are free from bacteria, infection and pathogens. Look through the causes of death for the other orca too, this is obviously NOT the case.

To produce a video saying Seaworld are aware of the mother and calf bonds makes the situation so much worse, as ignorance could have been an excuse, now there is no excuse for separating these orca.

Answer that one Eric, what sort of company would use that particular orca as an example of respecting the mother and calf bond? The only true statement in the above video is ''the truth is on our parks'' and it most certainly is as anyone can check the whereabouts of those orcas, and the necropsy reports for the others.


What sort of company would say they were offended as Blackfish said they blamed Dawn for her own death, when the court transcripts of the case show they blatantly did? 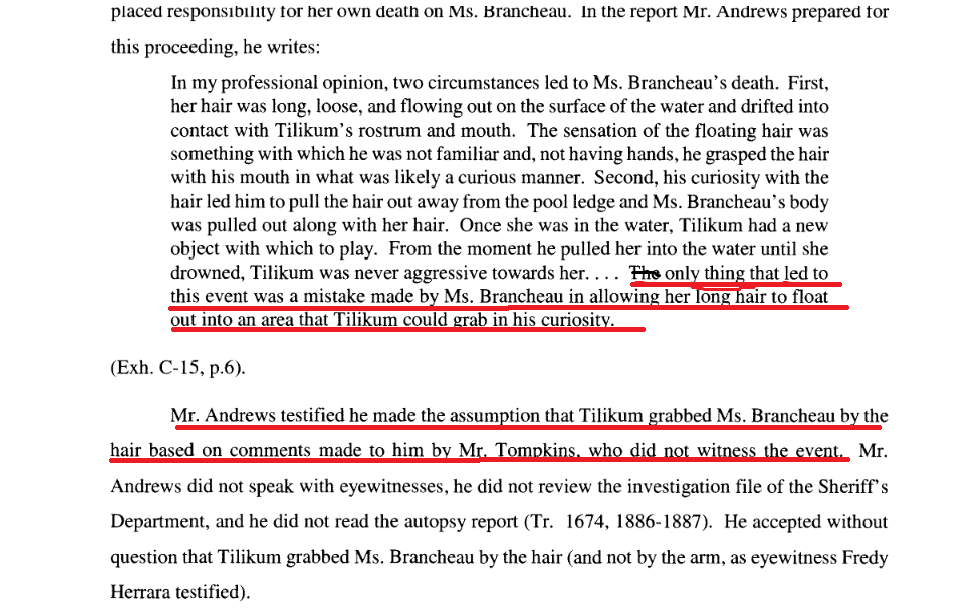 “Instead of doing what SeaWorld did to combat negative publicity - deleting Facebook comments, blocking people from their social media accounts and creating a “Truth Team" - GoDaddy is thanking people for giving them feedback.” wrote The Dodo.
That is exactly what Seaworld did and what you do and still do!  Why do you do that are you frightened that those people Seaworld are clinging onto might actually find out the truth? Wouldn't it be better for Seaworld to actually address those issues rather than pretend they didn't happen or have the likes of you keeping people confused with your obsession with PETA and Dodo?

Wonder if GoDaddy got any of the hate tweets or Facebook comments, err… sorry “feedback”, threatening arson and shootings?
Here’s is just a bit of the “feedback” SeaWorld has received that we could find with a quick search:
We all have feedback Eric, it isnt just one sided, so to add to yours, I'll add some from your side, as you chose to leave names on yours I'll return the favour. Here are the ones your side post and at the end you can see who fuels things like this
Lets start with this, an event organised and still showing on Stand with Seaworld - Protest the Protestors. Names for these 2 can be provided. 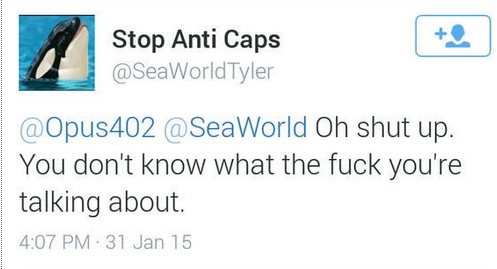 Who fuels all this hatred, as it tries to shift the focus from what people actually protest?

The same people who try to bully school children

The same people who AGAIN pick on children 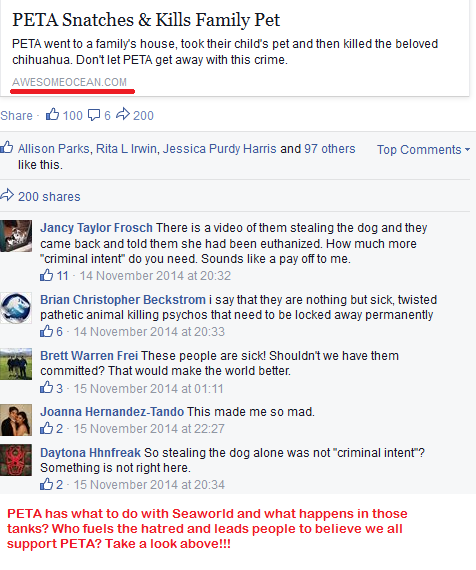 Wow!
Wow indeed!!  You post comments which look like they are from the same conversation to be fair, and I post many different ones, there are worse ones I could find too all linking back to one of your pages, but there are thousands and thousands of comments that are not like that at all.
I have personally had people thank me for suprising them and not being what they had been led to believe.


The PETA posse at The Dodo can’t seem to understand why SeaWorld won’t respond to comments like these.
Once again you back up all the allegations above about YOU fuelling this with just this sentence alone. Go look at Dodo as stated earlier ANYONE can post on there, including you, it is in no shape or form a PETA posse, but you once again lead people to attack it.

Normal people either ignore, delete, or report hateful and threatening comments like this. Not The Dodo. They demand SeaWorld say ‘Thank you for your feedback’.
They demand that Seaworld have some honesty and transparency as people can see straight through the lies they spin, especially you, which is probably why you fuel all this as you know your position against actual documented FACTS is now very weak and people can truly see Seaworld for what they are. Their lack of addressing anything put to them, or trying to cover it, just digs their hole deeper than it already is and you fuel that too.

After all, most of these people are PETA fans who read The Dodo.
What a load of biased rubbish and you know it too. Whats the problem are you frightened that those so close might learn a few things, see that they have been blindfolded by you and Seaworld's PR team, as it is all unravelling right before your eyes. You can block people from your pages but you cannot stop those fans from reading things like this blog or the DODO where they can look up facts for themselves. Seaworld will have to face the music over a lot of things as people uncover the truth and you, nor them can stop that.

Take a look through my blog, all the links people need, all the factual reports, necropsies, statements, court reports are all there so people can research themselves, not just blindly follow what they are told in a blocked off bubble. the DODO does the same.

Before you deleted his post stating it was a false profile, someone working for Seaworld gave you some very valuable advise, I suggest you read it again, it wasn't a false account at all as he replied to my request for confirmation. 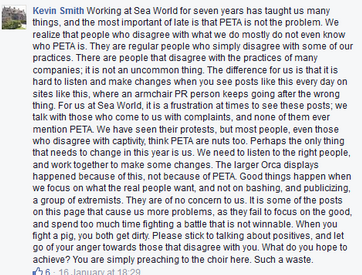