If you repeat the same thing over and over DO you believe it?

Once again there were some points raised in this video by Mark Simmons that condemned Seaworld AGAIN.

If you repeat things over and over do you start to believe your own lies?

Lets pick up what Mark Simmons had to say.

Point 1
at 2.10 - Talking about Blackfish and how he talked for 3 hours but his comments were cut and condensed. Seems to be missing the point that 3 hours of listening to Mark Simmons would have been impossible and he would have known that at the time, (no film is that long) and his comments were not dubbed or changed. IT WAS HIM SAYING THOSE THINGS.
Strangely in his Seaworld interview, he also moaned about talking for 3 hours again it still doesn't alter the fact that IT WAS Mark Simmons and he DID say the things he did in the clip.

Point 2 -
The sensationalism of this one  incident by one whale, who was not a Seaworld whale - ONE??? What about Alexis Martinez KETO is a Seaworld whale what about him??What about Daniel Dukes, what about Annette Webber, John Silick, Annette Eckis, and all the other poor trainers involved in these incidents?? How disrespectful can you possible be?


Point 3
He brought Tilikum from Sealand - really?
Seaworld and Sealand both were chastised by NOAA 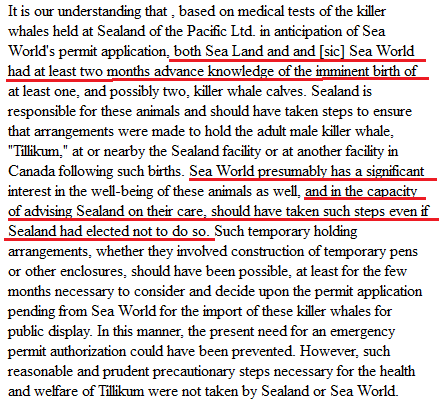 After it was mentioned that NONE of the Sealand orcas should be on display and Tilikum may be better off being rehabilitated back to Iceland, Brad Andrews pre empted that and contacted the Icelandic government to prevent it. 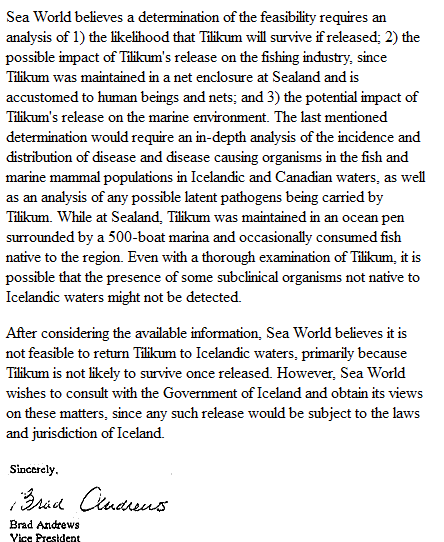 Is Mark Simmons saying he was party to all this underhandness which can be proven in the documents above?

Point 4
2:41 - Now Tilikum isn't a Seaworld whale, he wasn't brought up in the Seaworld system, but as you see above Seaworld were involved with Tilikum whilst at Marineland and they claim him as theirs over and over when trying to prove their longevity figures. Thanks for straightening that Seaworld lie out Mark.

Point 5
It took 2 days to convince me to participate in the film - lot of convincing then seeing as you talked for 3 hours and then had a beef that it wasn't all used lol.

Point 6
Seaworld would have terminated John Hargroves job had they been aware of it. Strange dont you think that is it at least 5 years old and only happened to appear the same week as the book release?
Yet Seaworld were cited themselves for the exact same thing themselves

Point 7
at 6:04 Mark left in 1996 so hasn't been a seaworld trainer for 19 years.
6:43 Not one incident in the 14 years him and his wife worked at Seaworld
That would make it 1982 so lets check.
Check yourself how many incidents there were at Seaworld during those times. HERE  Most are taken from Seaworld's own animal profiles. Who's fault are they Mark? You can't say these aren't Seaworld orcas can you?

Point 8
- 6:50 You are right Mark, they are not faceless beings, they do have their own personalities, they are all documented in their Animal Profiles too. You might find Orkid's interesting seen as she has been attacking trainers since she was one year old. As she was born in 1988 her attack history alone blows your not one incident line out of the water.

Point 9
- 7:10 You are quick to point out Corky's personality training the trainers, but as you were quick to point out Tilikum isn't a Seaworld orca trained in the Seaworld system as an excuse for Dawn, presumably the same excuse for Daniel Dukes wouldn't it be correct to do the same for Corky, she was captured in 1969 and didn't arrive at Seaworld until 1987, if not being trained by Seaworld is the issue for Tilikum, wouldn't it be the same for her, Ulises,
Point 10

As for your own book, I sent you this many months ago to which you said you would reply when you were not busy. I'm still waiting as many people conflict the thing YOU have to say about Keiko too.
If you expect John Hargrove to defend things that have been documented and logged on profiles and court reports with regards to Blackfish then surely the same should apply to you, especially as Robin Friday your colleague in Ocean Embassy also says the Keiko Project was a success.
I look forward to your reply and if you have lost it, here it is again