Once again Eric Davis scan reads and tries to blag his way through a document missing out vital bits of info and he thinks this drivvel is credible lol.
First lets put the letter at the top, not at the bottom, so those with their own minds can read it for themselves.
Secondly lets look at the differences. Naomi Rose, scientist and PHd, on the IWC scientific committee and deemed worthy as an expert in court cases.
Eric Davis - Seaworld fan, thats it, just a bog standard fan with no scientific qualifications what so ever.

Now lets see what he missed out hoping people didnt read the letter.

The anti-aquarium crowd continues to take hypocrisy to stratospheric heights.
Dr. Naomi Rose, a Marine Mammal Scientist at the partisan Animal Welfare Institute in Washington DC and part-time unsolicited media advisor, has been publicly advocating in the mainstream media for SeaWorld to retire their animals to sea pens.
Awesome Ocean recently exposed the animal activist's plans to build their own sea pen marine park. They hope to create their own SeaWorld, charge for admission and never really plan to release the animals.
Firstly the Sea pen marine park. We know the hybrids Seaworld created can never be released, they have no pods and ONLY exist in Seaworld parks, there is no such thing as a Northern Resident/Icelandic orca, or a transient/resident orca. No other orca keeping facility does that other than Seaworld. The orca populations have genetically kept themselves 'pure' for thousands of years but Seaworld ignored that fact, so where would they go?
Pods need to be found. Corky's family are well documented but can she survive as she is not toothless in the Seaworld tank, chewing the walls and shutting down in the presence of Ulises, all documented by Seaworld.
What about those who have had their teeth drilled, why do they have to be flushed out Eric? How do you release those animals?

They can however, feel the ocean rhythms, forage, explore and catch their own food in a sea pen, whilst still having the care Seaworld has made them have i.e. tooth flushing, contraception as in Unna as Seaworld have said they cannot risk another pregnancy with her, and what about inbred Nalani? Did you forgot all those things Eric, things that Seaworld have created?

Family groups could however be put back together, you know Eric the ones Seaworld said they didn't seperate. Could you tell everyone where Takara's calves are?  Who lives with Tilikum and where is his mum? Where are Katina's calves? Did you miss that one too?

Oh, and they intend to force accredited zoological facilities to give them the animals.
There's just one very massive problem.
Naomi Rose, the icon of the anti-aquarium movement, is on record slamming the very idea of sea pens for marine mammals. Dr. Naomi Rose. Photo courtesy of: Voice of San Diego
In a 2012 letter co-authored by Rose to the Coastal Zone Management Commission in St. Thomas, Virgin Islands and to the US Army Corp of Engineers, she details her opposition to a sea pen proposal and why building them can be harmful for animals and bad for the environment.
And she goes into great detail.
And it's bad - for sea pens and the animals in them.
In Dr. Rose's lengthy 11-page letter she breaks down her complaint into a number of categories that are a step-by-step rebuttal of every activist claim in favor of these death traps. It's an indictment of Dr. Ingrid Visser's claims for building their "Cetacean Sanctuary".
She does indeed Eric, lets look at the bits you missed out A view of the activist sea pen lagoon
Dr. Rose lists a string of negative environmental effects a closed off lagoon (similar to the activist plan for their "sanctuary") would cause.
Adding to this list- only one study was put forward regarding removal of the waste, that of fish eating it. Citing Sazimas study of wild dolphins which was a totally different species and different eco system. So other alternatives needed to be shown. DID YOU MISS THAT BIT ERIC OR DIDN'T IT FIT YOUR AGENDA? 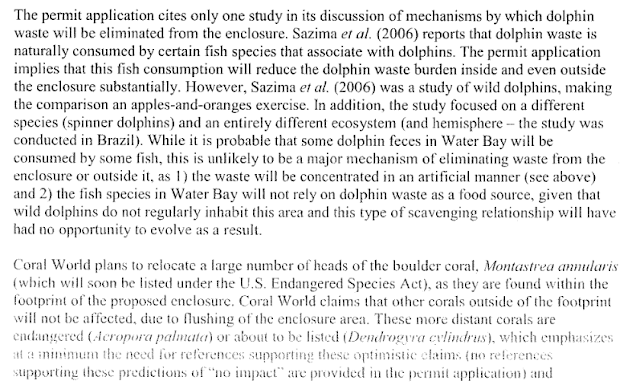 Dr. Rose details everything that can go wrong in an open ocean sea pen and how these pens are really death traps for the animals in them. "Lack of environmental control in sea pens and enclosures that have a direct link to the sea can often make them inadequate or poorly suited for the maintenance of cetaceans", writes Rose.
For example:


Eric you missed the bit about the jet ski operation next door too and the fact that this facility said dolphins adapt really well to traffic. Shame did you not read that bit?

Ingrid Visser claimed in her presentation that their facility would be all about educating the public.
However her colleague, Naomi Rose, says it's not possible:


"There is reason to believe that captive cetacean attractions actually miseducate the public about wildlife and the marine environment."

Awww again Eric a vital sentence missed off, no mention above of the reference to tricks was there, so here it is for you and your fans so they can see how missing off vital bits of information leads people up the wrong path and you are getting very good at selective reading aren't you?

Shell Game - Deception
Rose submitted this factual case against sea pens to government bodies and clearly illustrated these pens as nothing more than tortuous death traps. She wouldn't purposefully mislead two responsible agencies, would she?
It wasnt ''pens'' Eric it was a report on the one pen in question not all of them.
In Rose's 2015 Tedx Talk, she advocated for people to encourage facilities like SeaWorld to "retire" their animals to sea pens.
It's pretty clear that people will say anything when it benefits their agenda.
You are so right Eric, its becoming a writing style for you isn't it?

We will continue to support accredited zoological and federally regulated facilities like SeaWorld, the Georgia Aquarium and more who provide amazing man made environments for their animals. We will also support the world respected Dolphin Research Center who as proven that they can provide a safe, healthy and educational sea pen environment for their animals.
You can read the full letter here.

I am so glad you put the full letter on there, so now hopefully people WILL read it and see just how much you have manipulated this document to suit your own agenda yet again. I really don't know why you bother as it a, makes you look incompetent and b, throws any little bit of credibility Seaworld might have had right out of the window yet again. Makes no wonder you block anyone that isn't a fan of yours as you would look really really silly wouldn't you?
Either report things as they stand Eric or don't bother at all as you make the institution to stand for look even more ridulous.
In fact carry on the good work lol.
Posted by Unknown at 17:25