This must be one of the oldest stories of humans being helped my other animals.

The killer whales of Eden, Australia were a group of killer whales  known for their co-operation with human hunters of other whale species. They were seen near the port of Eden in southeastern Australia between 1840 and 1930. A pod of killer whales, which included amongst its members a distinctive male called Old Tom, would assist whalers in hunting baleen whales.

Old Tom's role in the hunt was to  alert the human whalers to the presence of a baleen whale in the bay by breaching or tail slapping at the mouth of the Kiah River, which is one of the smallest rivers, where the Davidson family had their tiny cottages.

This role endeared him to the whalers and led to the idea that he was “leader of the pack,” although such a role was more likely taken by a female (as is typical among killer whales), probably the whale known as Stranger. After the harpooning, some of the killer whales would even grab the ropes in their teeth and aid the whalers in hauling. The skeleton of Old Tom is on display at the Eden Killer Whale Museum, and wear marks can still be seen on his/her teeth from grabbing the ropes. 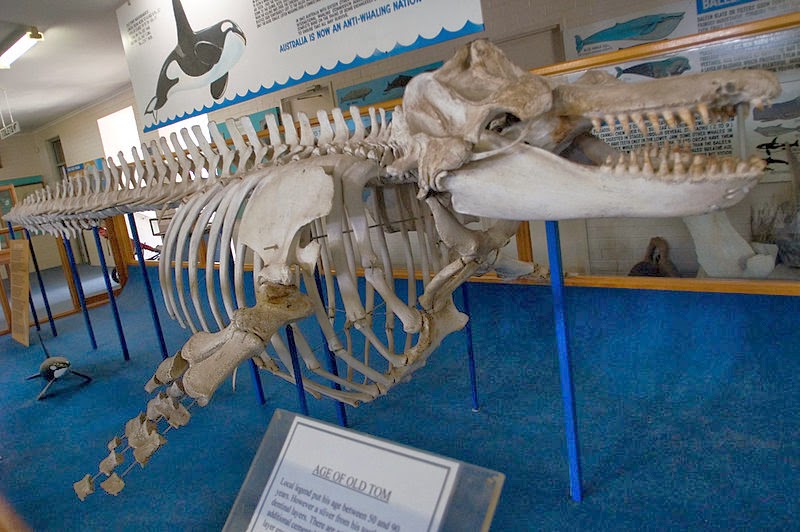 In return for their help, the whalers allowed the killer whales to eat the tongue and lips of the whale before hauling it ashore, providing a rare example of co-operation between humans and killer whales. The killer whales would then also feed on the many fish and birds that would show up to pick at the smaller scraps and runoff from the fishing.

The unique behaviour of killer whales in the area was recorded in the 1840s by whaling overseer Sir Oswald Brierly in his extensive diaries.It was recorded in numerous publications over the period and witnesses included Australian members of Parliament. The behaviour was recorded on movie film in 1910 by C.B. Jenkins and C.E. Wellings and publicly projected in Sydney, although the film is now missing and believed to have been destroyed/damaged in the 1930s when bank vaults in Sydney, where they were kept, were flooded.

Many times the whales would smash the boats of the whalers. They called the whale tails 'the hand of God'.
Once in the water the whalers were at the mercy of sharks. Old Tom and his pod, despite being mammal eaters, swam around the whalers and protected them from the sharks, sometimes even pulling drowning whalers back to the surface.

Sometimes the whalers saved the killers too, untangling them from lines and nets, the whalers said they made a kind of purring noise when they knew they had been helped.

For almost 100 years this relationship continued. There was a horrible accident where a family drowned, the next morning the villagers found the baby, a couple of days later they found the boy, but they couldn't find Jack the adult. The orca;s never left the bay, and old Tom circled the same area over and over for almost a week. When they went to look where he was they found the body, on the day of his funeral Tom provided an honor guard and swam alongside the boat.

Even back then there were people who didn't like them, didn't want to help them and also killed one of the pod and once again the trust was broken by us. See their story on the video below.

Many of the Eden killer whales were individually known and named, often after whalers who had died. Some of best known killer whales included Tom (who died 15 September 1930), 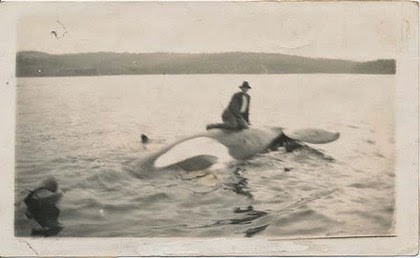 All those years ago people knew that killer whales were not the terrible killers they were made out to be. Those in the Captive Industry state that without captives people would still think orca were terrible vicious monsters, this proves that this would not have been the case as travel spread the word of these creatures would have spread too.

There story and eye witness accounts can be seen here.

Email ThisBlogThis!Share to TwitterShare to FacebookShare to Pinterest
Labels: co-operation of orca and man., Killer whales of Eden, Old Tom