The First Cetaceans on Display 1861 - birth of the captive industry. 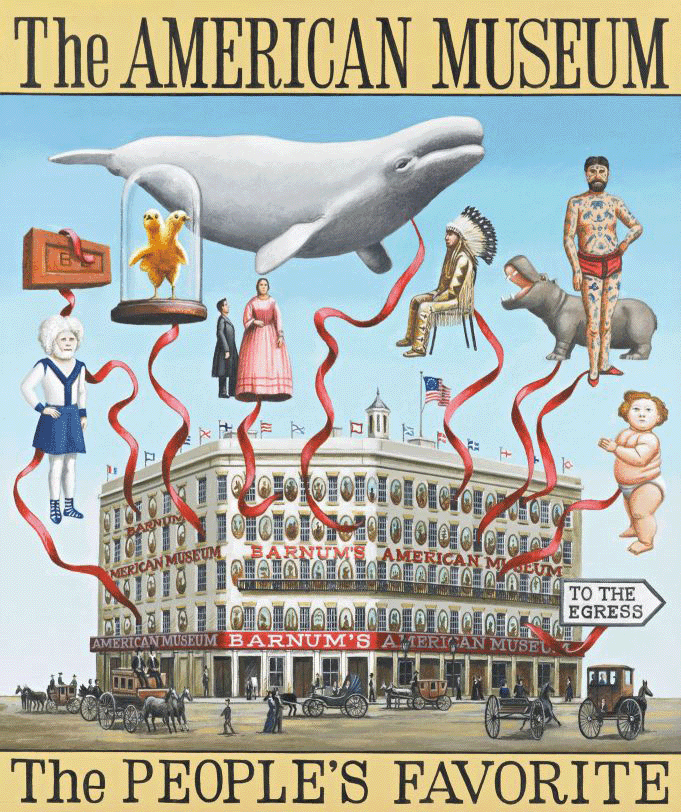 Barnum opened his museum on January 1, 1842 to create a place where families could go for wholesome, affordable entertainment, but his success drew from the fact that he knew how to entice an audience. Its attractions made it a combination zoo, museum, lecture hall, wax museum, theater and freak show, that was, at the same time, a central site in the development of American popular culture. Barnum filled the American Museum with scientific instruments, modern appliances, a flea circus, a loom run by a dog, the trunk of a tree under which Jesus’ disciples sat, a hat worn by Ulysses S. Grant, an oyster bar, a rifle range, waxworks, glass blowers, taxidermists, phrenologists, pretty-baby contests, Ned the learned seal, the Feejee Mermaid (a mummified monkey’s torso with a fish’s tail), midgets, Chang and Eng the Siamese twins, a menagerie of exotic animals that included beluga whales in an aquarium, giants, Grizzly Adams’s trained bears and performances ranging from magicians, ventriloquists and blackface minstrels to adaptations of biblical tales and “Uncle Tom’s Cabin.”

On July 13, 1865, the American Museum burned to the ground in one of the most spectacular fires New York has ever seen. Animals at the museum were seen jumping from the burning building, only to be shot by police officers. The Beluga's obviously did not escape.

Barnum tried to open another museum soon after that, but that also burned down in a mysterious fire in 1868. It was after this time that Barnum moved on to politics and the circus industry. Barnum's American Museum was one of the most popular attractions of its time

The two newspaper reports below show the excitement of capturing wild whales, and despite their deaths, Barnum used this as a hook to get people through the door, the animals deaths it seemed were irrelevant.

The Whales, New York Tribune, August 9, 1861
In the summer of 1861, Barnum trumpeted his latest American Museum exhibit: two live white (or beluga) whales. This newspaper report on the arrival of the whales reflects the excitement and wonder that, in an era before zoos, New Yorkers might have felt at seeing live animals in captivity. This was Barnum's first attempt to exhibit live whales (the museum was on its eighth and ninth whales when it burned down in 1865), and his promotion of the animals highlighted the enormous undertaking of capturing them in Canada and transporting them New York.
A real live whale is as great a curiosity as a live lord or prince, being much more difficult to catch, and far more wonderful in its appearance and habits. After all people are people, and have much the same ways of feeling and doing. But when we get among the whales, we catch glimpses of a new and neat thing in the nose, recall the narrative of Jonah without throwing a shadow of doubt upon its authenticity, and appreciate keenly the difficulties with which mermaid society must have to contend.
We owe the presence of two whales in our midst to the enterprise of Mr. P. T. Barnum. He has had them in tow for a long while, but has kept his secret well, and it was not until his own special whaler telegraphed from Troy that he had come so far into the bowels of the earth with his submarine charge, and all well, that he felt warranted in whispering whale to the public. The public was delighted but not surprised, because it feels that the genius that is equal to a What Is It is also equal to the biggest thing, and would experience no unusual thrill of wonder if a real iceberg, or a section of the identical North Pole, should be announced on the bills of the Museum.
But flocks of the public sought the Museum yesterday, and were not disappointed. They saw not, as Pelonius, something "very like a whale," but the original animal in his original element. The bears, and the anacondas, the hatchet, and the seal, sank into merited insignificance, although they will have their day again if the whales should expire. The transfer of the fish was neatly effected. They traveled the whole distance in first-class hermetical boxes, filled with water and thickly lined with sea-weed, and were landed, if the expression may be used, in the new and excellent tank provided for them in the basement of the Museum. This tank is 58 feet deep and 25 in width, has 7 feet of sea water in it, and seems to suit the whales eminently. Mr. Barnum has fears that the pets will have but a brief, if brilliant, career, in their new quarters, but we prefer to predict for them a long and happy one.
These are white whales and were taken near the Labrador coast by a crew of thirty-five men. The largest has attained the extreme size reached by this species, and is about 23 feet long; the other is 18 feet long. Their form and motion are graceful and their silver backs and bellies show brightly through the water. A long-continued intimacy has endeared them to each other, and they go about quite like a pair of whispering lovers, blowing off their mutual admiration in a very emphatic manner. Just at present they are principally engaged in throwing their eyes around the premises and paying small attention to visitors, upon whom, indeed the narrative of Jonah has a strong hold. Yet neither of these whales should make a single mouthful of a man of ordinary size. Even if one of them should succeed in swallowing a man, he could just stand up with the whale, and make it at least as uncomfortable as himself.
Here is a real "sensation." We do not believe the enterprise of Mr. Barnum will stop at white whales. It will embrace sperm whales and mermaids, and all strange things that swim or fly or crawl, until the Museum will become one vast microcosm of the animal creation. A quarter seems positively contemptible weighed against such a treat.

Source: New York Tribune, August 9, 1861
At some point there must have been one whale left as this ad shows 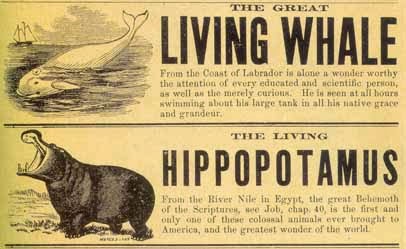 Ad for Whales, July 2, 1865
In an era before the common exhibition of animals in zoos and circuses, the arrival of "two living white whales" in lower Manhattan was a noteworthy event. While other natural history museums of the period tried to present animals with images of their natural habitats and avoided mention of their capture, the American Museum often stressed the opposite. The animals themselves, as well as their natural habitats and habits, frequently paled in comparison to Barnum's heroic tales of acquisition. In the case of the beluga whales, the exhibit highlighted the elaborate process of their capture and transportation to New York. Barnum spurred attendance with hints, born out by past experience, that the whales might not survive for long in captivity.
BARNUM'S AMERICAN MUSEUM
. . . . TWO LIVING WHITE WHALES
weighing TWENTY THOUSANDS POUNDS per registers
Hudson River Railroad Co.,
after several months of immense labor and at an expense of
NINE THOUSAND DOLLARS,
were captured and brought to this city from the coast of Labrador and are
now disporting in that MINATURE OCEAN,
the MAMMOTH WHALE TANK,
the only specimen to be seen alive.
NOW IS THE TIME
to see these wonders as
THEIR LIVES ARE UNCERTAIN,
seven of the same species having died while being exhibited at this
Museum.
GEORGE, the great WHALE CAPTURER, will enter
the WHALE TANK every day at 10 3/4 A.M., 2 1/4 and 7 3/4 P. M.
Source: New York Herald July 2, 1965

In hindsight Mr Barnum had a lot to answer for, captive cetaceans started to become an interest and viewed as money makers,  although their success was short lived as in those days they were hard to keep alive and it was not until 1938 that the first display facility opened properly.   After the fires Mr Barnum went on to display his cetaceans as part of the circus. The picture below puts me in mind of the Russian Circus's still circulating today.

Through his desire to show the world animals they might not have seen, and in his lust for glory at being able to capture such creatures,  the captive industry was born. 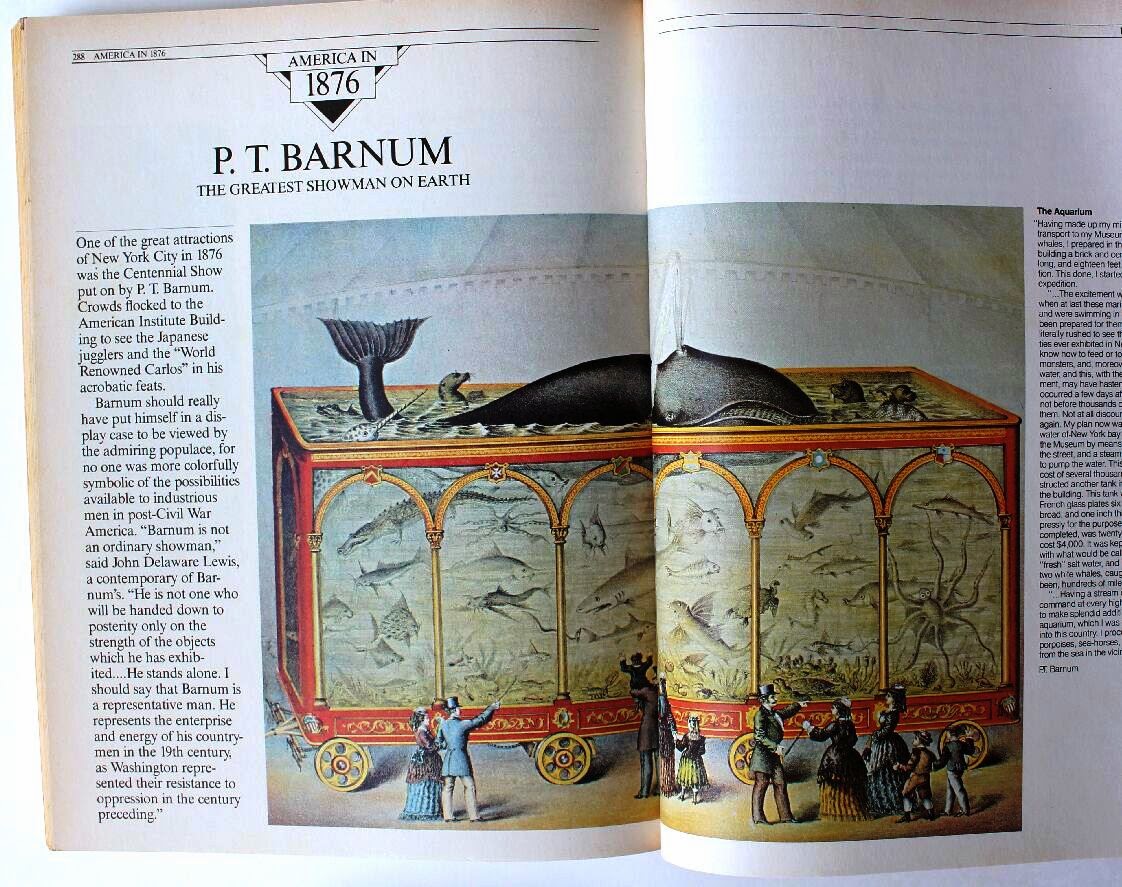