Seaworld - when is it time to be worried?


'Seaworld state they aren't worried about Shamu's and Kandu's deviant behaviour and have no plans to change performance schedules or procedures.'

1984/02/23 7-year-old female Kandu 5 took trainer Joanne Hay in her mouth and pinned her against a wall during a performance.

1984/08/12 Two killer whales grabbed the legs of trainer Bud Krames and pinned him against a glass retaining wall during a performance. Krames suffers bruises.

1984/11/02 7-year-old female Kandu 5 briefly grabbed the legs of trainer Georgia Jones during a Shamu show but released the trainer unhurt. The 4,500-pound killer whale took Jones’ legs in her mouth, but didn’t bite down.

1986/11/16  9-year-old female Kandu 5 pressed her snout against trainer Mark Beeler and held him against a wall for a few seconds during a performance before several hundred spectators.

1987/03/04 A six-ton orca suddenly grabbed trainer Jonathan Smith, 21, in its teeth, dove to the bottom of the tank, then carried him bleeding to the surface and spat him out. Smith gallantly waved to the crowd - which he attributed to his training as a Sea World performer - when a second orca slammed into him. He continued to pretend he was unhurt as the whales repeatedly dragged him 32 ft to the bottom of the pool. Smith was cut all around his torso, had a ruptured kidney and a six-inch laceration of his liver, yet he managed to escape and get out of the pool. Later reports indicate that the whales involved had been 10-year-old female Kenau and 9-year-old female Kandu 5.

1987/06/15 Trainer Joanne Webber, 29, suffered a fractured neck when 9-year-old female Kandu 5 landed on top of her and pushed her to the bottom of the pool during a practice session. Webber had five years experience working with orcas.
She sued Seaworld in a lawsuit filed Tuesday in San Diego Superior Court that Sea World and its parent company, Harcourt Brace Jovanovich, knew that the whales were "ferocious and dangerous" and were "likely to attack and injure human beings," but induced her to enter the pool by telling her the whales were "safe" and "gentle."
Webber's injuries were aggravated by Sea World personnel who delayed treatment, insisting that her wetsuit be removed at the park so that it would not be damaged by medical personnel who would try to remove it at the hospital, the lawsuit says. She had a broken neck and they were worried about the suit!
Webber, who returned to a job at Sea World after her health improved, went back on medical leave last week after Sea World officials requested that she either take an office job at the park or go back in the water with the whales, according to Paula Tupper, an associate in the law firm of Patrick R. Frega.
Her injuries included fractures of the first cervical vertebra, contusions of the skull and scalp, and bruises to the left arm and shoulder. After a year, two cracks in a vertebra in Webber's neck still have not healed completely, and she has lost 50% of the side-to-side motion in her neck, Tupper said.
'In Great Pain'
Webber was able to free herself and get out of the pool after the whale attack, Tupper said. Park personnel then allowed her to walk about 50 feet from the pool to an enclosure, where she was told to remove her wetsuit, Tupper said.
"In great pain" and unable to comply, the lawsuit says, she was "stripped of (the) wetsuit by Sea World personnel." Tupper added that Webber was told to dress and walk about 200 yards to a waiting ambulance.

1987/09/30 While working with one orca during a performance trainer Chris Barlow, 24, was being rammed in the stomach by another orca. Barlow was hospitalized with minor injuries.

1987/11/21 Trainer John Sillick, 26, suffered fractured vertebrae (T1 to T12), a fractured femur, and a fractured pelvis after 19-year-old male Orky 2 breached on top of him while riding on another orca during a performance. Sillick had less than two years experience working with orcas.

At this point Seaworld took trainers out of the water -  Numerous San Diego newspapers reported on a "white paper" disclosing at least 14 trainer injuries of various severity while working with orcas within a five-month period in 1987. Only a few of the incidents have been described in the media.

''SAN DIEGO — Training killer whales as dancing partners is a sensitive business, hovering somewhere on the cusp between science and art. Trainers say it takes the eye of a baseball player, the intuitions of a psychoanalyst and, occasionally, the nerves of a fighter pilot.

Communication between animal and trainer occurs through a private vocabulary of gestures, posture, a quick sweep of a fin. A sudden leap or a sharp bump might signal affection or aggression. A trainer who misinterprets may fall dangerously out of step.

"You need to be able to read your animals, to see if anything is bothering them," said Karen Pryor, an animal behaviorist and longtime marine mammal trainer. "Killer whales, if they get angry, the white of the eye turns red. You never want them to get that angry."
Sea World of San Diego for 20 years has pioneered in that personal approach to training captive killer whales, using psychological techniques to choreograph the extraordinary whale ballet that is the symbol and centerpiece of the marine park chain.
But in recent weeks, it has become clear that something is awry. A young trainer remains hospitalized after being virtually crushed by a killer whale. In the aftermath, a rash of other trainer injuries have come to light, including 14 in the past five months.
Suddenly, Sea World has banished its trainers from the killer whale pools. It has banned all contact between whales and trainers or the audience. And its parent company has abruptly fired the park's top officials in charge of animal care and training.
Park Being Picketed
The park president, also fired, is suing the company. Animal rights groups have begun picketing the park. And last week, William Jovanovich, chairman of Sea World's parent company, Harcourt Brace Jovanovich, let it be known that he would happily unload the entire chain, for the right price.

The fault, in Jovanovich's view, lies with Sea World: He blamed park management, supervision and the way trainers and whales have been trained. Others have blamed corporate demands on the park as the chain rapidly expanded and note that Jovanovich himself has been deeply interested in Sea World management--going to far as to help design the park's logo.''

Jovanvich stated he had been MISLEAD by Seaworld's management and promptly suspended Butcher, park president Jan Schultz and zoological director Lanny Cornell, the park's longtime zoological director and a well-known figure in the world of captive marine mammals. The company is currently discussing severance with the three former managers.  Full article here

When Butcher had brought in his new methods and tried to standardize training in all four parks, he alienated several veteran trainers. In one year, about 35 trainers departed, according to Bud Krames, a senior trainer who left because he didn't agree with the system. New trainers had to be hired. Three of the five trainers in San Diego had three months or less experience working with orcas. Sillick, a veteran by comparison, had less than two years. In the year following the accidents, some of the injured trainers began to blame Sea World for not warning them about the "dangerous propensities of killer whales" as one lawsuit put it. Jonathan Smith's lawyer charged that Sea World and HBJ "negligently and carelessly owned, maintained, trained, inspected, controlled, supervised, located, transported and placed" the orcas, thereby exposing Smith to serious injury. Sillick and Weber also filed lawsuits. All three were later settled out of court with gag orders imposed. Following the terms of their deals with Sea World, the lawyers have refused to reveal any more than the basic details of their clients' cases. This means that no one can know any findings behind these cases; no one can learn or benefit from the thousands of pages of prepared evidence.

3 cases were settled out of court with gagging orders incorporated  Following the terms of their deals with Sea World, the lawyers have refused to reveal any more than the basic details of their clients' cases. This means that no one can know any findings behind these cases; no one can learn or benefit from the thousands of pages of prepared evidence.

After Butcher left, Sea World revamped the training programme. Under new chief trainer Michael Scarpuzzi, they returned to a simple, consistent approach of rewarding each behaviour. Instead of going into the water, trainers began directing the whales from the deck with hand or underwater acoustic signals. But less than half a year later, they were back in the water.

In 1989 this tragic incident occurred which lead to the death of Kandu V.

Orkid was 11 months old when Kandu V died. She was out performing the very next day and once again Seaworld forgot to tell the trainers to change their script. The statement Seaworld gave said Orkid was sufficiently independant of its mother, yet the trainer as part of the show had just told the audience that Orkid would be nursing until at least a year and a half old. This was obviously untrue as little Orkid came out with Corky who was made out to be her mother in the show. 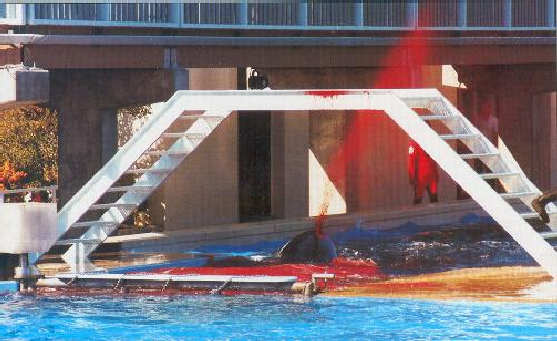 As we know from incident reports and Seaworld's own animal profiles the incidents did not stop there and continued until trainers were made to leave the water by OSHA after the death of Dawn Brancheau in 2010.

Despite the date of this article, everything above shows that from the beginning 'the show' was the the most important issue, not the orcas, not the trainers and from the recent debate between Seaworld and Naomi Rose, we can see that to date nothing has changed.