Newpaper archives, old interviews and court transcripts show Seaworld, their supporters and the Marinepark industry untruths over and over again. The articles also show that the statements given today have not changed since captivity began, but this time the voices against captivity are stronger and louder.

Was Daniel Dukes pulled in by Tilikum? We now know he does pull people in don't we? 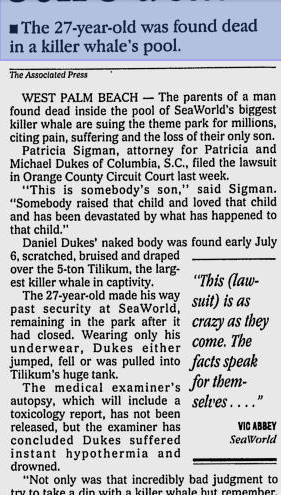 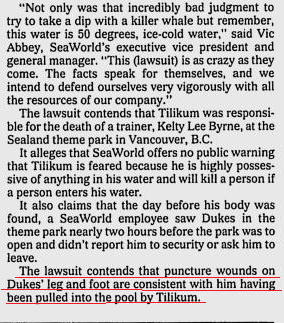 Daniel Dukes medical examiners report can be seen here. It shows pre and post mortem injuries, and complete avulsion (ripped off) testes. This is not died from hypothermia as Seaworld state! 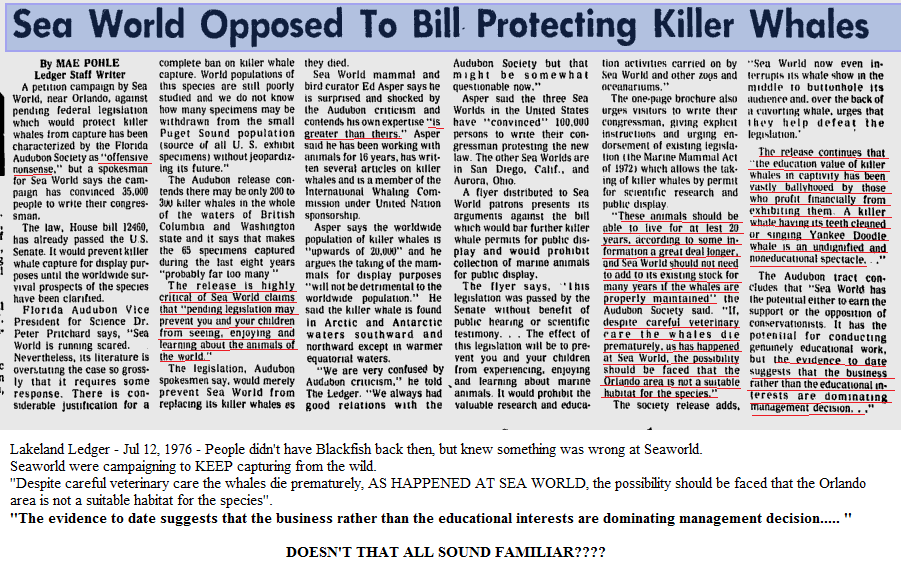 Samoas necropsy report can be seen here.
Samoa had a huge area in her brain that had been severely damaged by the spread of the fungus which originated in her uterus. She literally had brain damage as her brain was being eaten away by a common fungus found in soil.
It has been reported
Sea World – San Antonio (1992): Months before her death in 1992, horrified onlookers had watched the orca Samoa perform “bizarre, repetitive movements, hurling her body into the air and crashing down again and again upon the hard surface of a wide shelf at the side of her pool.” In a tragic note, Samoa was pregnant, and her full-term fetus died with her due to birth complications.
For this type of fungus to be present in Samoa’s uterus shows a couple of different things
Samoa had an open tear or cut in her uterus
While having the open cut Samoa had “something” inserted into her uterus that had the fungus on it
Samoa had a compromised immune system
Samoa went untreated for this specific fungus far too long which lead to her and her calf’s mortality. This fungus could have been easily transmitted via an infected medical instrument or even a trainer’s own hands. Transmission of the fungus could also come from the water in the pool when husbandry procedures were being performed. The orcas are not moved to clean water when conducting husbandry procedures. These sessions occur in the same pools the orcas swim, urinate, poop in and trainers swim/walk in.
Another option would be that during mating sessions with Kotar, he tore Samoa’s uterus and he himself infected Samoa with the fungus, either through the water transmission from the pool or himself directly. The risk for Zygomycosis is especially high when the skin or mucus membranes have been injured. Wound care is essential in preventing Zygomycosis. The wound must be carefully cleaned and monitored for signs of infection which obviously did not occur.
The cause of entry will never be known. There is no evidence SeaWorld followed up with the whys and how Samoa actually obtained the fungus.

Ulises arrives from Spain. The reason why Seaworld can say they haven't caught a wild orca for more than a decade is because they are capitalizing on moving orcas from other parks. As Brad Andrew states in the interview above ''IT ADDS TO THE GENEPOOL'' !! 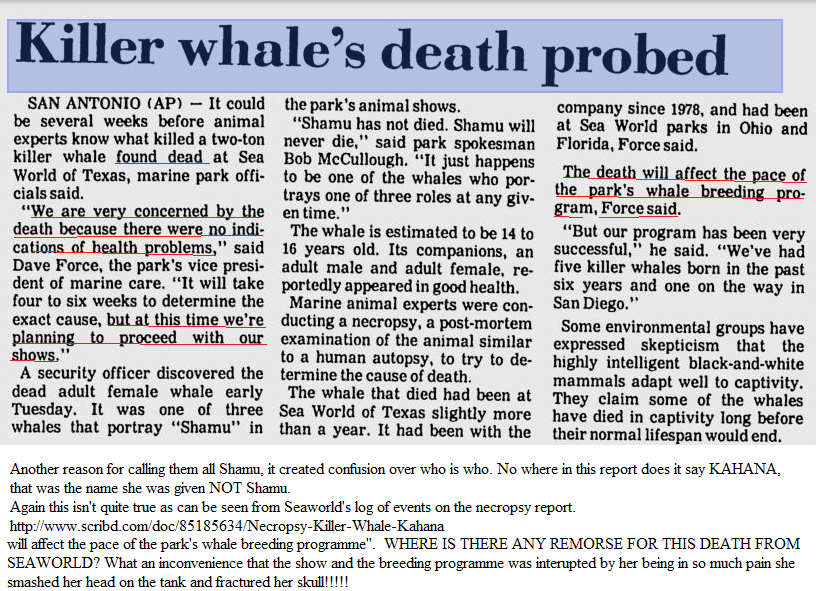 Kahana's story can be seen here 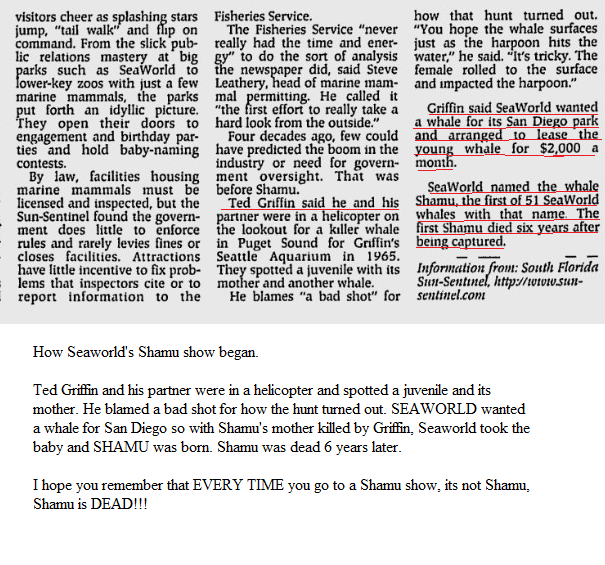 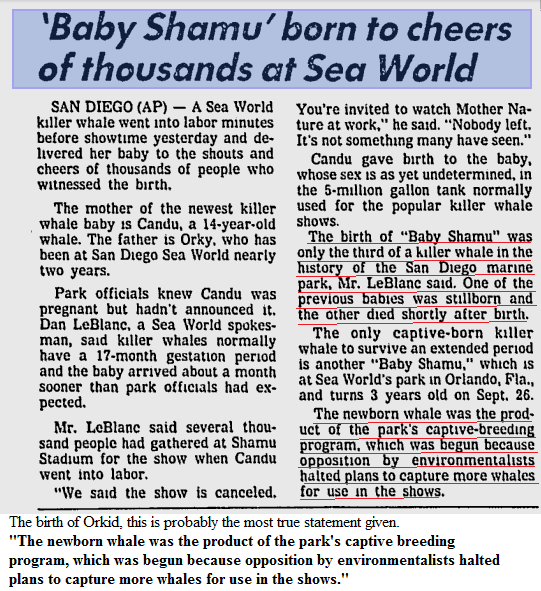 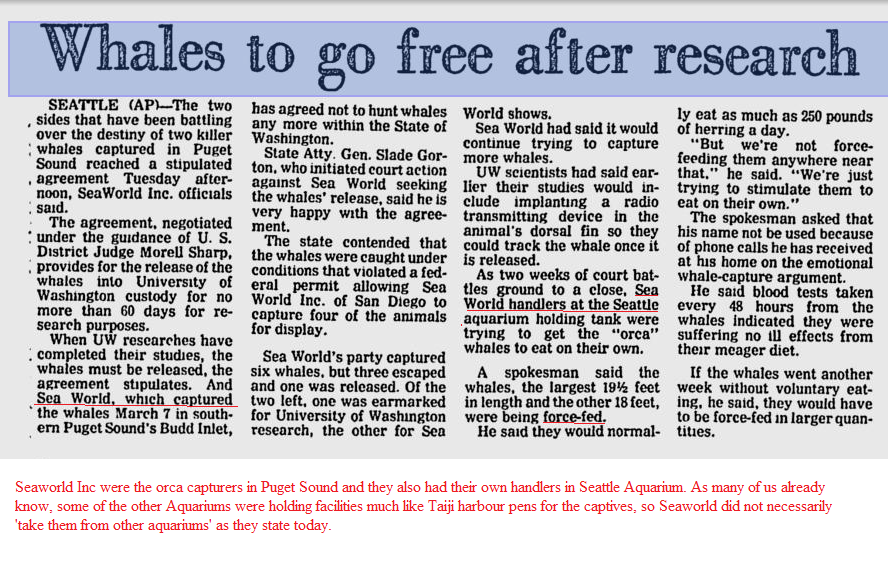 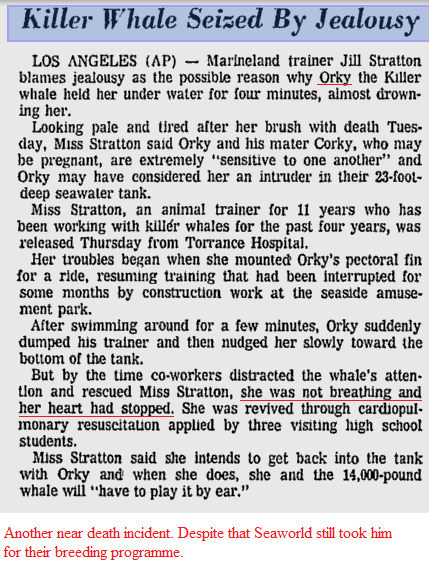