The full article can be seen here

I personally think it is a great opportunity to show how people like this use the information to manipulate and promote their own agendas. Luckily the link to the original article is at the end of this post which shows blatantly which bits have been missed out. I will add them in for you to show the comparison.

I think the manipulation of information is blatantly obvious now there is this website. When Stand with Seaworld and Unofficial Seaworld Podcast post on facebook, twitter, micechat etc, the posts move down the walls and are soon forgotten, when you post on a website it doesn't work like that and blatant misinterpretation is obvious for all to see. What the Awesome Ocean website says it is about here is not what is being produced and it is no different to the stuff people like myself have been debunking for a long time.
This time the manipulation is obvious and you will see at the end of the article some posts from their own supporters who are also starting to see that they too have been mislead,  it does not do them or Seaworld any favours as Seaworld tell enough untruths of their own.

Anyway with regards to this particular article see below. According to the data, killer whales born in captivity at SeaWorld parks survival rate is almost equal to wild pods, however, the survival rate of all SeaWorld orcas, including those captured from the wild, is lower than estimates of those living in the wild, though survival rates have steadily improved over the past five decades,.
You missed out this sentence altogether showing Seaworld officials stating they performed far fewer stressful and invasive procedures, proving that they DO do them!
Breakthroughs in training and medicine that allow the parks' medical staffs to perform far fewer stressful or invasive procedures are partly responsible for those successes, SeaWorld officials said.

You also missed out this proving pools had to be drained and animals restrained, and showing that now animals are BRIBED with herring and salmon.

Decades ago, an evaluation of a marine mammal at a SeaWorld park might require a pool to be drained for an X-ray or the animal to be restrained. No longer. Through behavioral training, and bribes of herring and salmon, the marine mammals at SeaWorld parks have learned to give breath, urine and blood samples on cue. Dolphins are trained to keep their heads out of the water so endoscopes can be passed into the stomach for a look. An elaborate laboratory on SeaWorld grounds allows samples to be evaluated immediately.
"We do a lot of self-critiquing of who is doing what, how," said Todd Robeck, vice president of reproductive research at SeaWorld Entertainment, Inc., which is the largest holder of marine mammals in the United States. "How are you handling food? How are you handling your moms and calves? What is the medical care?"

You also missed out this, which does mention the Marine Mammal Inventory report but in stating that killer whales DO NOT live as long as their wild counterparts.
Killer whales born in captivity at SeaWorld parks have a survival rate nearly equal to their counterparts in the wild, according to AP's analysis of data from the federal Marine Mammal Inventory Report. However, the survival rate of all SeaWorld's orcas, including those captured in the oceans, is lower than estimates of those living in the wild.

You totally missed out all 4 of these paragraphs, which no self respecting person posing an unbiased writer as you state you are would have done!!!
While the survival rates have steadily improved over the past five decades, they don't speak to the quality of life that whales, dolphins and sea lions have at SeaWorld parks. Critics say keeping intelligent marine mammals in captivity is inhumane and detrimental to their well-being.

Last year's documentary, "Blackfish," explored what may have driven a killer whale named Tilikum to kill veteran SeaWorld trainer Dawn Brancheau in 2010. The documentary argued that killer whales in captivity become more aggressive to humans and to each other.

Several entertainers, including Willie Nelson, Heart and Trisha Yearwood, pulled out of planned SeaWorld performances, and opponents have been protesting regularly outside SeaWorld's Orlando park.

"SeaWorld continues to exploit these complex and very socially interactive animals," said Bryan Wilson, a coordinator for the Animal Rights Foundation of Florida, during a recent protest.

The Associated Press calculated survival rates for killer whales, bottlenose dolphins, California sea lions and beluga whales at more than 170 U.S. parks and aquariums. Animals younger than a year were not included in those calculations due to the difficulty of making comparisons in the wild at that age.

— The average life expectancy for beluga whales was 19.5 years in captivity, with the high and low estimates ranging from 29 to 15 years. It was 24 years at SeaWorld parks. Average life expectancy estimates in the wild ranged widely, from 11.5 years to 62 years, depending on the method of calculating age.
You then missed out ALL this

On a recent day at SeaWorld's Orlando park, killer whales Melia and Kayla slid up on their sides on a shallow water platform in a pool and urinated on command into cups held by trainers. In another pool, a pregnant dolphin named Bossa was given an ultrasound.

Days later, pilot whale Freddie was bribed to the side of a pool with fish, and trainer Liz Thomas gently grabbed her tail. Veterinarian Stacy Dirocco, dressed in scrubs, swabbed the tail with alcohol, drew the blood and stuck it in a handful of lab tubes.

"We're looking for evidence of infection or inflammation. We're looking at electrolytes, liver values, kidney values, blood sugar," Dirroco said. "We want to make sure we're always one step ahead of any health problems."

"At the end of the day, I don't think you can meet the environmental or social requirements to keep animals, not only alive, but dare I say, happy," said John Jett, a former SeaWorld trainer. "The costs seem to outweigh the benefits no matter whatever the benefits may be."

Critics of keeping orcas in captivity say the marine parks should be doing better than the wild, given the advantages of medical care and a ready supply of food.

"It does not look like, given time, they will finally figure it out and be as good as nature (or better, which is really what they should be shooting for)," said Naomi Rose, a marine mammal scientist at the Animal Welfare Institute in an email, referring to the overall captive orca population.

Jett said the killer whales grow restless and combative in captivity. They often grind their teeth against concrete barriers and gates, breaking them and causing cavities that become conduits for infections, he said.
"The animals are really bored," said Jett, currently a visiting research professor at Stetson University in Florida.
Christopher Dold, a vice president of veterinary services at SeaWorld, denies that orcas wear down their teeth on barriers.
Whether the protests and criticism have taken a toll is up for debate. Sea World Entertainment, Inc. reported a 13 percent attendance decrease in the first quarter of the year, but the company said the decline was because the Easter holiday fell in the second quarter this year, pushing back spring break vacations.
Even as conditions improve in captivity, the marine mammals' native oceans are deteriorating because of human-generated pollution, said Dr. Mike Walsh, co-director of aquatic animal health at the University of Florida's College of Veterinary Medicine.
"People think it's a Cinderella existence out there, and it's a great place to be, but that's not the way it works," Walsh said. "It's survival out there. It's not a nice place to be unless you're at the top of the food chain, and even then you're affected by changes in your environment."

To miss out every single sentence which has any damning or detrimental information about Seaworld is not unbiased or truthful is it??

For more information on this topic, please see original article at http://abcnews.go.com/US/wireStory/seaworld-mammals-survive-longer-captivity-24413497

The original article can be seen here

Comments from usual Stand with Seaworld supporters showing that people are becoming more aware of the manipulations not only from Seaworld but from their supporters too. 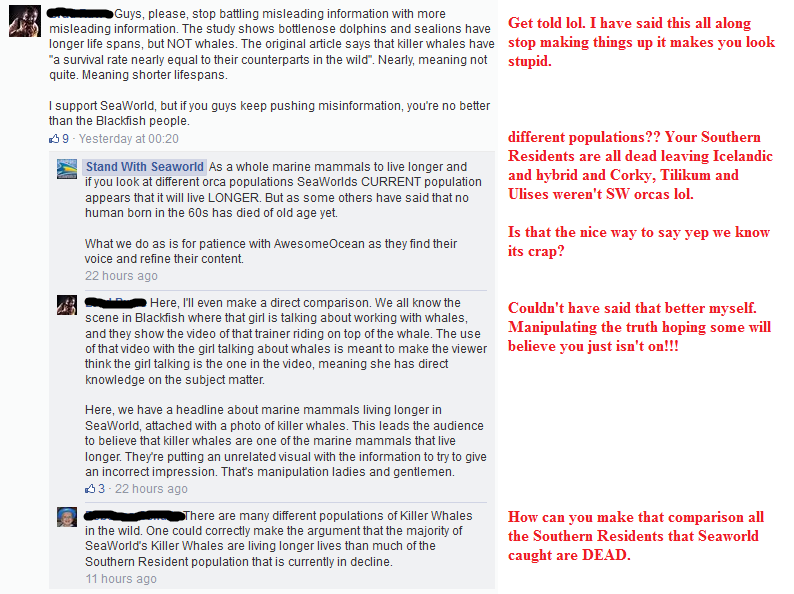 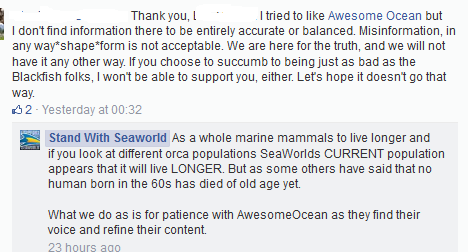 Hopefully now it will open those people's eyes and let them realize that when people like myself have said 'its a lie' or 'its not true' that is  because its a lie and is it not true.