As I was sent this message from Mike Madsen -I thought it only polite to reply.


Here's something else ridiculous for you to chew on http://awesomeocean. com/2014/07/02/why-b lackfish-is-wrong/. Enjoy.
My reply is as always in red.

Whenever I see a photo of a wild orca on social media, they are inevitably accompanied with comments from activists in the vein of: These comments are just the most visible manifestation of a dangerous mythos: that the lives of marine animals in reputable aquaria like SeaWorld are difficult, painful and unhappy, while their wild counterparts have long, peaceful, existences free from the intrusions of human involvement.
The "Blackfish" led insurgence of orca activism in the last 12 or so months has had one focus, exclusively, the "plight" of the SeaWorld killer whale, and the alleged horrors of life in a tank. From the "documentary" to social media driven "empty the tanks" days to endless press appearances and Internet reports, the "Blackfish" movement has campaigned against orca captivity with all the force and pseudoscience the activists can muster.
And while people print "Free Tilikum" t-shirts and stand in the San Diego sun holding crude cardboard signs, Washington's Southern Resident orcas die.
Firstly - as you can see from the picture below, ' orca activism' isn't something that came along with Blackfish, people were protesting a long time before then, even from the days of Namu. Blackfish was made to look into reasons why Tilikum killed Dawn Brancheau and that wasn't until 2010. People jumped on Seaworld's anti Blackfish platform without really thinking about it as it was a threat to Seaworld and helped break down what many people already knew and Seaworld had tried to keep secret. The good thing is though that now Seaworld are trying so hard to protest it they are uncovering their own lies, and if it was such a load of rubbish, surely a company with so much money would have sued the makers, not just complained. 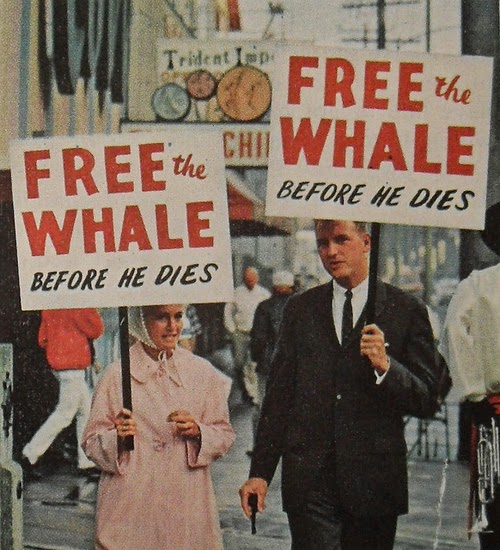 Earlier this month, NOAA released a 10-year special report on research focusing on the endangered orca population. After a decade of research into the whales and the community around them, they have found several deeply disturbing conclusions, the most alarming of which is that the Southern Resident orcas are among the most polluted marine mammals on the planet, with the highest concentration of pollutants present in the younger animals.
The sad truth is that 82 "free" wild animals are carrying around poisoned blubber reserves, while the "Blackfish" activists focus singularly on SeaWorld and ignore the demonstrable plight of the Southern Resident orcas.
Once again you seem to miss out a lot of information which then misleads people reading from your website.
The Southern residents do carry pollutants that is true but it doesn't mean nothing is being done about it, and most of those pollutants come from the land in the areas they frequent.
This is what the report actually says, unlike on your website, people sometimes like to see the evidence for themselves, so  the link is HERE

This is the solution currently being worked on to address the pollutant issue, you can also see that on the NOAA link above. 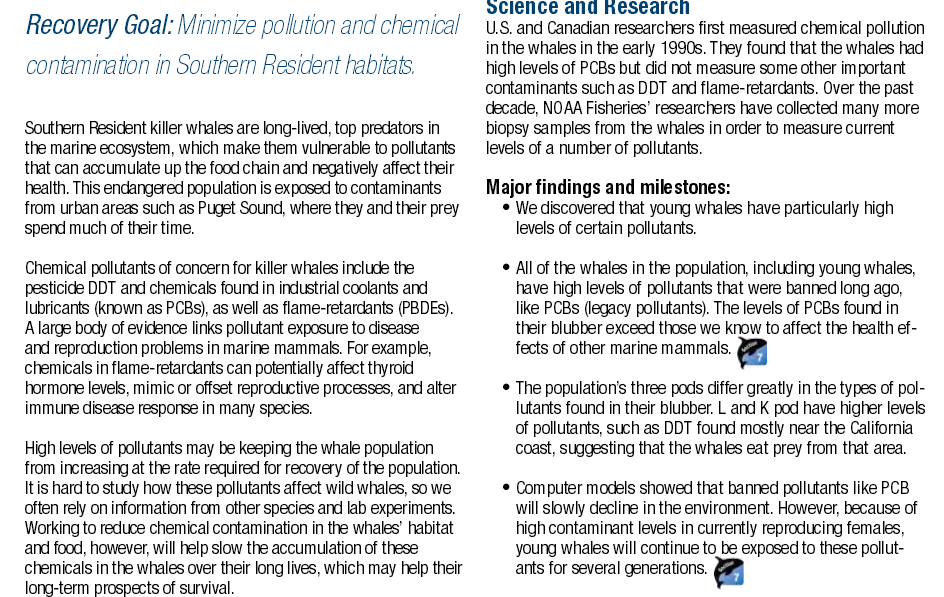 These resident whales face a huge depletion of resources as humans plunder the seas forever-increasing quantities of seafood.
This is the research on the fish 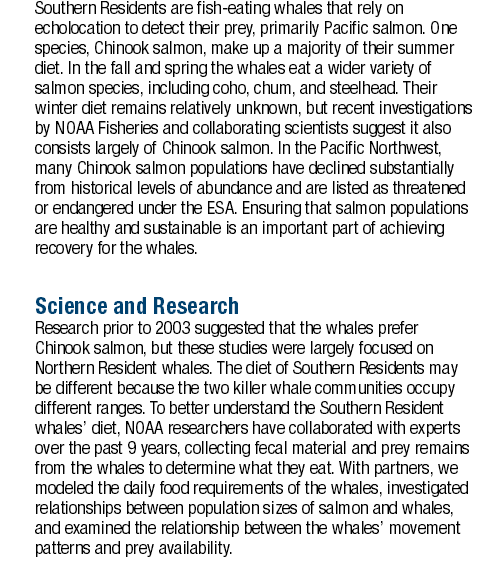 Please take not of the last sentence too despite what Seaworld has you believe, scientists were able to calculate the daily food requirements of the whales, proving they dont need to be in a tank to find that information out!

According the NOAA study, the whale watching business is booming and because of that, the noise pollution and traffic disrupts their natural feeding patterns. Despite existing regulations designed to limit increasing incidents of boat strikes, captains looking for a quick buck ignore the law for the sake of getting closer to the pods.
Once again this is very misleading of you NOAA didn't say anything of the sort, they said the whale watching vessels were compliant and the problem out of compliance are the recreational boaters i.e. those in their own boats out for the day like Sunday drivers. 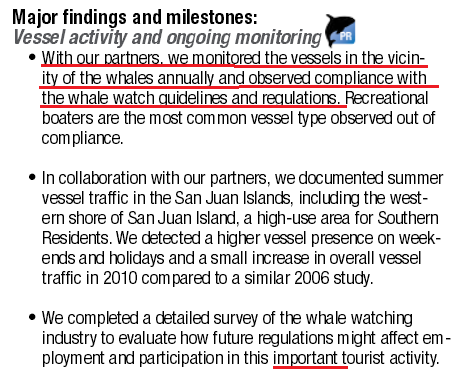 A shocking result is that the whales have to move more and eat and rest less. Calf mortality is around 50% and adult mortality is increasing.
You can also see from the report that they didn't even mention whale watching boats in their concerns, they stated

The inland waters of Washington state and British Columbia
are highly urbanized areas with significant vessel traffic from
container ships, ferries, tugboats, recreational boats, and fishing
vessels, and are also where the whales spend much of their time
in the summer and fall 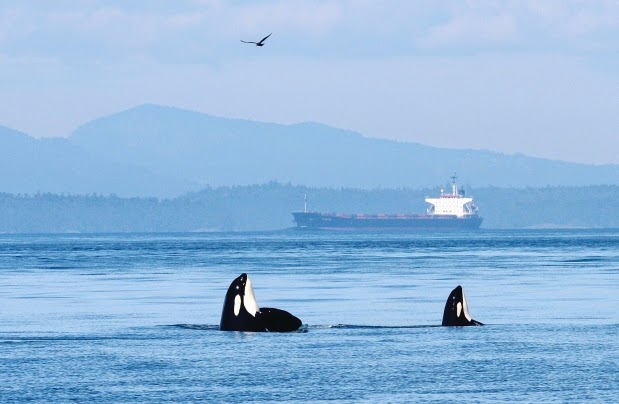 As you can see from the picture above, there is a vast difference between commercial traffic as in the huge ship above and a whale watching boat.


And who knows about this?
Who is paying attention to the disturbing plight of the Southern Residents orcas?
How much outrage was generated by the 10-year scientific study that proved that this pod's very existence might have an expiration date?
The newly converted armchair activists sure aren't. The movie didn’t tell them to.
It’s not on the agenda.
It's the wrong battle and it's flat out selfish.

Did you comment on the petition here, as thousands of armchair activists did?

Did you do anything about this as PETA did??

Did you do anything about the delisting? Howard Garrett who appeared on Blackfish did

Orca network campaigns for the southern residents, do you?

Even I have written about the Southern Residents have you?

Need I go on with the list?  The reason you THINK no one is paying attention is really because you haven't been paying attention yourself if you had been you would have seen all the information above already and wouldn't make statements that 'armchair activists' do nothing, when in fact that is the case for yourselves. You tend to do what Seaworld tells you, they even send emails out in the Seaworld truth team emails telling people what to put, that is embarrassing and shows what little faith they have in your own intelligence.

The plight of wild orcas and other marine life is largely ignored because it doesn’t raise money. It doesn’t’ sell tickets. It doesn’t get headlines for those with a questionable regard for the truth. Being outraged over the state of wild animals involves studying the plight of wild animals, which is admittedly more difficult then typing a rude comment on the SeaWorld Facebook page.
As above I can continue the list if you wish and I find it difficult to believe anyone gets to type any sort of comment on a Seaworld page as they block anyone challenging them, thank god for twitter!

But as SeaWorld's detractors sing the praises of sea pens and refuse to acknowledge positive reinforcement animal training, the lives of the southern resident orcas become more and more difficult. When taken to its logical conclusion, this trend shows that someday the armchair activists may look up from their angry Instagram debate to find that the SeaWorld orcas are in fact, the only orcas remaining. Because that is the path we are headed on unless we enact change. More science and more action is needed to protect Washington's whales. And the true animal activists will take off their "Free Tilly" t-shirts and prioritize that battle.

The activists as you see above are the ones who HAVE been forcing change for the Southern Residents, of course you will not hear Seaworld mentioning them very often as they were one of the main causes for their demise.

See for yourself what Secretary of State Ralph Munro had to say and evidence that despite what Seaworld say now about being personally named in the court cast, they WERE named and asked for an out of court settlement. One more lie to add to Seaworlds list of errors.

Whether you are for or against Seaworld, petitions like those above are out there and have forced change especially the one NOAA threw open to the public, but you and people like you have been so focused on trying to diss Blackfish and have fallen for the Seaworld distraction tactic that you have let them go by and not contributed to any of them.

Seaworld orcas will NEVER be the only ones remaining as in 50 years, 45 of them are already dead and they died before Blackfish was even thought about.

This link also shows you that cetaceans CAN AND HAVE been released so don't believe everything Seaworld tell you as if you look in the right places you will soon find that a lot of it is NOT true, there are a lot of provable lies and as in this case, because your focus have been deliberately kept on Blackfish it has blinded you to things going on elsewhere, so this article makes you look a bit silly to be honest as just because you were not aware of what people have been doing for the Southern residents doesn't mean it hasn't been going on.