Too often, social media announcements of such acts are met with outrageously misguided accusations suggesting that “rescues aren’t conservation,” that this is simply a ploy on SeaWorld’s part for better press coverage, or that even more ludicrously, SeaWorld is “imprisoning” wild animals under the “guise” of rescue and rehabilitation.
Do Seaworld give lessons on how to twist up information to try to cause confusion, as you must be top of that class!!  The posts I see state that rescues have nothing to do with those captives and that is because they don't!!
Let’s set the record straight and head back to Rescue and Rehabilitation 101.
Yes lets
1. SeaWorld is under no financial or legal obligation to rescue/rehabilitate animals. They aren’t bound by law, they aren’t paid to do it, there are no "Powers That Be" ordering the company to funnel resources into costly, complicated and dangerous animal rescues. The cost of a turtle rescue alone, ONE SINGULAR TURTLE, can be thousands of dollars. Despite this, SeaWorld is the largest system of animal rescue and release in the country and they VOLUNTEER to do it.
That’s right, SeaWorld’s rescue and rehabilitation program is actually the world’s fanciest animal volunteer program, staffed partially by animal care employees and partially by rescue volunteers. The cost of the rescue comes out of the company’s pocket. They volunteer for their placement on the NOAA fisheries stranding and rescue list.
So do many other rescue organisations who also VOLUNTEER, and the majority of those are NON PROFIT too. What seems to be a presumption yet again is that people like me don't look anywhere else for information. Unlike yourselves who rely on Seaworld for your information or just miss bits out entirely, people like myself spend a lot of time on NOAA, because unlike yourself people like me don't see Seaworld, who lets be real have a business to protect as being all knowing and unbiased in their reporting of things. Rather than believe everything we are told we go to source to check it out for ourselves. You as in your last article obviously do not and mislead many others too, which is unfair to them, to Seaworld and to the likes of us.
And since we mentioned NOAA let’s clear some things up there too.
Oh yes lets as NOAA is a great resource

2. The government decides who rescues, rehabilitates, holds and releases animals. Not some evil corporate executive in a darkened office. Remember many of those you call are scientists who work with NOAA so that is common knowledge Erin. There is a very clear set of legal protocol that determines what animals are suitable for release. It’s a 114 page document called the Standards of Release, available online for all to see, No link?  and it completely shatters the myth that SeaWorld can hold any animal they want after rescue.
NOAA have a Rescue Release and Rehabilitation document here as once again you provide no links to anything, is there something you don't want people to read? 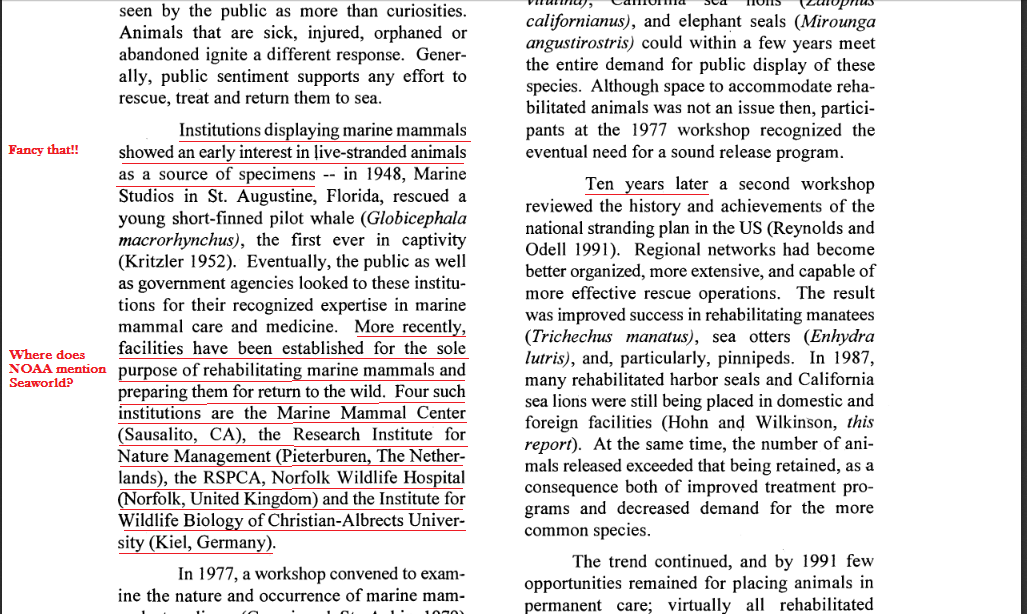 The government controls rescues and releases because the animals that SeaWorld rescues all fall under federal jurisdiction.  All marine mammals are covered under the Marine Mammal Protection Act of 1972, and some, as well as sea turtles and some birds, are covered by the Endangered Species Act. The procedure for rescuing an animal goes something like this: 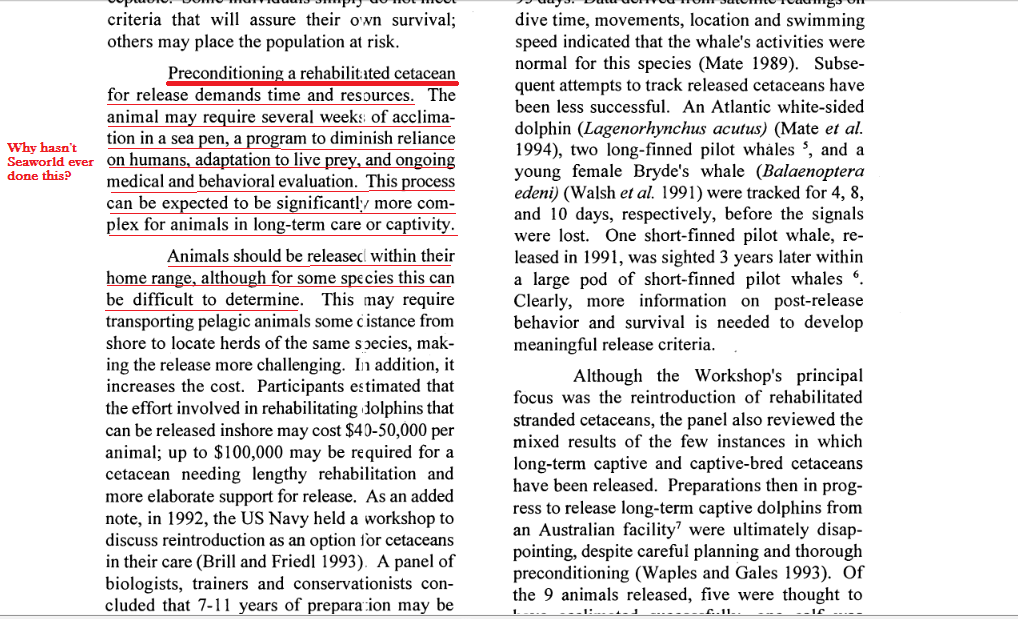 These protocols were put into effect after 1990 and they are now the letter of the law. Keeping an animal that NOAA determines releasable is against federal law, as is releasing one that is determined nonreleasable (we’re looking at you, Ric O’Barry.) Well you would, but amazing that you haven't looked at Ric O'Barry and he has been releasing animals for over 40 years and you look at him now as he spoke out against Seaworld lol.  Anyone familiar with the federal legislation can see that the rescue program is not a weak guise for animal kidnap and to suggest it is bordering on a conspiracy theory.
I think it would be only fair if you showed all the evidence you have found to back up this sentence as I haven't seen it and believe you have twisted this to suit your own ends again. Thats if you can supply it as you never seem able to correct or supply evidence to any other ''mistake'' that you have made.

3. SeaWorld has the largest and one of the most advanced rescue programs in the United States.
And guess what? It’s all out of pocket. 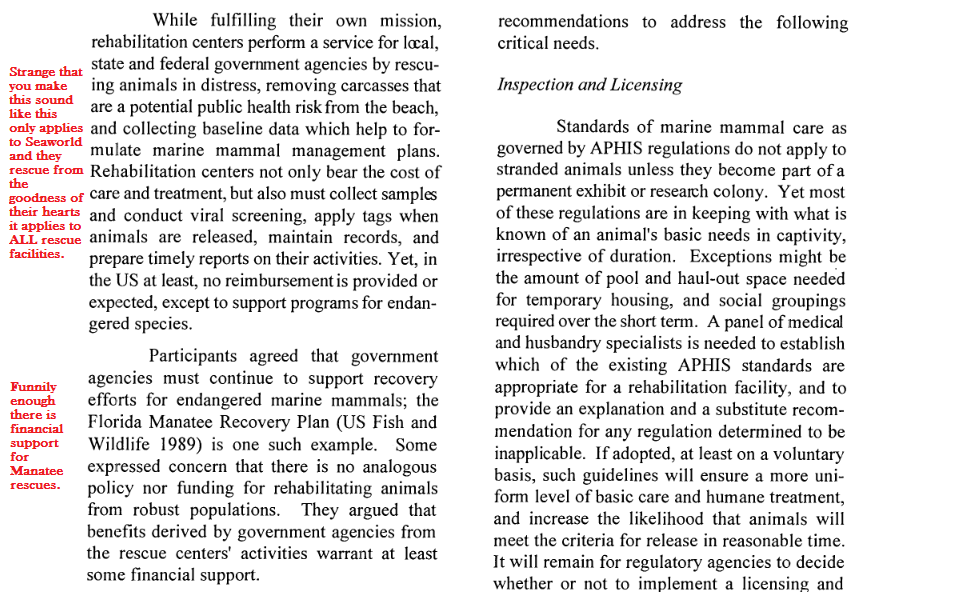 SeaWorld has rescued over 24,000 animals, more than any other animal rescue organization in the United States (and about 24,000 more than PETA ever rescued). PETA have what to do with anything?  You also need to look at the figures for other agencies involved too.

Since their very first manatee rescue in 1976, SeaWorld has been on the front lines of rescue and rehabilitation, racking up mammal, bird and reptile rehab like nobody’s business.
With many other people who incidently are non profit. As you can see the Marine Mammal Center have been involved since the very beginning and still are. See their stats here . They have also incidentally produced more research documents than Seaworld and they don't have Hubbs helping out there either.

Their rescue teams are ready for the NOAA call 24/7, including weekends, holidays, (and other times when keyboard activists take a break from “helping” animals to curl up with their pumpkin spice lattes and binge-watch Mad Men.) Keyboard activists is very ironic seeing as you have this, Stand with Seaworld, Unofficial Seaworld podcast and I love Seaworld which you write the same drivel on with no links, back up or information allowing people to make up their own minds lol.

And each one of those rescues is company funded. No catch, just conservation. Just the same as all the non profit organisations who do just as much work if not more, judging by their research documents too.
And it’s not cheap either. In fact, a rescue program of SeaWorld's caliber complete with boats, trucks, rehabilitation facilities, vets and a specialized cetacean quarantine area in Orlando and pinniped holding in San Diego can only come from a company with SeaWorld level resources. That once again is another lie, just because you are a Seaworld fan does not mean that all the other agencies disappear does it?  They’ve been able to pioneer the field of rescue, from developing pilot whale back braces to manatee baby formula to prosthetic beaks for injured birds. Their commitment to saving as many lives as possible is no joke, and it’s your ticket to the park that funds this innovation. What funds the non profits then? How can they manage to rescue, yet Seaworld needs ticket money? Pretty cool way to use your vacation funds, if you ask, you know, any sane person.

Another interesting article on NOAA - did you say everything is self funded from people's ticket money? You are wrong or misleading people yet again.


Want to learn more about SeaWorld’s legacy of care?
Don’t believe there’s a government-mandated Standard of Release?
Posted by Unknown at 17:02