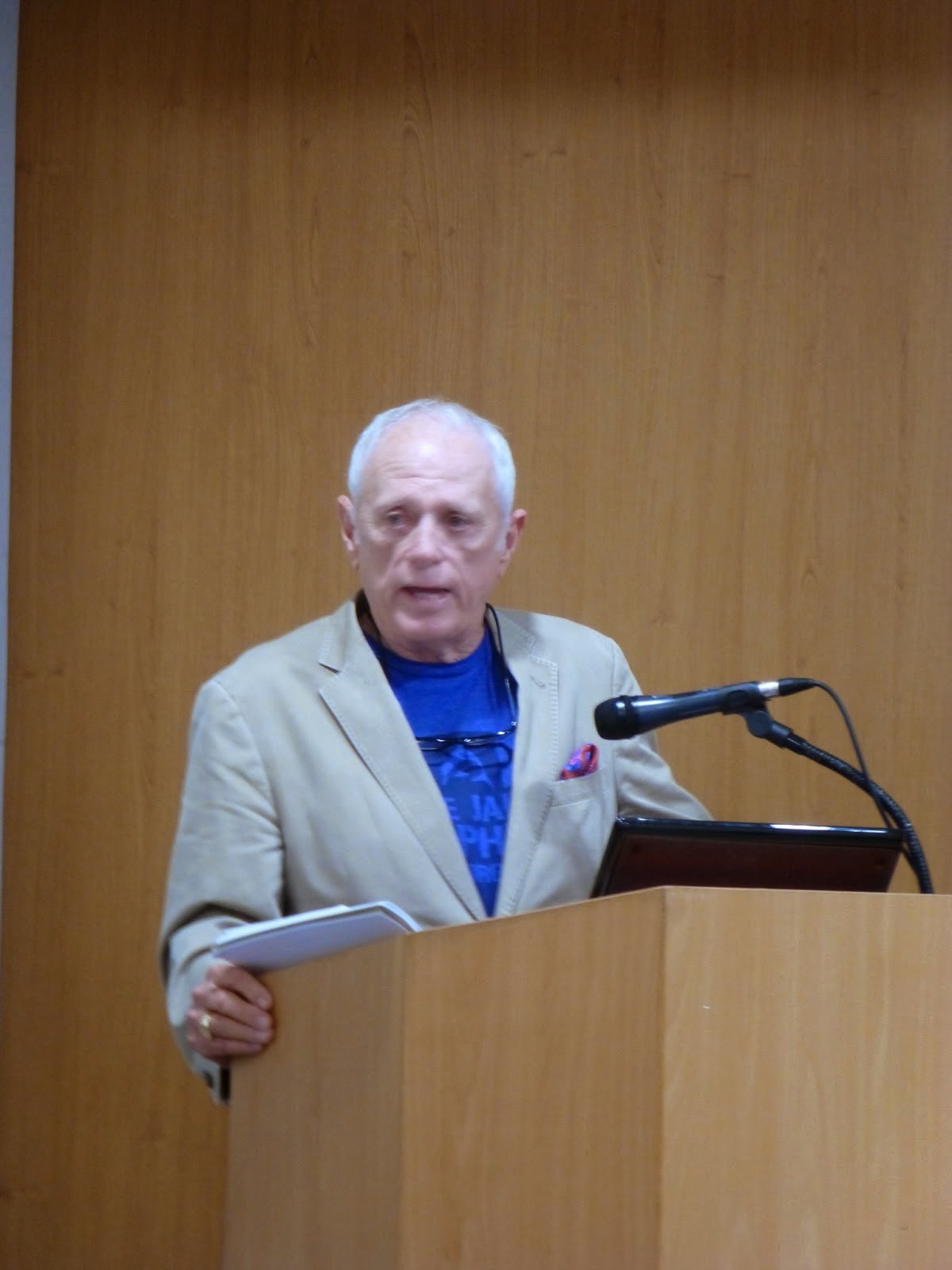 Firstly Eric you have done it again and missed out vital information, so I will add it in for you again.

Richard O’Barry, former board member of the Sugarloaf Dolphin Sanctuary, founder of the Dolphin Project,founded in 1970 from which O’Barry has since rescued and released over twenty-five captive dolphins in Haiti, Colombia, Guatemala, Nicaragua, Brazil, The Bahamas and the United States. convicted dolphin abuser, see interview below and The Dodo’s anyone can write a piece for the Dodo, even you Eric go-to guy on why SeaWorld dolphins can be returned to the wild. He has been releasing them for over 40 years, so knows if they can go or not.

Ric explains the release of Buck and Luther here     Guess who was involved in sabotaging the release - yep you guessed it Seaworld, just as they did with Keiko. Can't mind their own business I guess, read his version for yourself though.
Which one of those four things just doesn’t seem right?
Oh yes, the fact that Mr. O’Barry is a convicted animal abuser and both The Dodo and People for the Ethical Treatment of Animals (PETA) rely on his expert opinion when attacking SeaWorld feels like living in the Twilight Zone.
It's like asking Ike Turner to head up a Criminal Domestic Violence task force.
They probably asked Ric as you forgot to say
He travels the world fighting for dolphins and fighting the killing in Taiji, Seaworld does what about that?
Oh yes NOTHING as Fred Jacobs said - SeaWorld did not stop purchasing dolphins from Drives in Japan on moral or ethical grounds. Spokesman Fred Jacobs: ‘We stopped [buying] and have not resumed, not because we are ashamed, but it was not something that we cared to be involved with any more.’ And the reason they say they cannot condemn other parks
“We do not want to be accused of being disingenuous,” Jacobs explained. “If we go to an aquarium in China and say ‘You guys should not be involved,’ the first thing out of their mouths will be, ‘Well, you did it,’ and we cannot argue that point.” See full interview here


PETA called for the U.S. Department of Agriculture to send inspectors to SeaWorld San Diego to investigate the conditions of their ocras, dolphins and other animals to determine if the organization had violated the federal Animal Welfare Act.
Mr. O’Barry along with Dr. Heather Gally reported the “findings” in a PETA sponsored news conference.
An investigation - why are you getting all in a state about it then, if Seaworld have nothing to hide, they have nothing to worry about do they?

It leaves one to wonder, why would anyone listen to a man who was convicted for breaking numerous laws under the federal Marine Mammal Protection Act as an "expert" on marine mammals?
O'Barry was convicted of mistreating two dolphins in his care and then tossing them into the ocean when the authorities were coming to save them.
Like throwing away the evidence before the cops arrive. Except the evidence was two wonderful, living dolphins that could not survive on their own. They were fortunately found - malnourished and sick, begging for food. They were fined for releasing 2 dolphins and failing to notify NOAA. As Ric said in his interview above ''To answer your question, it was the only thing to do. Look, there's only two alternatives, okay? I know at this point before I release them, a few days before I release them, I know for sure they're coming to confiscate them and take them back to polluted San Diego Bay and put them into 30 by 30 cages again, okay? I know also there's no permit required to release them. As a matter of record, you will see that you didn't need a permit until 13 days after the release.''

So now, PETA and their mouthpiece at The Dodo expect you to see him as an authority on the proper treatment of cetaceans at any accredited marine facility.
Well the rest of the world sees him as such, since he was one of the first dolphin capturers and trainers and worked with and trained orca too and has since 1970 been a dolphin advocate, releasing dolphins across the world. The only person that doesn't see him as an authority is you Eric and only since he asked for the inspection with PETA. Strange that isn't it?
It just doesn’t make sense. Heck even HSUS, an organization of high disdain, dissociated themselves from this guy.


The Humane Society withdrew their support for the Sanctuary and no longer believed that the personnel there were interested in pursuing a scientific approach to release.

But since they are holding him out as an expert, we thought it was important for the public to understand who it is that is telling them what they should believe.
Every thing you have said above is from the same case of Buck and Luther  in 1999 who Rick released rather than let them go back into captivity as he had seen what captivity does to them. Seaworld should know that as they have 244 dead themselves in the 50 years they have been opened.
The following are 12 key takeaways from the case against Richard O’Barry:
See Rics explaination of the above events too he makes no attempt to hide anything. Why would he?

Note (just for kicks): O'Barry is calling on the same government agency (APHIS) that helped convict him (and he trashed) to investigate SeaWorld. The absurdity - it never ends.

That is because, that is who would investigate Seaworld, he released those dolphins to save them from a captive life which he knew would kill them and it did, its not absurd, who would you expect him to call for an inspection?

Mr. O’Barry clearly did not have the dolphins best interests in mind when he called the film crew and threw the creatures to sea. The board members, concerned Floridians, and the U.S. government have all recognized and convicted this man as someone who disregards the welfare of animals.
That isn't how it was at all, he had the dolphins, and only the dolphins interests at heart, read his version he has photographic evidence to prove it, or you could read his book To free a dolphin
If you think trying to prevent a dolphin going back to this is a bad thing then that is your opinion.

Read about them here

It is absolutely irresponsible to consider Mr. O’Barry’s advice, opinions, or knowledge of animal welfare as a source of expertise or truth.

This time you really have attacked the wrong person, someone who has the respect of many across the world, for no other reason than asking for an inspection into the state of those dolphins, orcas and walrus.  The evidence of those allegations made are below.

As you are a frequent visitor to Seaworld and have seen these things for yourself, why haven't you asked for an inspection or do you just not care? 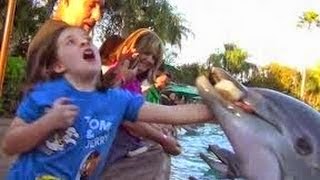 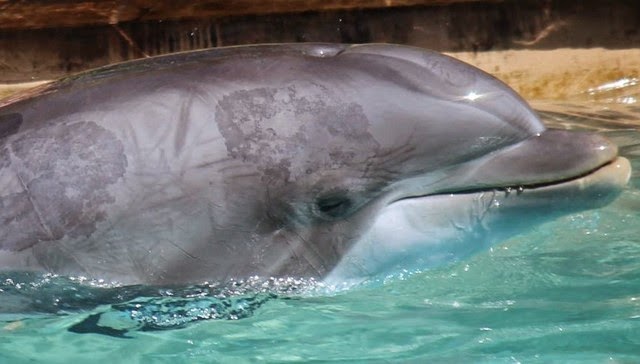 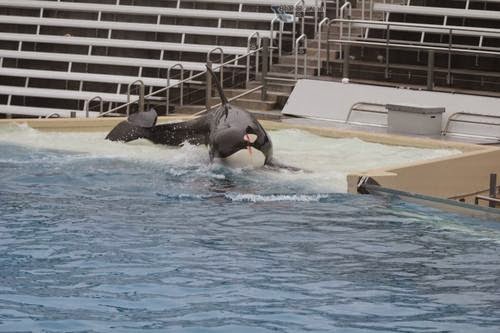 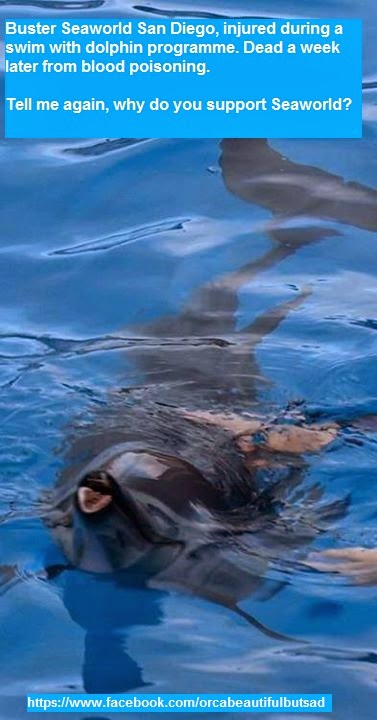 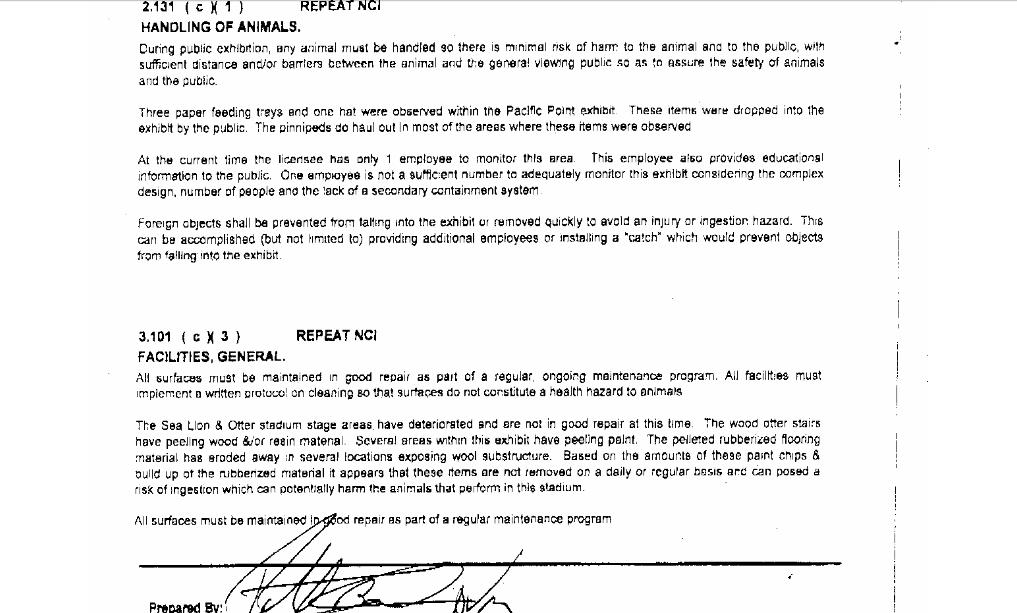 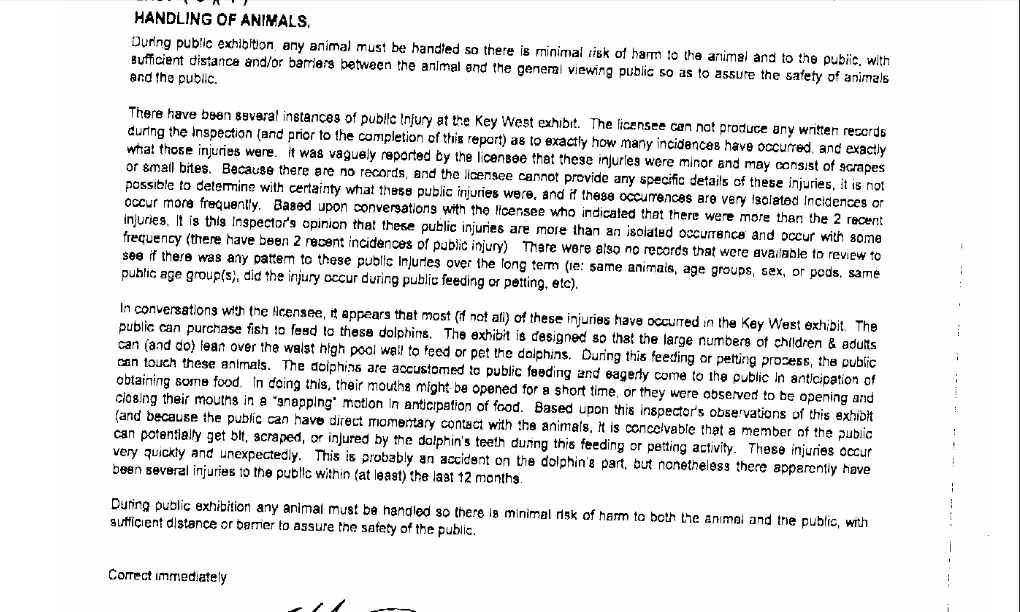 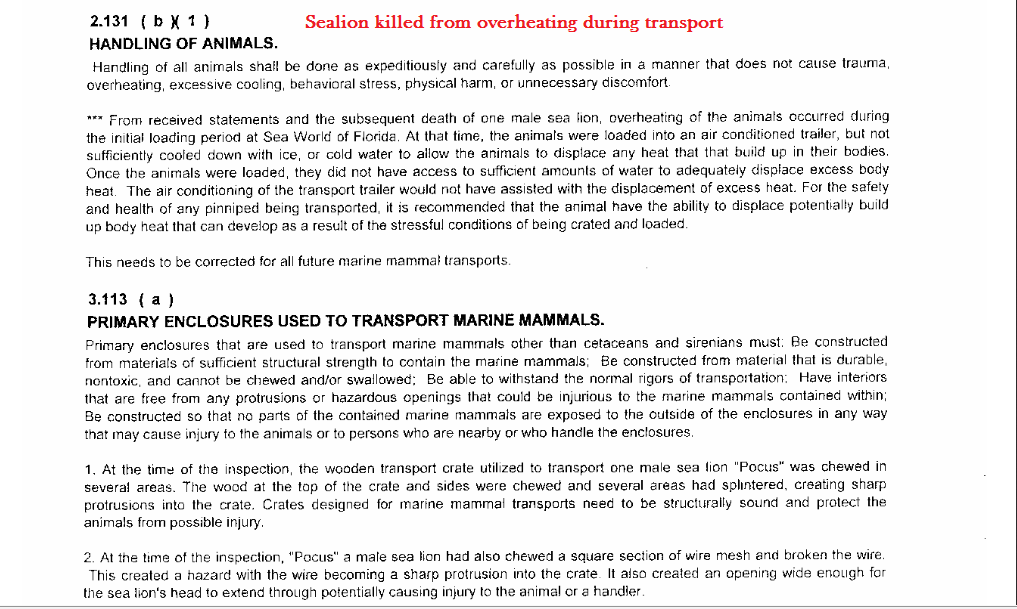 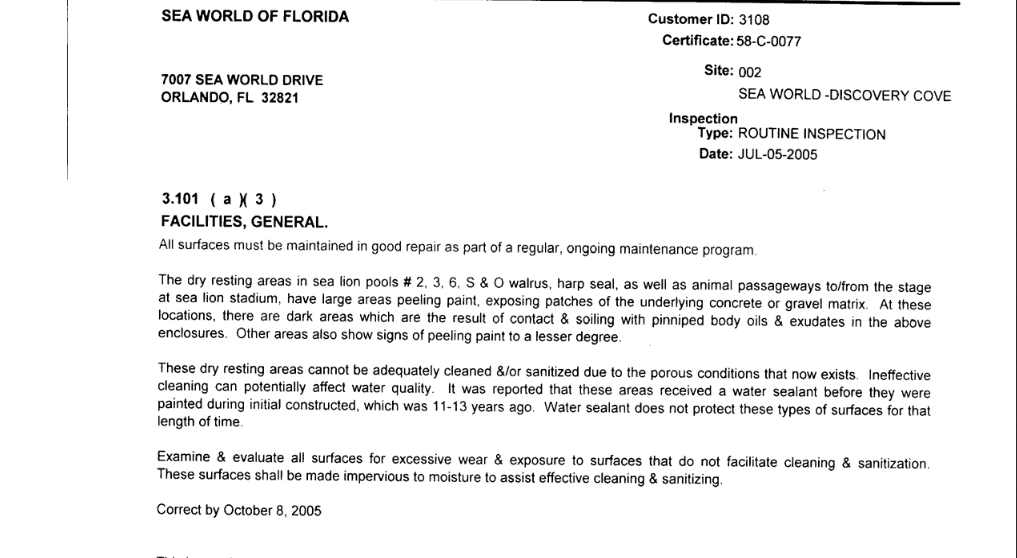 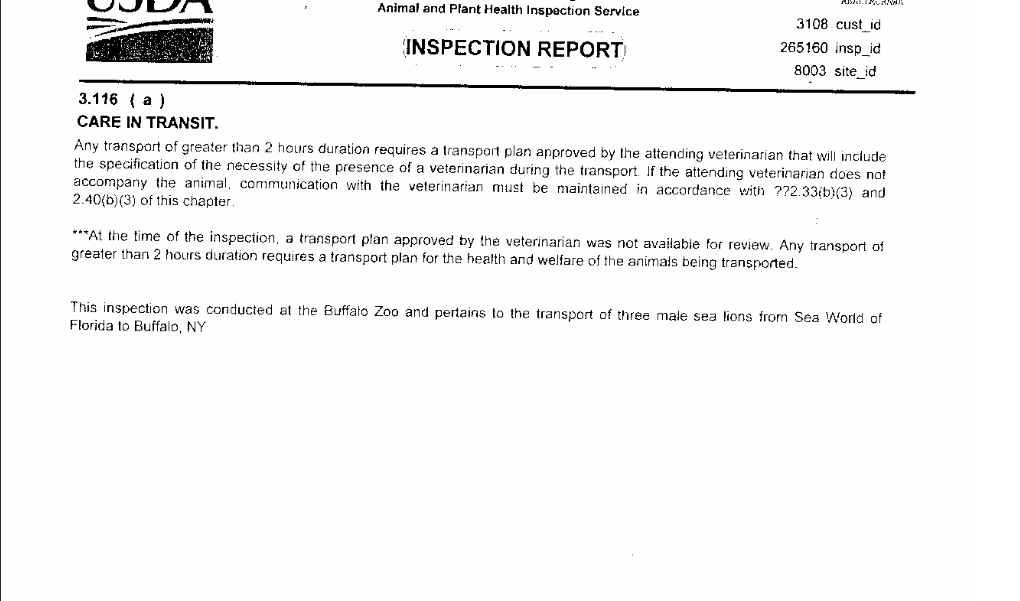 LASTLY DR HEATHER RALLY TOOK PHOTOGRAPHS OF HER OWN. SEE THEM HERE, EVIDENCE IS EVIDENCE.


For the full version of the case click here.
Sources: www.animallaw.info