When you spoke to CNN and told them they needed an experienced trainer, what was John Hargrove, you worked with him a lot?  He was in fact more experienced than you were!

When you did you Micechat interview with Eric Davis you said

Why did you not say that here??

When you say you didn't want to be a part of the activist propaganda, you did many interviews of your own in which you had a lot to say about Seaworld yourself. They all have nothing to do with Blackfish and all to do with the reasons YOU gave for leaving Seaworld, yet in the Qand A's you said it was because of family, so which was it and if it was because of family are all these interviews lies as you repeat the same things over and over.

In this interview in 2013 you said 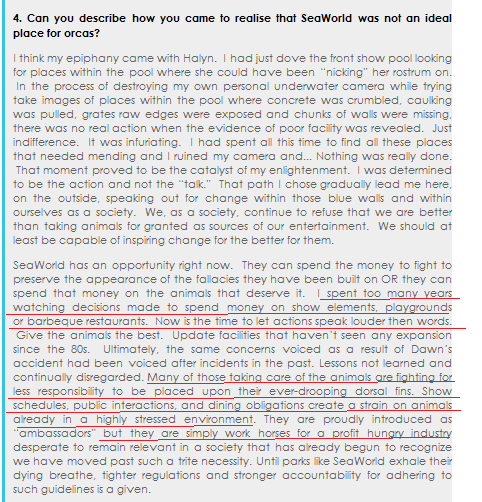 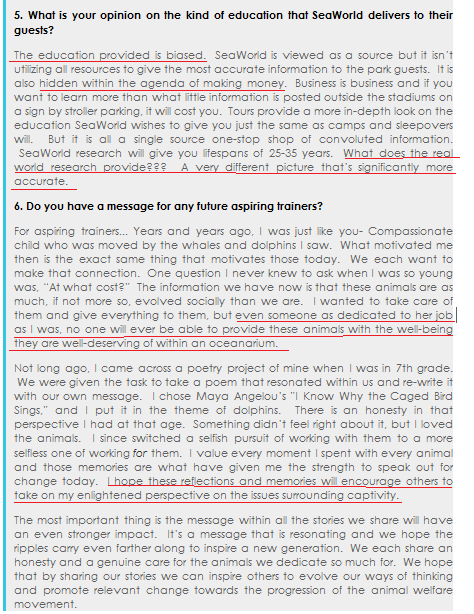 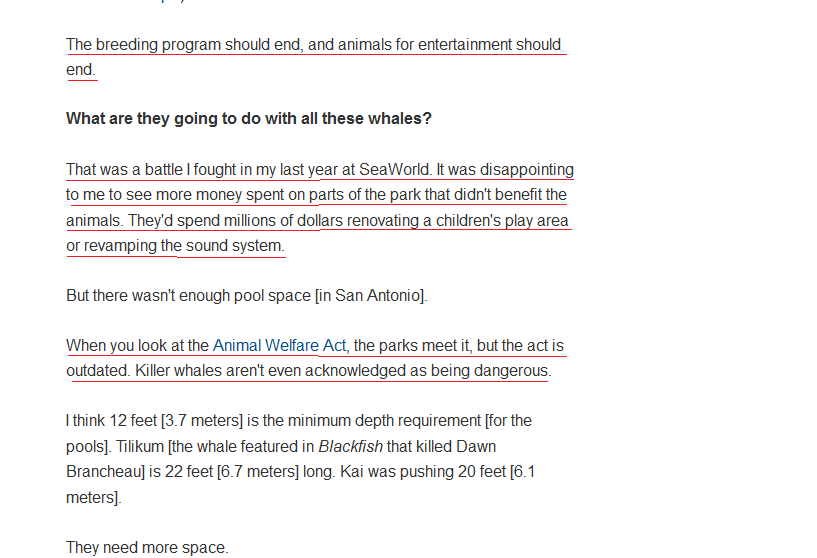 Then there is this interview with John Hargroves where you talk about how badly Unna was treated, having a fetus drop from her in a show and continuing the show! 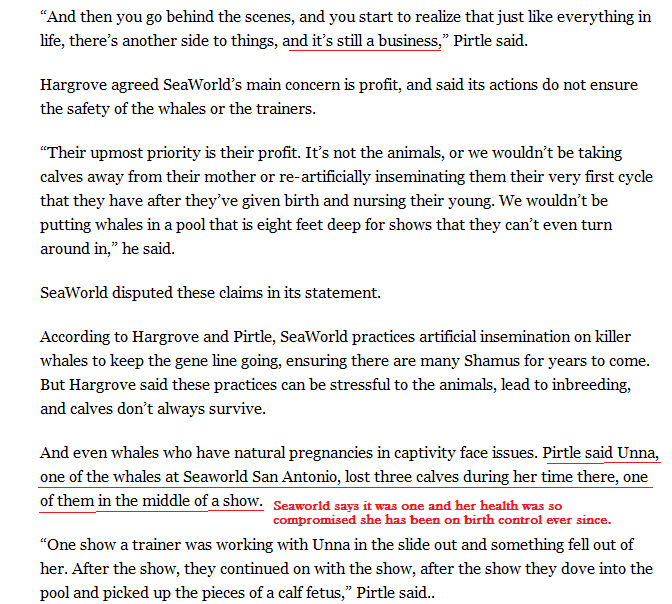 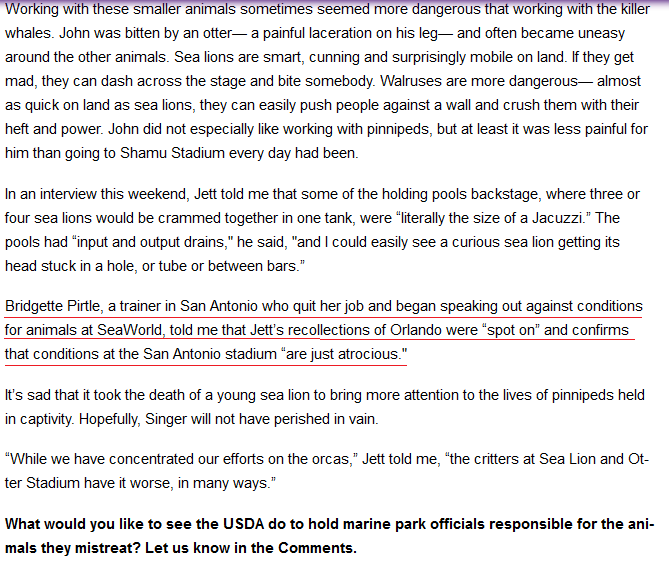 The reason I picked these 4 interviews was because the comments you made had nothing what so ever to do with Blackfish. You gave those statements as your reasons for leaving Seaworld.

Whether you had issues with Blackfish is irrelevant to any of the above interviews, so why did you say the things you did about Seaworld themselves and the way they treat those orcas??
I have asked you many many times and each time you decline to answer, if you are speaking the truth now as you say on the Q and A's then which part is truth and which is lies.

Are the reasons you give in the interviews above true?
Did Unna lose 3 calves not one like Seaworld said?
Are those orcas workhorses for a profit hungry industry?
Do you think the breeding programme should be stopped?
Do you think they should stop being used for entertainment?

None of those things were covered in your Q and A's and lets face it who really expected them to be?

Tumblr had this to say about you and I think it pretty much sums up what has been going on, one minute pro cap, one minute anti cap.

Bridgette Pirtle. ''What an interesting roller coaster she has been on the passed year. First, anti captivity, bragging about Blackfish and her claim to fame along with it. Now, pro captivity asking for her job back at SeaWorld claiming Blackfish is propaganda.
What I find most interesting is she had seen Blackfish at the premiere, way before any of us saw it. Way before it was made famous. She knew what was in it, she knew the message it sent and she knew what information it gave off. After the public outcry against SeaWorld and the trainers in the movie became a little famous and she did not, she became a little crazed.
She needed a way to get her name in the spotlight again. She chose to be one of the first trainers to go against Blackfish that snowballed into other trainers doing the same.(and sounding absolutely ridiculous, I might add)
What is her stance on captivity? She believes that her relationship with the orcas is most important piece to this pro-anti captivity puzzle. Yes the trainers and orcas have a supposed intense relationship. Whether this is true or not, what importance does it serve? It doesn’t, she just needed something to get her back into the spotlight.
It’s obvious everything she says is biased and set to her agenda. She is pro captivity when it suits her and anti captivity with it suits her. That is why nothing she says can be trusted or taken seriously.''

As for your comments on Keiko, this has already been questioned and there are numerous other people who were involved in the project with Mark who say differently to him,  and even the likes of Robin Friday said it was a success. See for yourself here .

Your reasons for leaving Seaworld and the reasons for not getting along with Blackfish are two entirely different things, and if as you seem to be now,  you are a big Seaworld fan and advocate, then either that is a lie or the statements you made about the things that happened there are lies, so which ones are they Bridgette?
10 years is quite an achievement, but people think of you as flip flopping because at the moment that is what you are doing. I was hoping for the truth but once again didn't get it as those reasons for leaving were not even addressed, how very disappointing.