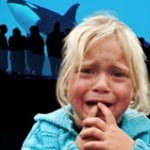 Well once again the FACTS are missing from this article by Eric Davis, which is usual to make something fit with the Seaworld PR agenda, so once again the links to the actual events are below.


When a kid in Malibu, California forced the rest of her classmates to miss out on a day at SeaWorld because she was misled by Blackfish, it made national news.
Ever since that girl forced the radical agenda of animal rights groups like PETA, The Dodo and others, they have claimed that children are rejecting accredited zoological organizations in favor of a debunked documentary. Linking back to your own website isn't evidence is it, that was debunked too here

The girl that Eric accuses of ''forcing a radical agenda'' is 10 YEARS OLD. Outrageous really that Awesome Ocean would think it is alright to say a 10 year old was forcing such an agenda, when the actual article with the Principal says -


''The overnight trip to SeaWorld has been a tradition for fifth-graders at Point Dume Marine Science Elementary School in Malibu, California, for at least a decade, according to Principal Rebecca Johnson, but concerns from parents and students including one determined 10-year-old prompted a decision to go elsewhere on this year's trip.


Although Johnson mostly credited parents for influencing the change, several parents CNN spoke with said 10-year-old Kirra Kotler played a major role in the decision.''
The full article is here 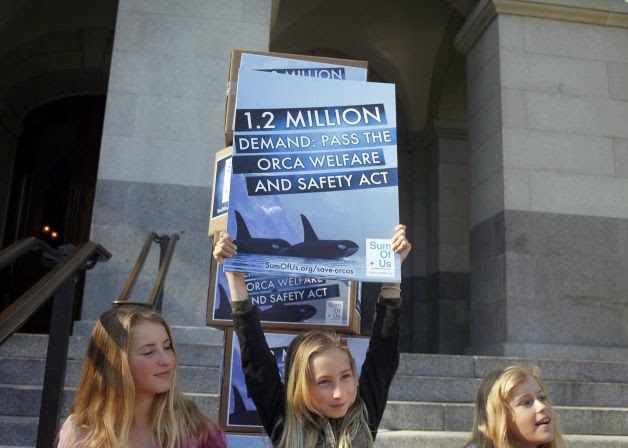 Lets hope  Kirra doesn't read what Eric Davis says about her due to her young age, guess no one not even a child is entitled to an opinion different to that of Seaworld's!!


However, we are learning this isn't the case, and in fact quite the opposite is happening nationwide!
Children of all ages are rejecting the radical agenda being shoved in their faces and asking for alternatives. Not only are they analyzing the source material the school is presenting to them, they're demanding they be allowed to think critically by hearing both sides of the issue, which is a victory for anyone interested in education.
Hearing both sides of the story is a fantastic way of teaching the kids of today, schools will look up official documents and check all their information as that is what schools do. It certai ly will be an education as they will see Seaworld for exactly what they are which is what happened to most of the people who oppose Seaworld now. They will see that those who write blogs trying to support Seaworld pass the blame ON Blackfish or onto PETA, but the bottom line is PETA don't have captive orcas in tanks do they? Seaworld DO. Children have very inquiring minds and the penny will drop with them the same as it did with all of us that Seaworld are actually using PETA as the distraction as people don't like their kill policy, but at the end of the day their kill policy has nothing to do with why people protest Seaworld no matter how much the support pages like this one bang on about it .

Here we have a few stories of kids who are standing up to radical activists and demanding that they hear the full story and learn the truth:

Bear in mind the sentence above says ''kids who are standing up to radical activists'' when this article is about a 10 year old girl.
I would be ashamed to label a child as a radical activist but Eric Davis and Awesome Ocean don't care who they call in their desperate attempt to try to make Seaworld seem relevant. It is shameful.

When one of Austin's teachers announced that they would be required to watch Blackfish in school, Austin stood up and demanded that they allow a SeaWorld trainer from SeaWorld San Antonio to come in afterwards to comment about the film.
The teacher responded, "We don't have time for that." Austin quickly countered, "Then we don't have time for Blackfish." The teacher agreed and the class was spared 80 minutes of out-of-context YouTube clips and propaganda.


When Chris learned about the new book "Killing Keiko" by Mark Simmons, he went straight to his school's library. When he found out it wasn't available, but other radical animal rights books were, he kindly asked if "Killing Keiko" could be included. The librarians happily agreed and ordered the book. It is now available to all the students at his high school.

Christophers photograph removed at his request, (see comments below)  still visible in the Awesome Ocean article.

We have begun to learn that students in Florida, California, Idaho, Utah, New Jersey, New York, Pennsylvania, Ohio, Michigan and more are all requesting that their libraries stock Killing Keiko.

Stocking it and believing it are still 2 different things. Children will know there are many articles about Keiko which they can check and compare against as I did here.


Nikki vs. The Debate Team in New York, New York

Nikki hasn't asked for her photograph to be removed but I removed it anyway it is still visible on the Awesome Ocean original article.

When Nikki learned that her debate team would have to debate "Pro: SeaWorld should be closed" she had to fight other class members to represent the "Con" which was to defend SeaWorld in the debate. After days of research and preparation, she ended the debate convincing numerous audience members from the rival school that SeaWorld does incredible good in the world and should NOT be closed!
These 3 stories are just the tip of the iceberg. There has been so much interest in SeaWorld's real story that SeaWorld has been piloting an education program that would allow their trainers to virtually talk with any classroom about the amazing animal care their animals receive.
It is a new era and children around the country are demanding that they get to hear both sides and learn the truth!

From the looks of some of the articles from Children and teens that Eric has chosen to miss from this biased article yet again, Children are indeed learning and hearing both sides in order to make a decision.

The newest child to speak out is 13-year-old student Phoebe Goldstein.
But this year at Alexander Dawson School in Lafayette, the itinerary was questioned by 13-year-old student Phoebe Goldstein. Every spring the school offers a variety of educational trips to both domestic and international destinations. This year, one option was going to San Diego to study species diversity with a stop at SeaWorld. As an animal activist, Phoebe was vehemently against supporting SeaWorld and made it her mission to eliminate that excursion. Officials at the school took notice, and worked with Phoebe, ultimately deciding to remove the outing. Full link here

Teen link writes an article about The Prisoners of Seaworld

13-year-old Max Guinn challenged Seaworld to a debate. Four years ago, he and his mother co-founded Kids Eco Club, which has helped start environmental groups in more than 100 local schools -- reaching 20,000 students. 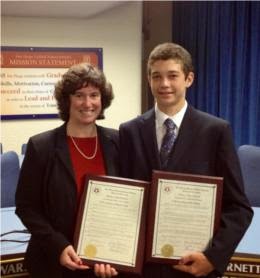 "Dear SeaWorld, thank you for all your amazing memories,” a young woman begins. "The Shamu show…" says another student. "Dolphin point…" another says. One student thanks SeaWorld for "all the cute, cuddly teddy bears."
Then narrative takes a big turn.
A student explains that, "after watching the documentary Blackfish on CNN..." then another student picks up the line "…all of those memories have been totally cheapened."
Then come the hard-hitting questions.
"Is it true the orcas in your exhibits were kidnapped from their families?" asks one student. (The film’s star orca, Tilikum, who killed trainer Dawn Brancheau in February 2010 at the Orlando park, was snatched from his mother’s side in the waters off Iceland in 1983. In the subsequent 30 years, the 12,000-pound marine mammal has sired 54% of SeaWorld’s current orcas.)
"Is it true their lifespan is shortened in captivity?" asks another student. (Annual mortality rates for captive orcas are two and a half times higher than for wild whales).
"Is it true that there have been multiple attacks on trainers in your parks?" yet another asks. (The answer is a resounding yes, and will be the subject of oral arguments in federal appeals court in Washington, D.C. on November 12).
"Until these questions are answered,” the students continue, "there will be no more admission tickets... no more rides... no more teddy bears."

Times of San Diego report
Bethany Fullerton of San Diego, a 15-year-old sophomore activist against SeaWorld, is a finalist for 2014 Cutest Vegan Alive. 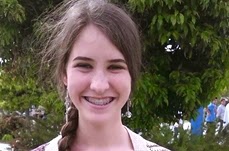 Zach Affolter was bullied being called a punk amongst other things by Kogo for asking his school board to cancel trips to Seaworld . Much like Eric Davis had done here with this 10 year old girl, calling her names too. 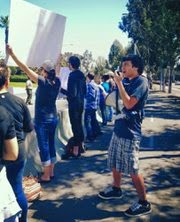 Parents speak out against Seaworld 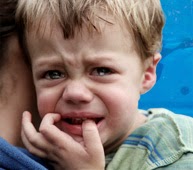 Rose McCoy  aged 12 The seventh-grade honors student was arrested at the Rose Parade in Pasadena, Calif., on Jan. 1 after darting in front of a SeaWorld float 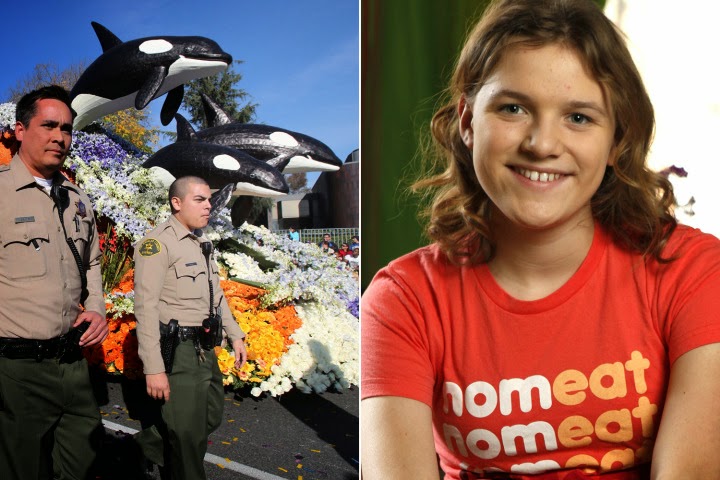 Rose doesn’t plan to stop fighting for killer whales. She and her classmates at the Clinton School for Writers and Artists in Chelsea have formed the school’s first animal-rights club and plan to spread awareness of “Blackfish.”

In 2012 A judge ruled against Seaworld form
''The Florida Supreme Court ruled in 2008 that parents can't waive liability if their kids get injured in these activities, but still places like SeaWorld won't take our kids unless we sign the documents. Fortunately judges seem to understand that a parent does not send her child to SeaWorld in the expectation she may never see her again.''

There are many many children out there against Seaworld who are NOT radical activists and don't deserve to be called as such. It is about time Eric Davis, Awesome Ocean, Stand with Seaworld, Seaworld Podcast and Seaworld themselves realised that people have strong opinions and reasons to not advocate for Seaworld anymore and calling them names in any form whether children or adult is not called for, nor does the Seaworld PR machine any favours what so ever.

Seaworld and the social media sites above chose not to engage with those people, block them, delete comments,  not to answer those children and to resort to name calling as a means of defence. Regardless how much they try to deflect the attention onto another organisation those focused on doing the right thing for those orcas know that they protest because of Seaworld themselves, not because of PETA or Blackfish but because of Seaworld and the quicker those who resort to calling a child like this realise that the better it will be all round.