Kamogawa to AI orcas with Seaworld's help and sperm

Kamogawa Seaworld has released a statement saying that their orcas are to be AI'd with Seaworld USA help and sperm.

Kamogawa is right on the ocean and a sanctuary could be set up for them or as they are all pure Icelandic they could be rehabilitated back to their home waters as although Bingo and Oscar are deceased, Stella who was wild caught and mother and grandmother to the pod is not. 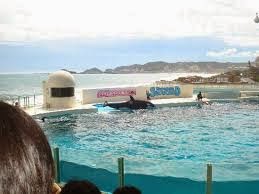 As you can see from the link here  many of Seaworld's orcas are hybrid with no conservation value what so ever, they should never have been allowed in a reputable breeding programme as they can never go back to the open ocean. This cannot be allowed for Kamogawa orcas who could be at the forefront of rehabilitation for these creatures without much disruption to their park.

''Imported from growing animal welfare conscious animals of becomes difficult, and in various parts of the zoo is worry about the breeding and population maintenance, Kamogawa Sea World (Kamogawa, Chiba Prefecture) artificial insemination of a killer whale is still no example to other than the United States to, for the first time I work in Japan. All the killer whale seven  in breeding in the country located in the blood relationship, it is because you can no longer natural breeding. In cooperation with the United States of aquarium where there is a track record, with the aim of success. (Yuzuki Mari)

Sea World in preparation for the artificial insemination, has been such as training to examine the estrus were collected urine a killer whale lies on the stage. In artificial insemination to take the method of injecting the female that was a lie frozen sperm. Frozen sperm to be used, but are likely to be those of the US Sea World, which is also the sister aquarium Orca.
Kamogawa Sea World at the same time in 1970 of opening and, first to start a killer whale breeding in the country. Breeding was also successful, twenty one on one year beginning triceps the "Bingo" of the male, to the Port of Nagoya Public Aquarium (Nagoya Minato-ku). Bingo died in August this year, domestic orca was just a child or grandchild of bingo.
Killer whales that have been bred in the world is about fifty head. Is captured and importers became difficult due to the influence of such as the United States of marine mammal protection laws.
Thirty years or more veterinarians Katsumata Etsuko of Sea World that we have seen the killer whale is stressed that "To promote the breeding without moving the killer whale of fifty head of the world, artificial insemination is essential". Nichito (knit) Hiroshi director of the Port of Nagoya Public Aquarium has said, "How do we hold the pedigree in the whole world, a big challenge".

Many, such as headaches Zoo to issue or decline of inbreeding reproductive capacity due to aging, in an effort to maintain the number of individuals it by lending the animal at home and abroad.
The number of breeding individuals of Japanese Zoo is the around 1,980 to 90 years was the highest. Attract highly effective animal not let go of the facility side, cooperation between the facility was not thriving. Currently, according to the Japanese Association of Zoos and Aquariums, animals that zoos and aquariums high scarcity is working on breeding lent aggressively about hundred and fifty species. Giraffe and Asian elephant, familiar animals often as chimpanzees.
Is one of them koala three decades has begun breeding in Japan. Aging population, the number of breeding is to peak the ninety-six animals of '97, was reduced to forty-three animals last year. Koala wild in habitat of Australia is reduced, some states that you specify in endangered species.
Although imports was difficult, the country this year, to commemorate the visit to Japan three decades, Saitama Prefecture children Animals Nature Park (Higashimatsuyama) and each three little in Kagoshima City Hirakawa Zoological Park, One Animal Higashiyama Zoo (Nagoya) it was decided to donate.
Ueno Zoo (Taito-ku, Tokyo) is promoting a plan to lend still a female Shoebill there is no breeding example in Japan, the US Florida in Tampa, Lowry Park Zoo is breeding research advance. Worldwide success also two cases only without, and hopes to help the results to breeding in Japan.''

The question was raised on AskSeaworld they replied confirming they are involved in AI in Japan!

Ikaika
Is Icelandic C - mother Katina (Icelandic W) Father Tilikum (Icelandic W) but has an attack history.
Young male Ikaika has a history of aggression, often of a sexual nature, which began with an attempt to breed a young calf at SeaWorld shortly before his transfer to Canada. SeaWorld’s veterinarians then sedated Ikaika twice daily with Valium to “try to mellow him out.” “We’ve already seen some of the precursors (of a human attack) up there, meaning he’s grabbed boots, he’s grabbed targets, he’s grabbed an arm before,” Chuck Tompkins, a senior executive at SeaWorld and head animal trainer, said in an affidavit. Those are signs Ikaika is testing his environment and seeing what he can do, Tompkins told the court. “And if you’re not aware of all the little things that killer whales do, you can get somebody really, really hurt,” Tompkins said in his affidavit. “I’ve got grave concerns on the safety of the staff and inevitably the safety of the animal because of the lack of change.”
Please sign the petition, lets tell Kamogawa what we think to this, it cannot be allowed and Seaworld want to be getting the orcas out of their own tanks before messing around with someone elses.


Kyuquot -  Icelandic
He used to perform waterworks, though after several incidents, he was not allowed to anymore. He is the largest orca at San Antonio, weighing over 8,000 pounds.
Incidents
During a portion of the show, 16-year-old male Kyuquot refused to let a trainer exit the pool. He did not become aggressive, but refused callback tones and slaps, and would not allow the trainer to leave the pool. The trainer was able to get close enough to the glass to pull himself out very quickly, and Kyuquot then proceeded to fast swim around the pool, followed by sliding out at stage.
12-year-old male Kyuquot repeatedly slammed trainer Steve Aibel underwater during a show. Aibel, who was uninjured, had trained Kyuquot for 10 years. Kyuquot refused a rocket hop during a show, then repeated it well. However, Kyuquot then refused to allow the trainer to exit the pool. He then proceeded to swim over the trainer, blocking any exit from the pool for two to three minutes. He refused several callback attempts, including tones, hand slaps, and attempts at control by trainers in various positions around the pool. Once the trainer was close to the middle of the pool, Kyuquot then calmed down, finally drifting close to the stage, where the trainer was able to quickly exit.

Makaio - who is still only a youngster himself

Trua -  has an attack history
While a trainer was retrieving an article from the back of the mouth, young male Tuar clamped down on the trainer's arm and held tight for several moments.
Young male Tuar was involved in one swim over a surfaced trainer during waterwork with another young male, Tekoa. He did respond to a recall after two attempts.
Since his move to Texas in April 2004, young male Tuar has opened his mouth towards trainers on a few occasions while in the water with him. This behaviour seems to present itself when sequences are predictable, and has been during solo waterwork only.
7-year-old male Tuar opened and closed his mouth around a trainer's leg after a dive in prior to the ballet sequence of the show.

Ulises -  has an attack history
1997/10/03 Sea World California, USA Ulises
20-year-old male Ulises came out at a trainer.
2002 Sea World California, USA Ulises
25-year-old male Ulises was doing a waterwork session in “A” pool. His trainer was on his back and wanted him to move closer to the acrylic by giving him the cue to “steer” him in a directional way. Ulises did not know this behaviour. Instead, he took this as a finger roll, the trainer fell off and Ulises began to go on a descent. He ignored the trainer on the porch trying to receive him and turned around to go back towards his trainer in the water. He turned ventral and scooped her up, and then started to become erect. She was able to get off at the porch and reinforce him. He was calm.
2004/08/22 Sea World California, USA Ulises
27-year-old male Ulises was doing a Scuba session with his trainer in “A” pool (a spotter Scuba diver was also at the bottom), when he looped around, became erect, and then swam on top of his trainer. He ignored a hand slap and tone before responding to a second tone.
He became a father in 2011, when his son Moana was born through artificial insemination to Wikie at Marineland Antibes, France. He has never naturally conceived a calf of his own nor made any of the American whales pregnant.

To allow one park to corrupt the gene pool of another with aggressive orca genes and/or hybrid genes should not be allowed to happen. I will update when I find the solution to stop it.

Please sign the petition asking Kamogawa NOT to AI their orcas and put their trainers at risk of harm.